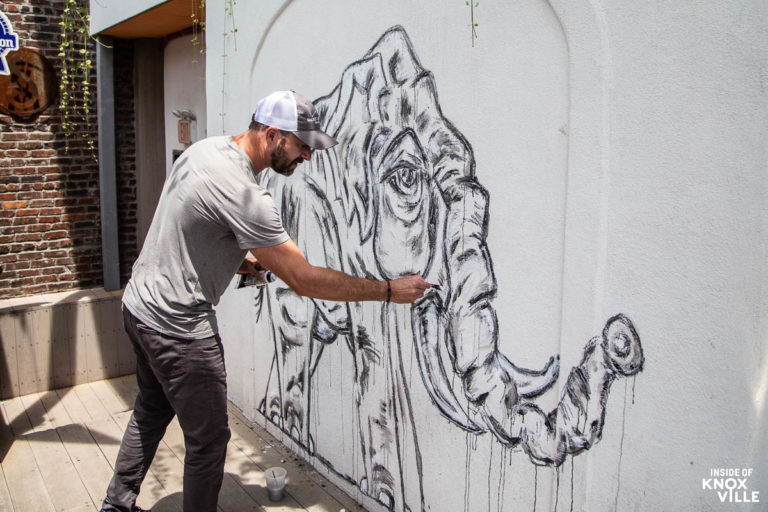 I recently had the opportunity (thanks to Scott West) to chat with Matt Shapira, film director, writer, and producer, as well as worldwide elephant muralist. Matt, best known as director of the 2020 movie The Swing of Things, a romantic comedy starring Luke Wilson, Adelaide Kane, and Carolyn Hennessy, was in town to direct his latest effort, Nothing’s Impossible. While here, he donated one of his elephant murals to the Bernadette’s rooftop, which is where I caught him in the act.

He said he began painting long ago and “became interested in elephants and conservation related art.” He started working with conservation organizations and traveled the world spreading his elephant murals. “I started seeing the groundswell impact from children to local adults, whether it was in Africa, Thailand or Nepal, or even places like Wales.” He said the murals spur conversation, “which is how it starts.”

He said, to him, elephants represent family and community. “They spoke to my spiritual and emotional side.” He paints the murals both to raise awareness of endangered creatures, as well as to raise money for the organizations fighting to protect them. He said he has done nearly 200 murals around the world. Many are in schools. He said child watch him work, then draw elephants of their own. “I think everyone should have a cause and this one is mine.”

He said it opens conversations about the treatment of the animals. It’s a natural way of doing education that isn’t didactic. He says the animals are sentient and he wishes compassion and empathy played a bigger role in education. He painted while growing up in Los Angeles and when in college, he was attracted to the impressionists because of their belief in the accessibility of art to the common man. They were rejected and “as an outcast myself, I felt like this is the world I relate to.”

A friend suggested he find his own muse, until one day he randomly painted an elephant. He put it on social media and it quickly became his first piece of art to sell. He began working on others and a friend with a wine bar asked for fourteen, which were hung on a Saturday and were all sold by that Tuesday. “I believe the elephants called me to help them.”

Matt said the drips were left on the mural because “Elephants are at their happiest when they are in a watering hole,” and he sees the drips as evocative of the water. “I also like the idea of it’s being purified. The trunk up to greet the patrons, and the strong look because the matriarch always is protecting the crowd.” He said every mural is different, different walls and locations calling for different elephants.

He said he loved painting on the rooftop and felt the elephants fit with the theme of family and hospitality found in the West establishments. They were connected by Alyse McCamish (whose movie I wrote about a year ago has moved filming back to Spring 2022), who knows the Wests and is also working on the Nothing’s Impossible movie Matt is directing. He’s left a mural everywhere he’s directed a mural.

The movie is backed by Pinnacle Peak, a division of Sony. They have finished shooting and he’s excited about the message. David A.R. White stars as a former high school basketball star who never made it to the N.B.A. as was expected of him. Now a janitor in his old high school, his former girlfriend has become owner of a failing N.B.A. team and they hold open try-outs. They fall in love, again, and “it’s about second chances. I think it is a really beautiful movie.” He says the cast, including Steven Bauer (Scarface), Harry Lenox (Black List, The Five Heartbeats), Nadia Bjorlin (Days of Our Lives) and others.

The movie is scheduled to be released December 15. The mural is available for viewing with a cool beverage on your favorite local rooftop.