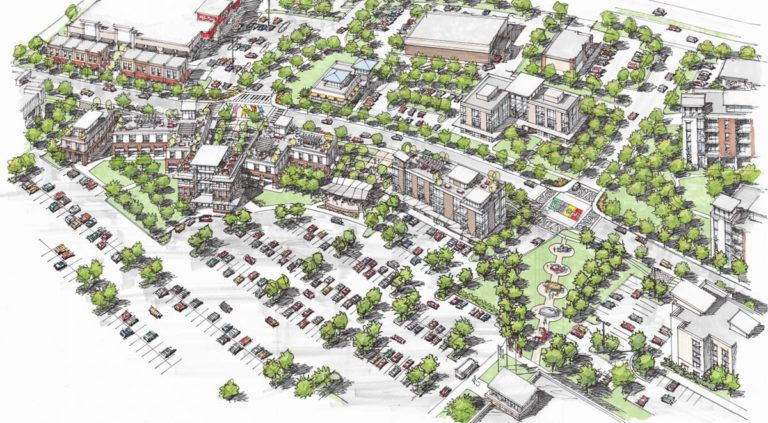 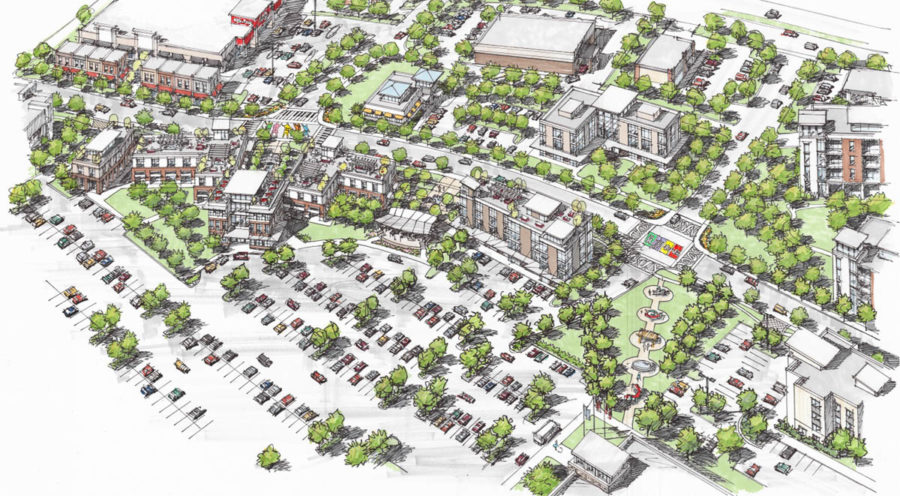 I don’t often write about other towns or cities, though I have occasionally. This one is interesting, both because it is just outside Knoxville, but also because the circumstance is unique. Where is the heart and soul of a city, if not its downtown? What if the town or city doesn’t have a downtown? And how does that happen?

Most cities are built at a major crossroads, or at a natural port, or perhaps a bend in the river. A building is built, others follow, someone suggests a grid, and the city grows. There is an “old” part of town and newer structures as you move further out. “Downtown” is generally the oldest part of town.

But what if there was no natural evolution? What if the U.S. government simply decided to build a town from scratch, as they did in the case of Oak Ridge? The city, founded in 1942 specifically for the purpose of developing the atomic bomb, grew to a population of 75,000 by 1945. At that point it was said to have more Ph.D.’s per capita than any other city in the world. It had sections for segregated housing and retail establishments, but no center. There was, and to this day, is no downtown.

After the boom years, the city population declined, maintaining at about 29,000 people and has had limited success spurring growth. There have been many plans over the years to improve the city, starting with the 1948 Master Plan, the 1973 Urban Beautification Plan, the 1985 Comprehensive Plan, the 2000 Oak Ridge City Center Strategy, and the 2019 City Blueprint. All of them called for some version of a downtown.

Wayne Blasius, who helped develop the downtown Knoxville plan decades ago, and developed several downtown properties, including the building in which I live, moved to Oak Ridge as the Director of the Community Development Department to help complete the 2019 City Blueprint, which included a vision for a downtown. Using that as a jumping off point, he arranged a design charrette which helped develop the 2020 Wilson Street Vision.

Wilson Street runs parallel to Oak Ridge Turnpike between Rutgers and Tulane. The current proposal, imagined in three phases, involves urban smart growth development along the street which is currently bordered by vacant land and parking lots. The plan is to included mixed-use development, with retail and residential development fronting a walkable boulevard and connecting to nearby neighborhoods and amenities. The hope is to both grow the Oak Ridge population, but also to grow its tax base.

I met with Wayne to discuss the vision and to walk the property involved. The city, through their affiliated Land Bank, has acquired the property to start phase one of the project. They will formally announce the RFP for the project this afternoon in another of a series of events that started last year called Toast the Town.

The new development will emphasize what makes Oak Ridge unique, with things like an atom at the center of a roundabout and DNA strand designs for crosswalks, and perhaps a sculpture of Albert Einstein, emphasizing the city’s science heritage and continued scientific work. The design will be urban, with mixed-use, multi-story buildings, nice streetscapes and a design emphasizing walkability.

For the first phase, the hope is to have 36 condos and 150 apartments, as well as 20,000 sq. ft. of dining and entertainment space. The hope is that this might be realized in the next twelve to twenty-four months. Proposals will be judged on good design and will be required to fit the vision and guarantee timely beginning and completion. 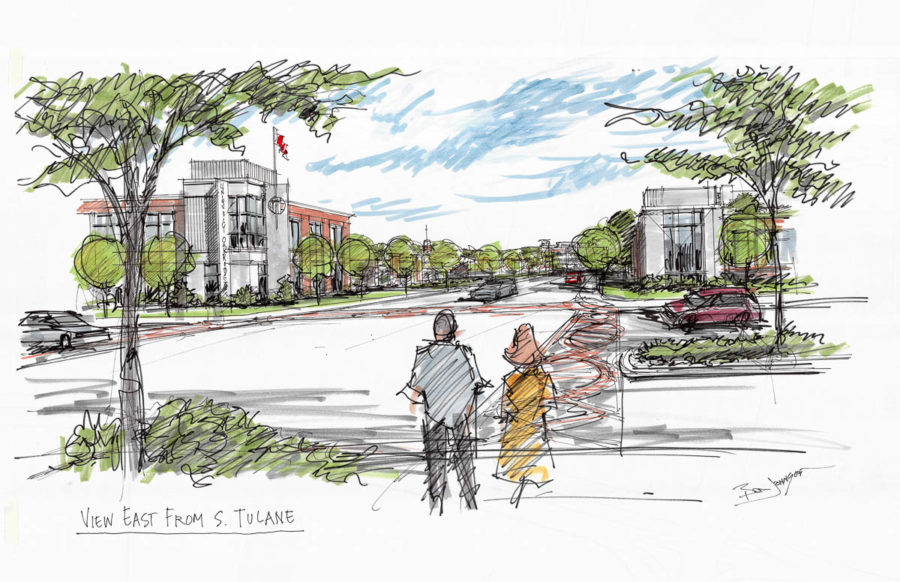 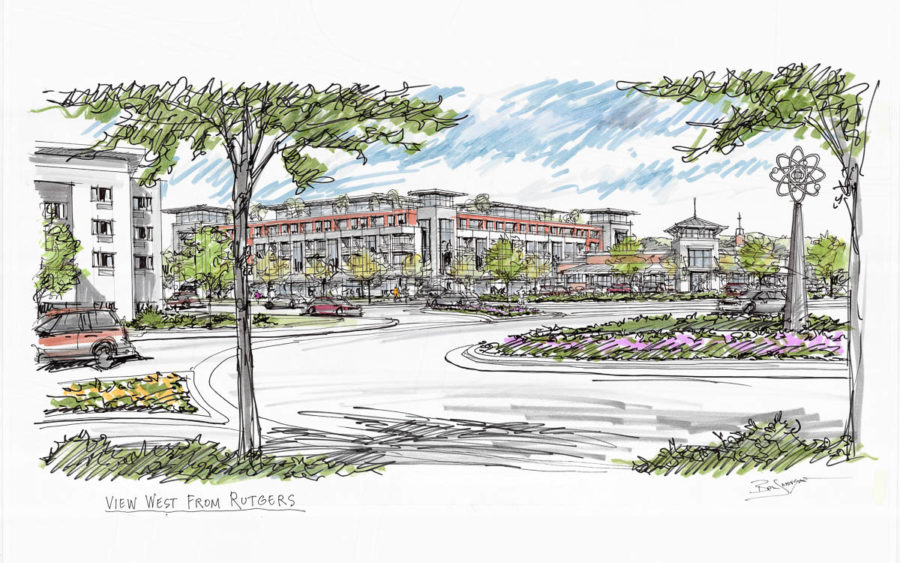 Future phases covering the next five years are hoped to bring the totals to 88 condos, 300 apartments and 30,000 sq. ft. of retail, dining, and entertainment space. Over the five year period, tax generation for the city is estimated to be over $5,000,000. It’s an ambitious project and one that most towns never have to initiate. The urban development that has been drawn to other cities in recent years would now have a place to land in Oak Ridge.

I also reached out to an old friend and colleague, Jim Dodson. A long-term Oak Ridge resident, thirty-five year teaching veteran with the Oak Ridge Schools, and current City Councilman, Jim is one of the city’s biggest cheerleaders. He said they are

excited about the possibilities of expanding the opportunities for growth in residential, small business, office space, restaurants, entertainment, and green areas included in a more walkable center city. Currently, the area around Wilson Street, Tulane, and Rutgers Ave in the city of Oak Ridge are prime areas for potential economic growth. As a compliment to many big box retailers and our American Museum of Science and Energy this new much anticipated development will finally give our residents a more centrally located downtown producing much needed property and sales tax dollars that will benefit the city and our local school system for years to come. 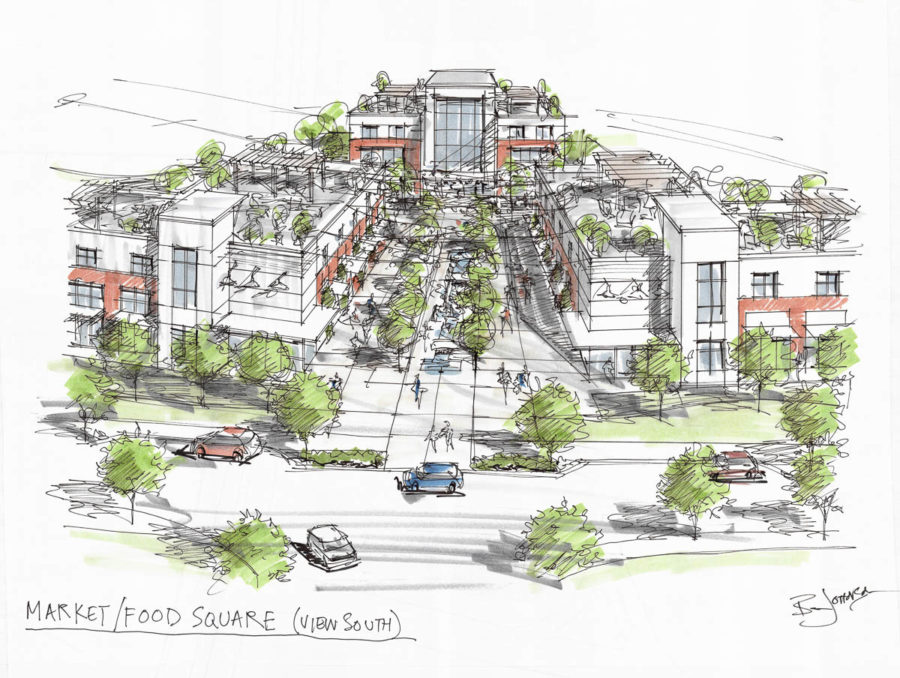 The area is adjacent to the new location of the Museum of Science and Energy, and in walking range of the Oak Ridge Mall, grocery stores and more. It might just be the missing piece that Oak Ridge has been searching for for nearly eighty years. The event will take place on the property starting at 5:00 pm today and the details regarding the RFP will be released this afternoon. Anyone interested in learning more about the RFP should request information from the Land Bank via email at landbank@oakridgetn.gov. I hope to add a link to the actual RFP when it becomes available.