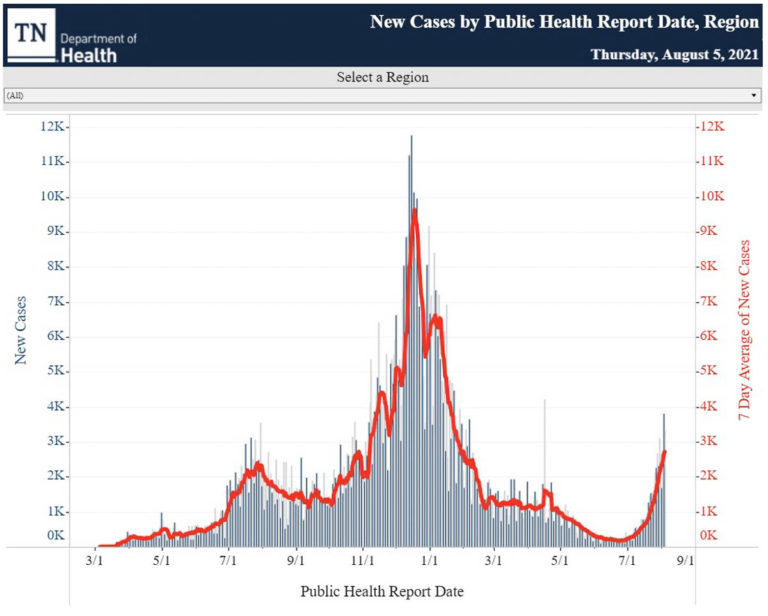 I hoped to never write another article with “COVID” in the caption. When I wrote the “final” article on May 28, the U.S. was averaging about 23,000 new cases per day and the number was dropping. We are now averaging more than four times as many, and the number is climbing. We were averaging just over 500 deaths per day and declining. Now we are nearing that number once again and deaths are rising.

Knox County was averaging 8 new cases per day and that number is now 80 per day. Starting roughly at the time of my last report, Knox County recorded one death in seven weeks. We’ve now recorded eight in the last two weeks.

Beyond that, I know we are feeling the impact more at a personal level, and I assume others are sensing the change. Last week our daughter had an appointment canceled because the professional had COVID. I got my hair cut and the barber told me he’d had a cancelation that day because a client had COVID. We know several people who are vaccinated and yet have contracted COVID in the last couple of weeks. Our daughter has returned to teaching in Oak Ridge and multiple students in her school are out with COVID or with quarantines just a week in. The City Council District One forum last night was switched to virtual at the last minute over COVID concerns.

It is all very frustrating because, unlike last time, this could have largely been avoided. We were handed a miracle and we, so far, have squandered it. Especially in southern and more conservative states where the vaccination rates are abysmal. The states with higher percentages of vaccinated residents are simply not in the same mess we’re in. With the Delta variant, it appears the magic threshold of vaccination percentages for something resembling herd immunity may be very high.

For these reasons and more, I feel compelled to resume my reports. I will return to weekly reports on Friday. The reports will be a bit different. I will give much shorter attention to international and national reporting and focus on what impacts us the most: state and local. The data is also more limited. Many countries and states are not reporting as frequently. The Knox County Health Department reports only once a week, has no press conferences, and does not report Knox County hospitalizations, but rather regional hospitalization numbers. The Knox County School system has stated their intention to not maintain a dashboard, so those numbers will largely be a mystery.

I’m also waffling on whether to allow comments here or on Facebook. I’m going to start by not allowing them on Facebook but allowing them here. I think the arguments and counter arguments about most of the topics have been covered. I’m also sensitive to the fact that misinformation is often spread in comments. I don’t know that conversation and/or arguing is going to accomplish much at this point. And honestly, monitoring and responding to all of it is exhausting. Don’t be surprised if commenting disappears on these articles in coming weeks.

Much of the world remains unvaccinated, with Africa and parts of Asia lagging the most. There are literally only three countries in the world with above 70% fully vaccinated: Iceland, United Arab Emirates, and Malta. Even that level of vaccination may not be enough to thwart currently circulating variants: Iceland has seen a greater increase in the last 14 days (185%) than the U.S. and has a higher rate of infection.

While cases are increasing nationally, they are not increasing equally across the country. Florida is contributing about 1 of every six infections. Their daily average is roughly twice that of California, even though their population is half that of the western state. The highest current rate of infection, however, belongs to Louisiana with 97 infections per 100,000 residents and a 104% increase in the last fourteen days. The five states with the highest infection rates are Louisiana, Florida, Arkansas, Mississippi, and Alabama. Not coincidentally, those states rank 47th, 23rd, 46th, 49th, and 50th in full vaccination rates.

The state of Tennessee has reported 910,185 cases of COVID-19 and 12,798 deaths. The new case average, which fell as low as 169 per day in June is now averaging 2,709 new cases per day, like late January. A year ago on the same date, the state was averaging about 1,700 per day and dropping. The state currently has the 12th worst infection rate in the country and the rate has risen by 191% in the last two weeks.

The state is averaging ten deaths a day and that number is slowly rising. The average fell as low as three less than a week ago and continues to rise. There were fifteen deaths reported yesterday.

Hospitalizations have risen dramatically. At my last report in May, nine people were hospitalized the day before and a total of 518 COVID-positive patients were in Tennessee hospitals. For a clear comparison, 97 were hospitalized yesterday and there are 1,499 currently in the hospital. Of these, 456 are in ICUs and 235 are on ventilators. Both numbers are well over twice as high as my previous report. ICU beds across the state are 92% full. Our positive test rate rose from 3.38% in my last report to 15.8% yesterday.

The most important statistic is, perhaps, our vaccination rate, as that is the only way this stops and vaccinations are no longer hard to come by, with everyone age twelve and over able to get a free shot at a range of locations. Tennessee’s vaccination rate remains very low, at 45.2% with one shot and 39.5% fully vaccinated. The state ranks 45th and 42nd in each respective category out of the fifty states.

While the state’s ranking has largely not improved, the vaccination percentage has continued to creep upward. At my last report, only 31% were fully vaccinated. Additionally, at that time, we were vaccinating over 100,000 people per week, though the rate had already dropped. It continued to drop to around half that number each seven-day period.

If there is any encouragement for us buried in the numbers, it is that the rate of vaccination is increasing once more. In the last seven days, over 90,000 shots were given in Tennessee, compared to just over 76,000 in the previous week. The number has been steadily increasing for several weeks. Unfortunately, the state needs to be vaccinating 250,000 a week to have a relatively high vaccination rate by winter. Unless the rate increases quickly, the rollercoaster will likely continue.

In state news, the director of the state vaccination program was fired after stating that teenagers could make their own decisions regarding vaccinations – which has been state law for 30 years. The state announced there would be no further vaccination outreach regarding any vaccines before walking that back several days later after a large amount of negative national press. All but a very basic portion of the emergency orders from the governor were lifted over the summer.

This action removed local autonomy over mask mandates in all but the five metro areas. Tennessee House Speaker Cameron Sexton threatened to call a special session of the legislature if any state school systems mandate masks or close due to the virus. “If we need to come into a special session and say school systems can’t mandate masks on kids, I’m happy to do that. I’m sure our members are happy to do that.”

Two children in Memphis died last weekend from COVID-19, after only nine deaths of people below 20 for the duration of the pandemic. Tennessee Health Commissioner Dr. Lisa Piercy said yesterday she expects all pediatric ICU beds to be filled in the state by the end of next week. ““Never in my career have I seen hospitals full in the summer,” she said, also noting the increase the recent increase in hospitalizations and ICU stays for younger adults.”

Just moments before this article was published, Dr. Piercy said the state will begin issue more data on pediatric hospitalizations due to the increases and has asked hospitals to submit capacity updates. She also indicated guidance would be sent to school systems regarding their reporting to the public.

The local situation is like the others. In its most recent weekly report, the Knox County Health Department reported 44,001 confirmed cases, an increase of 560 over the previous week, for an average of 80 new cases per day. They report 1,240 active cases in the county, up from 721 the previous week, for a weekly increase of 72%. At my last report, the county was averaging 8 new cases per day and had 276 active cases. Subsequently, active case numbers dropped as low as 76 in late June.

Eight people have died in Knox County in the last two weeks. Of these, one was between 18-44, four were 45-64, two were between 65-74, and one was 75 or older. This is consistent with percent of people in older age groups being vaccinated at higher rates which will, hopefully keep the fatality totals lower in this current wave than in previous waves. COVID-19 Deaths in Knox County now total 658. Knox County’s positive test rate is now 14.6%.

In related local news, a Maryville child is reported near death from COVID-19. Three days ago, East Tennessee Children’s Hospital reported four children with COVID-19 in their ICU and sounded the alarm about the increase in cases.

The Knox County School Board showed little inclination to impose a mask mandate for the coming school year. This after the Knox County Health Department (as well as the CDC and Academy of Pediatrics) recommended a mask mandate for children in schools, many of whom are not eligible for a vaccine and most of whom (even among those eligible) have not gotten one.

The biggest related news from the week came yesterday as Dr. Buchanan announced her resignation as Director of the Knox County Health Department, effective October 1. She will remain the county health officer until December 31. No reason other than “to move to the next chapter of my life,” was given. Dr. Buchanan has often been at odds with Mayor Jacobs in her response to the pandemic, but both he and Mayor Kincannon praised her work on the county’s behalf.

With Charity Menefee, the other KCHD face of the pandemic having resigned in July, a serious void has been created at the Knox County Health Department in the middle of a pandemic. Mayor Jacobs announced today that her twin positions would be replaced by two people and that a national search would be held using an outside firm.