A White Wedding in a Global Pandemic: An Urban Story 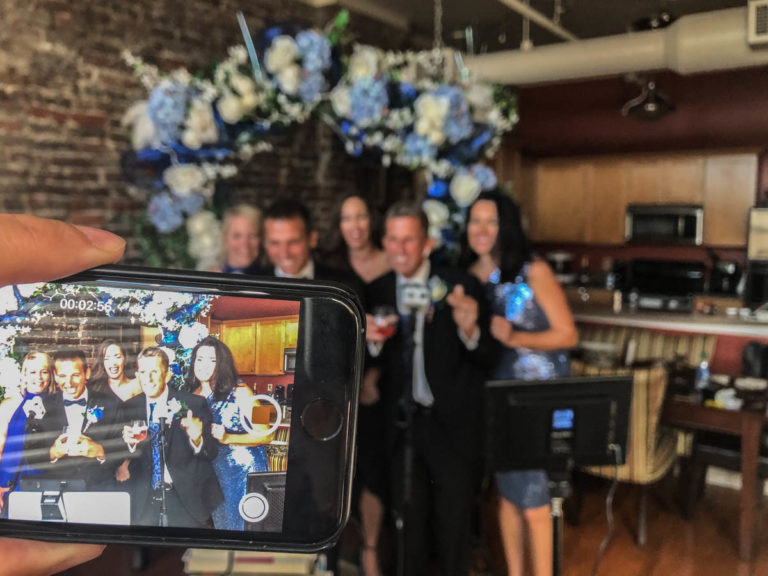 Christopher Deal and Brandon Pratt have been together for a decade and they always assumed they would get married and be together forever. That the story of their wedding would ultimately involve a global pandemic, a radio powerhouse, and Billy Idol, they could not have imagined. And yet, that is precisely how the story unfolded.

Christopher, originally from Florida, moved to the Bahamas, but mostly grew up in Palm Beach, Florida, on the east coast of the state. He got an undergraduate degree at FAU and his M.Ed. at Nova Southeastern University. He did PhD work at Nova in Miami before moving to North Carolina in 2006. He has worked as an elementary teacher, adjunct professor at Miami-Dade College and was a curriculum coordinator in North Carolina at Piedmont Community College.

The two met when they each took a trip to Florida with their ex-partners in 2011. At a bar on that trip, the two couples met, and Christopher asked Brandon to take a photograph him and his ex. The group talked and exchanged phone numbers and soon thereafter Christopher broke up with his partner and posted about it on Facebook. Brandon, who had also broken up with his partner, saw the post and reached out and the two began to talk.

They began messaging and talking over several months, before meeting in Asheville to see if the chemistry held up in person. They had a great day picking apples, hanging out outside Tupelo Honey and realized they had something. For almost year Christopher made the five-hour drive to Knoxville once each week or two, as his schedule was more flexible. It became clear that one of them needed to make a move. Brandon, who was well established in Knox County arranged for an interview for Christopher, who was hired as a fifth-grade teacher.

He joined the Leadership Academy at UT as an entrée to an Ed.S. program. As a part of that program, an internship as an assistant principal was provided, and Christopher joined administration from that point forward. He got his degree in 2017 and is now Assistant Principal at Sarah Moore Greene Elementary School. He says he has worked with Title One (a large percentage of students living below the poverty line) schools most of his career and that is where his heart is. He says he loves the east Knoxville community.

Brandon grew up in Water Valley, Mississippi, in the northern end of the state. He attended the University of Mississippi, where he obtained his undergraduate degree and began teaching at Horn Lake Elementary School, while he commuted from Memphis. He loved teaching from the beginning and still maintains contact with some of the students he taught there, who are now in their late 20s and early 30s.

His principal encouraged him to pursue an administration degree and gave him opportunities to move in that direction. He obtained a M.Ed from the University of Mississippi, driving each weekend with three others for a year-and-a-half. He had made contact with a representative from the Knox County Schools at a job fair when he was an undergraduate.

Three years later, in 2001, after obtaining his M.Ed., he reached out to the recruiter, again, and ultimately moved to Knoxville to begin teaching at Cedar Bluff, first in third grade and later in fifth. He said his grandparents had taken him to many places across the country when he was growing up, including east Tennessee and the Smoky Mountains. His parents brought him later and he decided it was a place he wanted to be.

He initially lived in a west Knoxville apartment and later a condo in the same area. He was in a mentorship program in his school and eventually became assistant principal at A.L. Lotts, then principal at Corryton, Sunnyview, Ball Camp Elementary and then Northshore Elementary. He missed working in a smaller school where he knew his students and many of his parents by name. He moved to New Hopewell Elementary as principal and describes it as “a precious school and precious community.” And he knows the names of all of his students.

He moved downtown in 2009. He’d been living in Farragut, but wanted to sell, and he bought the a condo in the Phoenix where he and Christopher live now. He says it was a great move and he loves living downtown. Christopher moved over in 2012. Christopher says it is perfect for the two of them. They are so committed to downtown that Christopher is running to be on the Downtown Knoxville Alliance Board of Directors. Christopher has always lived in cities and the two feel there is so much to offer in downtown Knoxville. Brandon loves downtown running through the city and through U.T.

Christopher told the story of how their wedding came to be, starting by pointing out that his parents have been married for almost fifty years and Brandon’s have been married over fifty years. He said when they first got together, he knew it was for good, no matter how long it was until they married. Brandon interjected, “He used to say, ‘I see no one past you.'” Christopher said their friends have been asking for years and he always said, “I’m ready, but not right now.”

Near the end of his first year at Sarah Moore Greene, he was driving to work and, as he neared Five Points, he was listening to the eighties station Sirius XM radio, which plays the music they both love. It was spring 2020 and the pandemic had become a serious issue. He heard an ad on the radio, “Enter the Billy Idol, Sirius XM Virtual White Wedding Contest.” They were looking for couples who planned to get married during the pandemic and were offering $10,000 toward the wedding to be broadcast over the network and filmed for the website. It would also include a certain 80’s artist known for, among other songs, “White Wedding.”

He entered the contest as soon as he got to work, typing in why you want this wedding in 500 characters or less. The U.S. Supreme Court was currently deciding a pivotal case on LGBTQ rights (they ruled on June 15, 2020, that workers cannot be fired for being gay or transgender). He mentioned the fact that they had been together nearly ten years.

They are also huge Billy Idol fans, having seen him in Las Vegas. They were on the third row at the House of Blues and Brandon caught a plate Billy signed and threw from the stage. A pick thrown out by Steve Stevens, Billy’s original guitar player, landed on Christopher’s foot. They have both framed, along with the tickets, in Christopher’s office. He said to himself, “The stars have aligned.”

Two weeks later he got a phone call scheduling an interview. “I hadn’t told him I entered, so I said, ‘Brandon, we need to take a walk.'” As they walked through downtown, he broke the news. Brandon replied, “So, is this a proposal?” Christopher replied, “We haven’t won, yet.” He did the interview with the Sirius XM team and Billy Idol’s team. He said he spoke from his heart. “We’ve been together for ten years. COVID has brought us closer together, and with everything happening with LGBT rights and our love of Billy Idol, when I heard it, it was meant to be.”

They gave him no timeline and he forgot about it. After two weeks passed, he assumed they didn’t win. A week later the phone rang, and they said they had a couple of additional questions and wanted a zoom meeting. The president of Sirius XM and Billy Idol’s team told him they had won. “It was life changing. I got to marry Brandon, the love of my life.” He brought Brandon onto the call and they cried.

The shock set in when they learned Sirius wanted it to happen in two weeks. They negotiated to four weeks and began an intense flurry of arrangements for flowers, getting rings and setting up a list to be contacted for the wedding to be held over Zoom in late June. Small gatherings were allowed at the time and they contracted with Aaron Thompson to use Sapphire for the ceremony.

When the time approached, Billy Idol’s team, in the wake of negative publicity over a country singer having a live concert in Nashville, expressed concern about having a group for the wedding. The ceremony was moved to their condo with only two attendants, their friends Sarah and Kay, another friend, Leah, officiating and her boyfriend making sure audio and video were working. The reception was held in Sapphire.

Sirius overnighted cameras, lighting, microphones, and more and Christopher and Brandon had to set it all up. They were nervous, but the staff at XM patiently worked them through it. In another example of how supportive they and Billy Idol’s team were, they offered to pay more than the 10,000.

Social media lighted up with great comments when the video was posted, but there were negative comments, as well, which prompted the president of the network to offer even more support. Christopher told Billy Idol they would understand if he backed out. He said, “Christopher, I want to do this for the two of you. It means more to me now, knowing what they said to you.”

At the beginning of the ceremony, with everyone on Zoom. Billy and his guitarist, Steven, performed “White Wedding” and “Dancing with Myself” at the end from Billy’s home. He added their names to the song. Alan Hunter, one of the original MTV VJs and currently hosts an 80s show on Sirius emceed from his home in California.

Guests, who were shown in Zoom boxes from their homes and were sometimes in focus on the broadcast, dressed in period appropriate attire. Some had pigtails and others had backdrops of 80s singers. Christopher spent the night at the Crown Plaza, and they saw each other moments before the ceremony. Their families joined in from their homes.

After the broadcast ended Christopher and Brandon went next door for a reception with another forty friends, which fit the limit at the time. They were as careful as possible to limit any possible exposure to the virus in the two weeks leading up to the date, and guests wore masks as much as possible.

The show has since been broadcast on Sirius XM repeatedly and friends and even people they did not know well told them they heard it. Many people in the gay community reached out and thanked them for being willing to have their wedding be so public. They think it might have even shown Knoxville in a different light to some people who may not know us well.

You can enjoy videos of both songs from the wedding below.