A Conversation with Cynthia Markert at Mauzy Broadway Studio 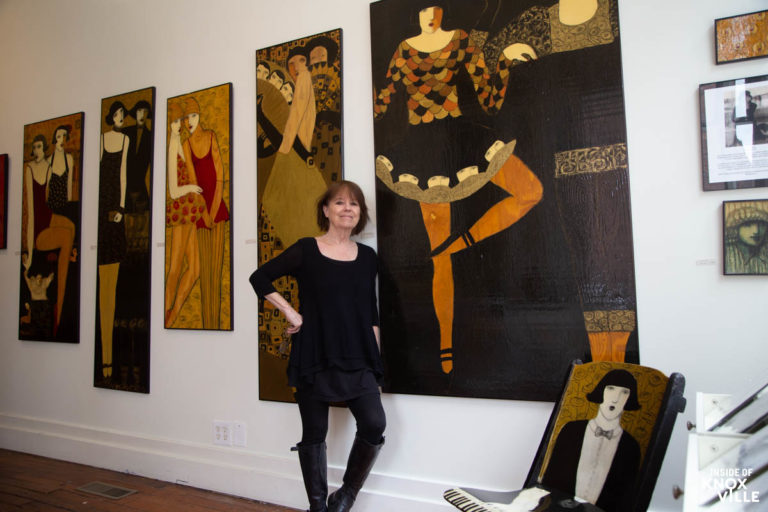 I met Cynthia Markert at her pop-up studio, Mauzy Broadway Pop-up Salon at 130 West Jackson Avenue (next to Robin Easter Design). The pop-up art gallery, featuring works by Markert and her neighbor, friend, and local artist Wendy Williams, is set to run to the end of this month. It offers a great opportunity to see works from her private collection arranged chronologically from her years at UT as a student, through today.

The name of the pop-up references an exit off I81 that Cynthia used to pass when she moved to the Washington, D.C. area in 1985. It struck her as a great name for a shop. “It became my fantasy shop in my imagination. It’s an amusing moment in my life.” And now, for only a couple more weeks (she will have to start taking down works before the end of the month), it is a shop in reality.

When I asked her to start at the beginning and tell me about her life, she said, “I took the first three years off and began being an artist at four. I would sit and draw off the television, cartoons. And then my grandmother gave me an oil painting set, it was Alhambra Road in Oak Ridge and down around behind the back of this place was a basement with one light hanging off a wire and dirt floors and I was Vincent Van Gogh down there.”

She was born and grew up in Oak Ridge after her parents had moved up from Florida for her dad to work at the plants, and says it was all art for her through Jr. High and High School. Her mother’s side (the Andersons), she said were “a little bit eccentric. Eccentricity and creativity are wonderful together. Look at Tennessee Williams and his sister, Rose. There are so many examples of the one that was able to channel it into art, and the other that tumbled.”

She said her parents were mostly encouraging. She won an award at age twelve. They went along with it, though she said they really “wanted me to take typing so I could be a secretary and get married.” In high school, she says she was drawn to fashion and that thread has continued through her work. She said other students in her high school art classes didn’t take it as seriously as she and that never wavered.

She put herself through U.T., where she obtained a degree in studio art, working at Regas Restaurant. While at U.T., she was advised that art was not practical and she took a quarter of interior design and home economics, as she says, “Long enough to get a bad grade in chemistry and economics.” As she won awards her parents accepted that she was going to be an artist.

She described the art scene at U.T. at that time as enchanting. “Across from Hess Hall were the old Victorian Houses. Now it’s an ugly parking lot. You would walk into this big Victorian house, choose a room, set up and paint. It was unbelievable, bohemian, and funky. Things have changed a lot.” She was there from 1971 to 1977.

While she’s known for working on wood, she didn’t start that until after she left UT. Another thing she’s known for is living in her beloved Maplehurst neighborhood, adjacent to UT, but she said she didn’t move there until 1981. She was going through a divorce, driving through Florida, and thinking she might move there. She determined that she couldn’t run from her troubles and drove back to Knoxville with the idea of returning to her job at Regas. She drove to the Edgewater motel and lived in various rooms there as she rebuilt herself.

She moved to Washington, D.C. for eight years and returned to Knoxville after another relationship ended. She moved into Maplehurst and found her group of people, including Andie Ray, who later would own Vagabondia on Market Square. “It was bohemian. We moved from apartment to apartment. We all were insane.”

She described a fateful wine-fueled early morning that would initiate another of her trademarks: public art. Sometime around 4:00 a.m., she said to a group of friends, “Let’s go nail one of my paintings downtown.” She and a group of friends took a large painting, along with hammers and nails, and nailed it to a wall on the corner of Wall Avenue and Gay.

“I went home, went to bed, woke up at three in the afternoon. It was raining and thought, “I kind of like that painting.” She returned with a hammer and waved at the TVA security guard as she took it down and returned it home. She said this was around 1994, but she did return to the idea, painting on plywood covering buildings. (Ed. Note: My introduction to her art, as well as that of Brian Pittman came in the early 2,000s on the wall alongside what is now Tommy Trent’s, but was then an empty building at 36 Market Square. Their art was one of the things that drew us to downtown.)

She said she never painted on buildings. She recounted one occasion in which the police arrived in a van and advised her to stop. She said they were starting to arrest artists in the mid-nineties to make a point. She returned to it by invitation in 2003 when Scott and Bernadette West had a “plywood tunnel” on Market Square and they told her to “have at it.” The work was damaged, which she said usually happened.

She pointed to the one in Strong Alley, now, which has been defaced and said, “I can’t do it anymore.” She did the ones I first remember in 2006 and later did some on the plywood during the renovation of the Oliver Hotel. One of the pieces from Wall Avenue has been made into a canvas and hangs inside the door to to the lobby for the apartments. She regrets not minding to business over the years noting that she’s lost paintings over the year as people have claimed her work, or galleries disappear along with the painting.

Her style, which is very particular, she says grew out of her time at UT and the classes she took in Women’s Studies. “I became a nineteen year old ferocious feminist.” She noted all the female subjects of male artists. She said the art texts were very male oriented. “I am forever locked in, nothing matters to me except the 1890s to the 1930s. The Belle Époque to the jazz age. The free-thinking woman, the odd woman, the new woman, and the flapper. Those are my iconic figures that always came out when history was changing and gender stereotypes were being uprooted, and the women who were coming out of this.”

She said that in her earliest paintings the figures were almost androgynous, but became more feminine as her work progressed. She said each tell a story, some with great tension. She mentioned Lynn Soloway, an assistant professor at UT who was very influential. Some of the work is about Cynthia’s mother and sister. “Some people think they are lesbian,” but they are about other aspects of female interrelations. She mentions Andie Ray showing up in her work.

“A lot of it is about women defending themselves, standing up for themselves. Some of the costume is either feeling uncomfortable in something that might have eroticism in it or wearing something that’s a shield protecting yourself from that element of life. Those are things I experienced in my twenties.”

“So many people say, ‘she just paints the same thing over and over again.'”  She recounted a story of a shop operated by Susan Key years ago, which she thinks was about where Pretentious Beer is currently located. In 1994 she hung some paintings there and overheard a man say, “These are all just the same thing.” She said she looked at his wife and it was clear she got what Cynthia was doing.

She represented all the artists from the Candy Factory in the Fine Arts Pavilion at the World’s Fair in 1982. She was working in blue and has only one painting from that period. She later worked with with dark colors and later evolved into brighter colors. She speaks of Carl Jung’s concept of a “wise voice speaking inside you.” She identifies this second self as some of the second figures in her work.

“It’s all about women bonding and how women respond.” Weddings are a theme. In her first painting on wood she was representing a bride who was being given by one man, her father, to another man, her husband. In these early paintings, “the bride would be sacrificed and didn’t know where she was, the mother had resigned to what marriage was, and the grandmother was a little bit daffy.” She says the work has always been about generational women.

She also talked about Wendy’s work who she said wasn’t doing art when she moved in next door to Cynthia in Maplehurst. She said Wendy complained about the guy on the other side playing opera all night. It was Cynthia painting, “playing John Rutter’s ‘Requiem’ all night. The two connected. “Wendy became more connected with her own creative talents.” Cynthia says she thinks their work goes well together.

She tells of near misses and possible big moments over the years for her art. In 2006 she was sought out by designers who were from Europe and the west coast of the U.S. who had style forecasters who said the next big thing would be art deco and they courted her putting her work in trade magazines. She said they thought she was going to be hot, but “at best I was lukewarm.” Her prints did land in Bed, Bath, and Beyond and Rooms to Go among other places.

Just before the pandemic she was contacted by a man who had seen her work inside Kress Emporium in Asheville. He and partners had opened the Windsor on Broadway in Asheville. The group is out of Atlanta and they own three historic structures across from the food-coop in Asheville. They intended to renovate them into boutique hotels and “fill them with my art. This has been my fantasy for the last ten years.” The plans were put on hold.

They planned to name one of the hotels after Zelda Fitzgerald, who is one of Cynthia’s obsessions. They were going to open another in the River Arts District with an art gallery. Now she doesn’t know where that stands, but it was an honor to be in the conversation.

When the pandemic hit, she went six months without selling a painting. “Then everybody went wild. Christmas, people got out and bought.” The good streak has continued with a warm response to her pop-up and a painting being hung in Marble City Salon, Melissa Hill’s new business. Melissa used to cut Andi Ray’s hair and the symmetry feels sweet.

In Knoxville her work is primarily available inside Rala at 112 West Jackson and via their online presence, Shoprala.com. The art currently for sale, including Cynthia’s and Wendy’s may be found here. She also has work in Kress Emporium in Asheville. Cynthia confesses marketing has never been her strength. To have her work online through Rala simplifies the issues of having people contact her from afar wanting to know what is available and has been a new extension in her relationship with Nanci Soloman and Rala, who she very much appreciates.

Be sure to stop into the pop-up at 130 West Jackson to see this rarely seen work and maybe chat with one of Knoxville’s artistic jewels. In the meantime, here’s a 2011 video produced by George Brock Scott about Cynthia’s work: