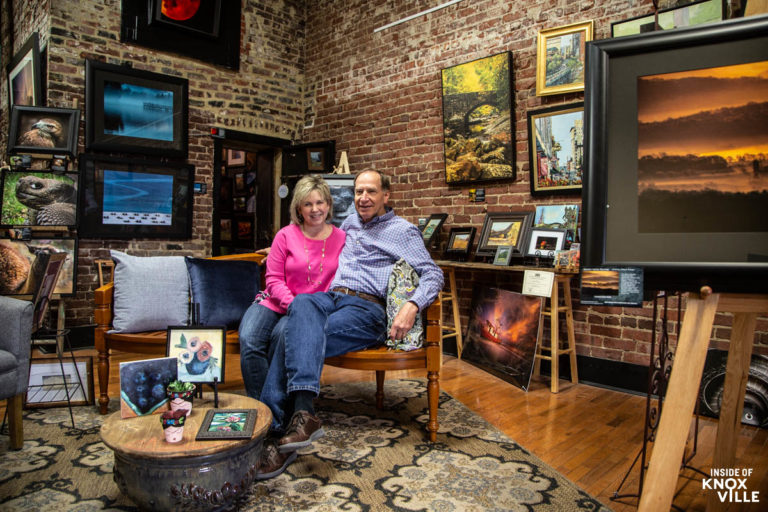 New downtown businesses have opened in a steady stream during the pandemic. In the case of Christopher Robin Arts, owned by husband and wife, photographer Chris Rohwer and oil painter Robin Rohwer, the business had operated out of the Emporium. When the space on the promenade at the back of the Phoenix Building became available, with the closure of the downtown location of Prestige Cleaners, the couple decided to open a pop-up shop just to gauge the response. The move is now permanent, and the couple has signed a two-year lease.

Chris grew up “on the prairie of Nebraska. It was all cattle and corn, but I was a city kid.” The city in question had a population of 1,800 people and is currently five hours from the nearest airport. He attended college in the Black Hills in Rapid City, South Dakota. In 1982 he took a job in Memphis, which he calls “a big mistake until I met Robin.” His degree was in business, but the job involved teaching Tai kwon Do and running the school.

The couple met in 1983 and moved to Knoxville in 1984. As Chris put it, “She wasn’t moving to South Dakota and I wasn’t staying in Memphis.” Robin said, “I chose the state and let him choose any town in the state.” Chris understood there were mountains nearby and that was enough for him.

Once in Knoxville, Chris used his business degree going to work for Third National Bank, which later became Sun Trust. He later became a commercial banker for Home Federal. He is a third-generation bankers, which makes him feel comfortable with the vault in their new space. There are actually two, though one must have once utilized a mezzanine. It is thought they were used by a jeweler.

He said he began taking photographs in high school and continued in college using the dark rooms of the era. He never loved the dark room and, after stepping away for some years as the family grew, Robin encouraged him to return to it as a hobby. “It’s another excuse for me to be outdoors and to travel.” It was 2013 when he bought his first DSL camera and he describes himself as a “landscape photographer,” saying he lacks the patience to be a wildlife photographer, though there were several beautiful wildlife photos in the gallery. He said he is getting more comfortable photographing cityscapes and people.

He retired just three weeks ago after twenty-five years at Home Federal. He said it seemed like the right time, though he misses both the company and the customers. He said the bank was a great organization to work for and he had a great career.

Robin was born and grew up in Cookeville and attended Tennessee Tech and then Memphis, becoming a pharmacist. She said they met on a blind date when she had one final year left in pharmacy school. She said they were both ready to leave Memphis. She said they raised their children here and have left the nest. She worked as a pharmacist until three years ago and since has devoted her time to painting.

She said her art really evolved in recent years. She enjoyed art as a child, but says, “It wasn’t really encouraged.” She took classes about a dozen years ago and became jealous of her friends who had more time to paint. “What I love to do is plein air paint . . . It’s a challenge to chase the light.” She typically paints landscapes or “wonky buildings,” or other objects where the light catches her eye. “It’s really a therapy.” She said it was something she just had to do.

She says they were lucky enough to get a space at the Emporium three years ago. She said since the pandemic started, she “has done nothing but eat and paint and read. I can do all three at once.” She said the foot traffic was down, though the space was great. They were familiar with the space in the Phoenix because Chris had hung one of his photographs there. When the cleaners closed, Robin was struck with the possibility.

They pitched the idea of a pop-up gallery to Ron Sherrill, owner of the location and he agreed. They were curious what business would be like several blocks down from their other location. She said walk-through traffic was fairly good, though depressed from normal. She enjoyed the energy of having people drop by. It helped her keep going.

The pop-up shop started during the holidays and was intended for two months. They extended for two months. Robin said her “CFO said we can’t continue to pay two rents.” Chris added that CFO meant “Chief Framing Officer.” Chris added, “We didn’t really expect to move down here permanently, but it has worked out. The main thing for us is sharing our work and if the sales come that’s all the better.” Robin adds, “If we can touch somebody with our art, that is such a blessing. If they spend money, it means it touched them.”

“That said,” Robin added with a laugh, “It’s really starting to stack up, so if you need a six-pack of paintings . . . It’s almost like Christmas decorations, you just rotate them.” She wants to paint larger, but more people are looking for smaller works.

She said their early work may not have been ready to be sold and it is also hard to let go of it at first, but eventually the volume of pieces suggests that some of it should be released.” Chris said they showed in competitions and did well and that suggested that people might like it. The space at the Emporium made selling their work the next logical move.

While Robin thrives on interactions with others, Chris enjoys solitude, which was in great supply for photographing during the pandemic. He pointed to a beautiful photograph taken from House Mountain where he said he walked up to photograph the sunrise, but it was not great. About 10 am, with the sun rising, it hit a cloud and “filtered all the light out except this beautiful golden glow across the entire valley.”

Robin says she feels like people are emerging from the “darkness of COVID” and she is enjoying the foot traffic at the new location. Chris said they miss the interaction with the other artists, so it’s a trade-off. He said it was a great experience and First Fridays were great. In the current location, you must find them. Come in through the entrance to Phoenix Pharmacy and follow the hallway. They are working on signage.

Robin pointed out that a number of people who have visited the new gallery are from out of town and out of state. “Last month, it was Chicago and Wisconsin.” Chris added there are “a lot of Charlotte people,” as well. They said there are also a lot of people moving in who drift into the space. They also mentioned parents of UT students who often compliment our downtown area.

The two feel they complement each other and feel that will translate into a good business relationship. They added that Ron Sherril has been very supportive, and the residents of the building have, as well. Chris said he worked in downtown 30 years ago and there was very little happening, which is quite a contrast with today.

You can find Chris and Robin and their work on Instagram, Facebook, and their website. Or stop in and welcome them to downtown. You might leave with some great art. For now, they do not have specific hours, but “generally try to be there Wednesday through Saturday afternoons from about 1-6 p.m.” They encourage people to email or message to confirm they are in the studio or “we may be off creating new work.” Contact Chris at crohwer922gmail.com or 865-216-7386 and Robin at RRohwer922@gmail.com or 865-216-5841.