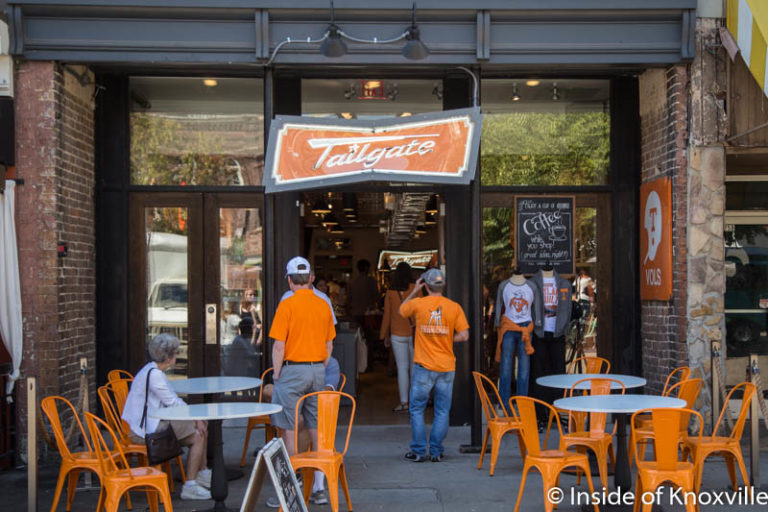 On March 21st, Tailgate on Market Square closed its doors for good. The store opened in October 2016 and seemed perfectly suited to fill a niche for UT-related sportswear in the downtown market. The location was only the third for the small chain in which American Eagle held majority ownership. And, according to former General Manager Michael Galyean, it did go well.

Michael said that he felt the success of the downtown location was due to its local ties. He was given freedom to integrate local connections in the merchandise they sold, even being allowed to offer designs early in the store’s tenure. The store succeeded immediately.

He’d moved to Knoxville in 2000 to study at UT and, prior to his involvement with the store had little connection to downtown. He quickly learned, he said, the relational nature of downtown residents and merchants and felt completely supported by both. He also was surprised to learn how much of a tourist destination downtown Knoxville had become.

He said the store was intended to have a hometown feel and he was delighted to reconnect with UT. He had been a tour guide at UT as a student, so he felt a strong connection. One advantage this store had over some of the others became obvious immediately, and that was the constant foot traffic. Whereas other locations were situated close to campus and lived and died with campus comings and goings, the Knoxville store was steady.

Gameday weekends were great and he said they really started Thursday night and ran through the weekend. But the store was also aided conferences, festivals, student orientation and family visitations to the university. Their retro designs and throw-back logos appealed to parents and grandparents who remembered when those designs were new. That said, tourists were often confused by “Vols” and often asked what a “vole” was.

Michael said that every year was better than the one before and they enjoyed experimenting with new ways to drive sales. They offered pop-up shops on game day weekend at places like Calhoun’s and other near-campus locations. Response was good.

When the first wave of COVID-19 shutdowns happened, they posted a sign that said, “We’ll be back April 1.” They didn’t return until mid-May and it was with strict guidance from their corporate headquarters that masks would be required. This was well before the local mandate.

Incredibly, he said sales continued to go well, with some months better than pre-COVID months. Families came with new students and stayed longer since there were fewer orientation opportunities on campus. The VOL Shop closed for months and that likely drove some business in their direction.

Michael has opted to take the severance and is looking for a position to continue his relationship with downtown. He said he would likely have been given a job in a mall and would have been more restricted in how he operated from that position. He said he would find it very difficult to return to a mall after working downtown. “I learned you are not your job. I’m looking elsewhere because I want to continue to be part of the fabric of downtown.”