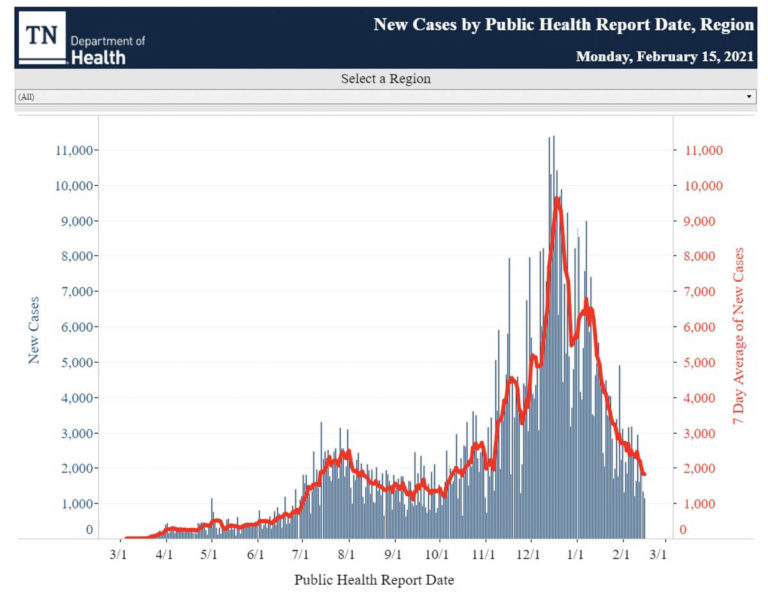 Today is Mardi Gras. It takes me back to last year, having one last blast in the streets with tens of thousands of people, including Urban Girl and Urban Woman. It was a scenario that would become unimaginable just a few weeks later. I’m remembering the great Mardi Gras 2016 with Urban Brother (here and here). We planned to return, but that would be our lone shot together as adults.

I often think back to days off from school for the people’s party in the streets. I’m remembering scrambling for candy as a kid, always under the watchful eyes of my parents, while brass bands, massive floats and wild crowds streamed by. I miss Mardi Gras, just as we all miss our great traditions. We will be back. For today, it’s Mardi Gras in my heart.

Hospitalizations also continue to trend sharply downward, with only ten people with the virus admitted to hospitals across the state yesterday. 18,027 Tennesseans have been hospitalized with the virus since the beginning of the pandemic. 1,095 COVID-positive Tennesseans are currently hospitalized, less than 1/3 the number just six weeks ago. 317 are in the ICU, while 175 are on ventilators.

Deaths across the state have fallen dramatically over the last eleven days, with the average falling from 135 per day on February 5, to the current 53 per day. The new average is the lowest seven-day average since December 5 (52).

The state reported just 4 deaths yesterday, a number that would have been good for Knox County alone just a month ago. The last time the state reported a number this low was September 7. Sadly, the improvement comes after 10,937 Tennesseans have died of the virus. There will likely be worse than this one ahead, but the wave of death we experienced in December and January seems to have ended.

Testing continues at an exceptionally low level relative to pre-holiday levels, with the state reporting just 11,332 tests yesterday. It is hard to argue the number is woefully short of optimal, however, because the positive test rate is a relatively good 7.85% and has continued to drop dramatically. Johns Hopkins University pegs the seven-day average for the state at 9.4%. These rates aren’t quite where we’d like to be, but with 20%+ rates in the rearview, it looks pretty good.

The state-wide vaccination program seems to take two steps forward and then a step in the wrong direction. The state reports 1,026,918 total shots have been given, but only 3,011 were given the day of the report. We need ten times that number every day for several months to get out of this in a timely manner. For the last week, the state is reporting 158,296 shots were given.

The Knox County Health Department reported 134 additional cases of COVID-19 today, bringing the county totals to 39,065 confirmed cases and 6,424 probable cases. 42,924 cases are considered inactive, while 2,032 Knox County residents have an active case of the virus.

Two additional deaths were reported in the county, bringing the county total to 517. It defies logic that there would be four virus-related deaths in the state yesterday and two of them would be in Knox County. The reporting systems used by each are likely not aligned. One of the county residents who died was between the ages of 45 and 64, while the other was 75 or older.

The state reports that Knox County’s positive test rate has averaged 17% over the last seven days.

Updated vaccination numbers were released by the county today and indicate that 70,570 total vaccinations have been given here. 47,626 county residents have gotten one shot, while another 22,845 have gotten both shots. 10.13% of the county has at least one shot.

Dr. Buchanan began by commenting on the current investigation of lost vaccinations, saying she asked for an investigation to get the facts, which she assumes will confirm there was no malicious intent. She said she has seen that internal changes were made to ensure it doesn’t happen again.

She said the plan calls for moving to the next phases of vaccination as they have more vaccines. She said they would also move to the next categories if the state moved the counties around us to the next stage in order to avoid confusion. She said the state has a new website which will help locate vaccine providers near you and there are more now.

Active case numbers reported by the Knox County Schools continue to drop, with the system reporting 142 active cases yesterday afternoon, down from 172 reported on Friday. Of the 142, 105 are students and 37 are staff members. 3,088 are considered recovered, while 1,649 are currently in quarantine or isolation.

Metrics remain unchanged from yesterday, with teacher and custodial staff metrics rated yellow, substitute availability rated red and the others are rated green. Only one school remains on virtual instruction, and that ends today:

The University of Tennessee is reporting 88 active cases, up five from the day before. The number includes 68 students and 15 employees. 2,782 students and staff are listed as recovered, while 9 new cases were reported yesterday. Isolations and quarantines took a jump yesterday, from 279 to 334.

Of the 334 under quarantine or in isolation, 82 are staff members, 183 are residential students, and 69 are non-residential. No additional clusters were reported. The most recent saliva testing drew a 64% participation rate, even though the university says the testing is mandatory. From these recent tests, twelve new cases were identified. 207 tests were performed by the Student Health Center last week, resulting in 20 positive tests.