Inside of Mobile Mardi Gras 2020 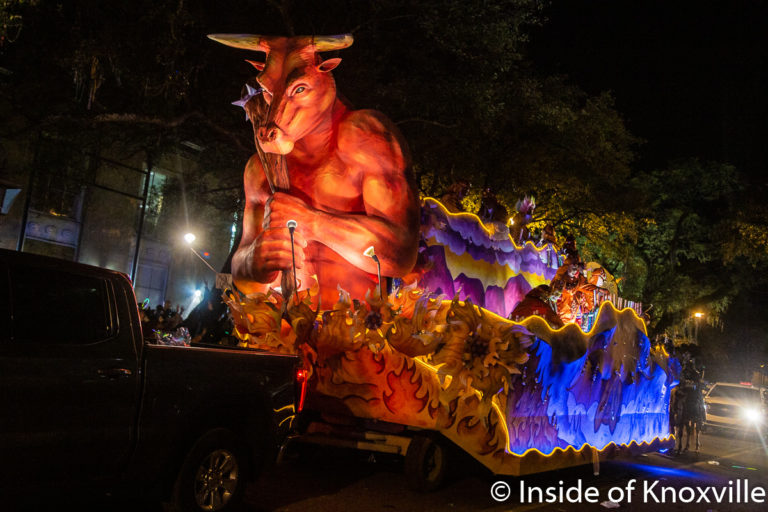 Happy Mardi Gras, y’all! I’m slow getting this one out as I recover from a wonderful three days in my hometown for the oldest Mardi Gras on the continent (1703 for those keeping score at home), or as we like to say, the original Mardi Gras. Urban Girl got her first Mardi Gras when Urban Woman and I took her down on Friday for all the weekend parades, which are the parades I remember most from my youth.

Urban Brother and I went to Mardi Gras several years ago, fully expecting it to be less than we remembered. It had been decades since we had gone, and we were certain we’d inflated in our minds how amazing the floats were, how excited the crowds, and how much great fun we’d had. We were wrong. It was everything we’d remembered. Nothing we’d seen since had diminished the experience.

Here’s how Eugene Walter put it in one of my all time favorite books,

“But, after all, if, as a child, you saw, every Mardi Gras, the figure of Folly chasing Death around the broken column of Life, beating him on the back with a Fool’s Scepter from which dangled two gilded pig bladders; or the figure of Columbus dancing drunkenly on top of a huge revolving globe of the world; or Revelry dancing on an enormous upturned wine glass -wouldn’t you see the world in different terms, too?”

— Mobile writer Eugene Walter, quoted in Katherine Clark’s “Milking the Moon: A Southerner’s Story of Life on This Planet.”

With Urban Brother’s death last December, I feel more of a weight of family history and culture. There is no one else but me now to pass it on to Urban Girl and Urban boy. It’s a heavy feeling to know that those with much better memories for details than myself are gone and my memories are all that’s left of that time. So, it was out of school for Urban Girl and off we went.

Area parades and balls start at the end of January and gather intensity and frequency through February, culminating on Fat Tuesday, Mardi Gras Day – today. It’s the last big blow out before Lent: sin big today, repent big tomorrow. Various forms of debauchery are celebrated and enjoyed before the advent of that somber season. When I was young, schools were out Monday and Tuesday of Mardi Gras week. Now they are out all week. Mobile is serious about some Mardi Gras.

We arrived at our downtown hotel in time to make it to Friday’s Crewe of Columbus and Krewe de Secondline. The floats in parades aren’t always beautiful, sometimes simply serving as a large platform for throwing beads, candy, stuffed animals, and more, but the Columbus parade features some of the most beautiful floats.

Urban Girl loved it and couldn’t believe that the pounds of throws we took back to our room were just the beginning of our five-parade run. I took long walks on Saturday morning and Sunday morning because the people watching is some of the best I’ve ever encountered. Inhibitions are allowed to slide just a bit and the more outrageous the attire, the better. While strolling, I took in some of the beautiful homes and ironwork, and had chance encounters with Joe Cain’s mistresses and Mardi Gras Indians.

Saturday afternoon we enjoyed the Floral Parade, which is mostly ridden by children and features some of the prettiest, though smaller, floats. The night parade featured the Mystics of Time, probably the very best parade of all, for sheer beauty, inventiveness, and clever themes. The self-propelled, enormous smoke-breathing dragons are an amazing sight and delight the crowd while terrifying small children.

On Sunday morning I walked to Church Street Cemetery and gathered with hundreds anticipating the advent of the mourning widows as they gather at Joe Cain’s grave. Joe is widely acknowledged as reviving Mobile’s Mardi Gras after the Civil War by gathering some of his friends to dress as Indians and proceed down Government Street (the site of today’s parades) making a ruckus. After that, Mardi Gras in Mobile was back on.

We gathered ourselves for one final push in the afternoon with the Joe Cain Parade, which is led by “Chief Slackabamarinico,” the name Joe Cain assumed for his original parade. The chief rides in a wagon, just as Joe Cain did, and what follows is a rag-tag version of group chaos. Known as the “people’s parade,” it is one of the craziest and most fun. The focus here is not on floats, but on widows, mistresses, Indians, skeletons, bums (the Society of Bums, or S.O.B.s), and the Mystic Squirrels of Bienville, or Mystic S.O.B.s

The day ended with the motorcade of King Elexis I and the Le Krewe de Bienville parade, named in honor of the founder of Mobile, Jean-Baptiste Le Moyne de Bienville. That ended our time in Mobile as Urban Girl needs to learn a little math and science to go with her culture, so we drove home on Monday.

If you want a crazy, fun Mardi Gras experience (and you should!), consider a trip to Mobile next year. Plan your room well ahead if you want to stay downtown (the best plan by far). And when you get there, laissez les bon temps rouler. As you might expect, this is a small fraction of the photographs I took. I narrowed the 549 down to the best 312 and I’ll post those on the Inside of Knoxville Facebook Page a little later, so go there and check that out.