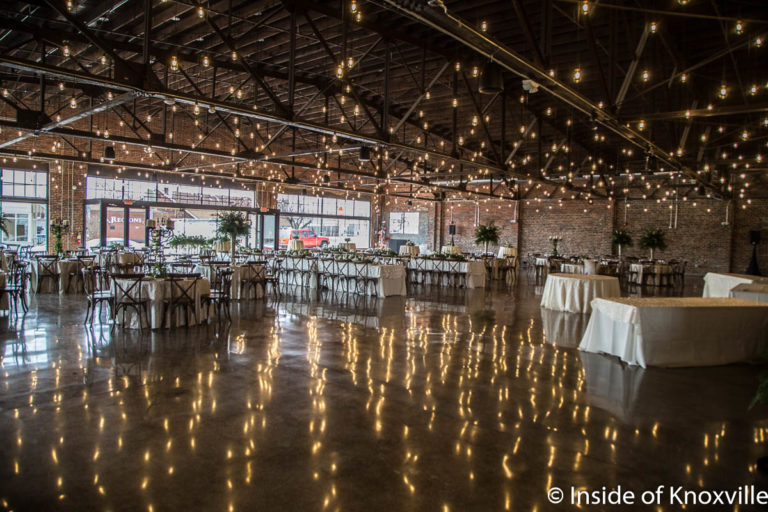 An additional award is given to an individual. The Felicia Award (named for Felicia Harris Hoehne) is given for great service to the community in the area of beautification. This year’s recipient was Dwight Van de Vate, Director of Knox County Community Development, whose efforts included replacing lost labor from the state designated for litter pickup with teams to do that in Knox County. One large site mentioned was a tire dump dating back to the 1960s with over 45,000 tires that were removed.

The Mary Lou Horner Beautification Award, given to a previous winner who has continued to maintain or has subsequently enhanced their property, was awarded to the Miller Building on Gay Street. The former department store has gone from an empty building to use as offices, a bank, home to KUB, and, more recently, has shifted to include commercial businesses such as Cruze Farm Ice Cream and the Bliss/Tori Mason department store.

The category of New Architecture is judged based on overall design, aesthetics, form and proportion, appropriate use of material, magnitude of visual impact on the area, and social and economic benefit to the community. The ten nominees included three in the downtown area: The Crozier on Central, the University of Tennessee Student Union, and the Volunteer Boulevard Parking Garage. Two awards were given, recognizing both the Student Union Building and the Crozier.

The category of Redesign/Reuse is judged based on overall design and aesthetics, sensitive treatment of existing materials and special architectural features, magnitude of visual impact on the area, and contextuality appropriate in its surroundings. Twelve of the nineteen nominations were for projects in or near downtown, including 822 Sevier Avenue, the Commerce Building, Elst Brewing, Embassy Suites, First Presbyterian Church, Knox High Senior Independent Living, Kybra Athletics, Maple Hall and the Parlor, Market Square Restrooms, the Daniel, the Mill and Mine, and the Press Room (where this event was held). Two winners were recognized and both are from downtown: The Press Room and Embassy Suites.

Public Art included three nominations and the winner came, once again, from downtown as Cassiopiea, the mural on the western side of Market Square, was given the nod. In the category of Restaurant/Cafe/Bar/Brewery, aesthetics, an inviting facade, context, visual impact, and usefulness to the community are considered. Eight nominations included Bluhen Botanicals Wellness Center, Central Filling Station, Elst Brewing, Fin Two, Maple Hall and the Parlor, and the Oak Room by Abridged in the downtown area. The winner was the Oak Room.

Outdoor spaces are judged based on their aesthetics, creative use of the space, visual impact, and availability to the public. Six of the seven nominees were downtown or near downtown, including the Augusta Quarry at Fort Dickerson Park, Jackson Avenue Redevelopment, the Randy Tyree Performance Lawn at the World’s Fair Park, Suttree Landing Pavilion and Kayak Launch, the Volunteer Boulevard renovation, and Waterfront Drive. The Award went to the Augusta Quarry at Fort Dickerson Park.

The award for best Community Space is awarded for design, creativity, visual impact, and whether the project supports community building and a sense of civic pride. Of the five nominees, two were near downtown: the Birdhouse porch restoration and the Saint John’s Prayer Garden. The Birdhouse porch restoration was one of the two nominees recognized.

The award for Environmental Stewardship included two nominees, with the Shelton Group representing downtown. The award went out of downtown to the KUB Engineering Building.

Downtown continues to be impressive in its growth, not only in quantity but, as recognized by these awards, in quality as well. Congratulations to all the nominees and winners.