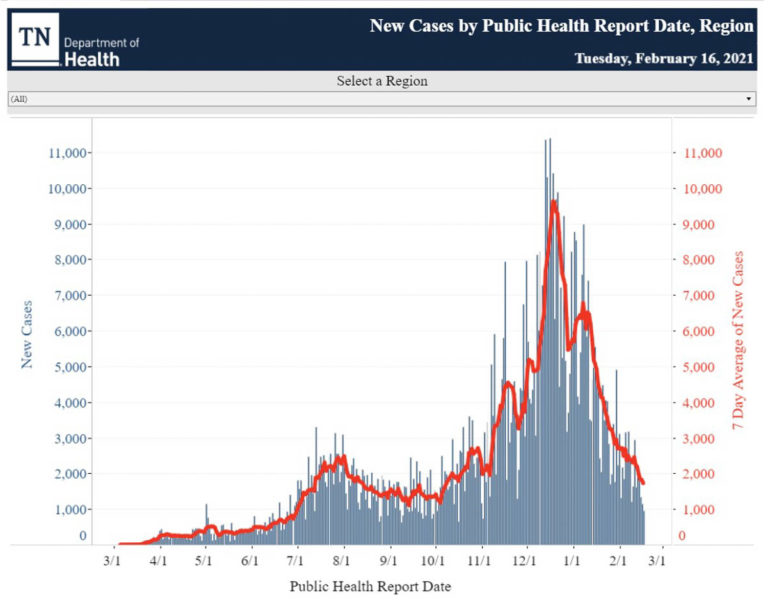 It’s time for me to come clean. We’ve had snow all around us for weeks, but it was seeing my relative’s wintery photographs from Alabama (!) that convinced me you had to know I bought a sled just after Christmas. I’m convinced it’s the reason we haven’t gotten any of the significant snow our neighbors have enjoyed. If I had simply waited and then scrounged for cardboard boxes like I should have, we’d have gotten great, fluffy snow. It is too late for this year, but I promise to do better next year, saving cardboard boxes just in case.

An additional 36 COVID-positive Tennesseans were admitted to the hospital yesterday, bringing the pandemic total to 18,063. While hospitalizations remain at levels of about one third those of a few weeks ago, the recent precipitous decline has at least paused. The number of COVID-positive Tennesseans currently in the hospital rose by 31 to 1,123. While small, the increase is one of only three days since January 6 and is the largest single-day increase in the last six weeks. ICU patient counts went up by one to 317, while ventilated patient numbers dropped by five to 170.

Testing, for the most part has settled at about 20% of the levels from before the holidays. While that means current case numbers are in some ways not comparable (we would more cases if we tested at the same level), current case numbers cannot be dismissed because all other numbers are also dropping. Importantly for testing, this includes positive test rates, which the state put at 8.87% yesterday. Johns Hopkins University puts the state average for the last seven days at 9%, or similar to our rate in early November.

The state reports 1,036,123 total shots have been given of the vaccine, with 5,692 given the day of the report. For the last seven days, the state is reporting 140,190 shots were given, a drop of about 18,000 from the previous seven-day rolling period. 10.09% of state residents have been given at least one shot, while 334,247 state residents have gotten both vaccines. At our current rate, the state could be completely vaccinated 630 days from today, or by November 9, 2022.

The Health Department did not issue numbers today, issuing the following statement:

Due to an identified data entry issue found during routine analysis, KCHD will not be updating case numbers or benchmarks on Feb. 17. Case numbers for Feb. 17 and benchmarks will be updated on Feb. 18 when the issue is resolved.

In other local news, club XYZ has surrendered its beer permit for twenty days and agreed to pay a $2,000 fine for violating the Board of Health 10 pm (when the violations occurred) closure mandate.

Also, this afternoon will mark the first meeting of the newly formed Knox County Committee on Health and Economic Well Being, which was formed out of some county commissioners’ displeasure with the Knox County Board of Health. It is unclear what function the new committee will play regarding the current pandemic. A full list of members and their resumes may be found here.

The Knox County Schools are reporting 121 active cases of COVID-19, the lowest number reported by the system since the beginning of the second semester and the lowest since November 17 (111). The current number includes 90 students and 31 staff members.

2,163 students and staff are reported to have recovered from the virus, while 1,350 are currently in quarantine or isolation. The quarantine/isolation number is the lowest reported by the school system since January 11 (1,049). The number includes 1,219 students and 131 staff members.

The current metrics for the school system include green ratings for student attendance, cafeteria staff and bus service. Teacher attendance and custodial support are each yellow, while substitute availability remains red. All schools are offering in-person instruction.

The University of Tennessee is reporting 79 active cases of COVID-19, including 58 students and 21 staff members. The number, which peaked this semester at 108 on February 1, has slowly dropped since. The university reports 2,797 recoveries and six new cases.

Isolation numbers dropped by 15 the previous day, to 319. The number has remained steady in the low 200s to low 300s for most of the semester. The current total includes 63 staff members, 175 residential students and 81 non-residential students. The shift since last semester is that more of the cases are occurring on campus than off.

A new cluster has been reported at the Kappa Kappa Gamma sorority. The cluster was identified on February 15. To date, all clusters this semester, except for one off-campus, have been at sorority houses. Dr. Plowman has explained the previous clusters as a factor of the communal living quarters which, apparently, force more contact than do the fraternity houses.