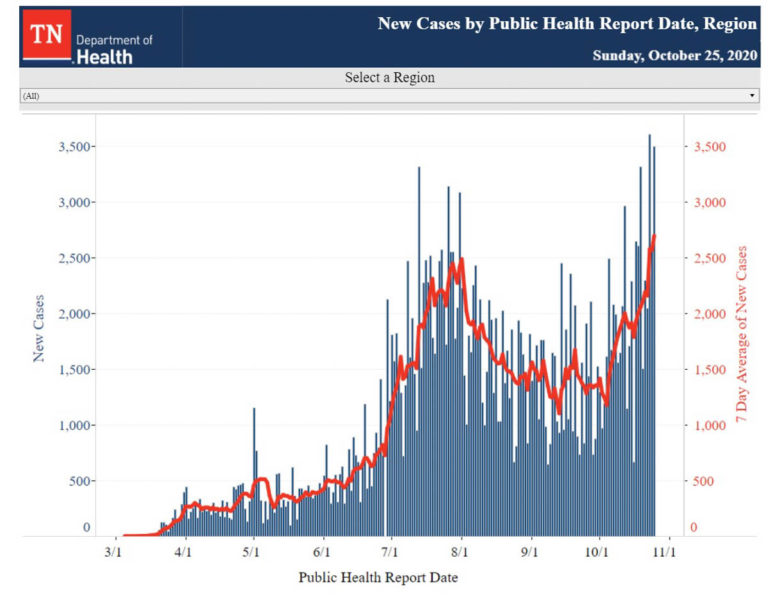 I hope you found some time to enjoy yourself this weekend. I introduced the Urban Kids to “Groundhog Day” at the encouragement of a reader. They liked it, though the five-year-old questioned why Bill Murry and the lady “wrestled” with each other. Oops. We enjoyed some college football, outside visits with family and generally just chillin’. I hope you did to.

Thank you to everyone for the words of support after the article I wrote on Saturday. For the many of you who expressed kind wishes for the health of my friend or asked how he was doing, I can report he seems better. He has gotten the plasma treatment and he is taking remdesivir. He has an infection in his lungs and is getting oxygen, though he’s not on a ventilator. He’s hopeful he’ll be able to come home tomorrow after taking the last of the remdsivir.

The news outside our doors was not so good. Let’s take a look.

About 43.4 million people around the world have been diagnosed with COVID-19 in the roughly seven months since the beginning of the pandemic. Of these, roughly 1,160,000 people have died and about 31,900,000 people have recovered. About 10.3 million remain ill. The number of active cases is roughly 1.2 million higher than it was the same day last week. Over the course of the last week, about 2,996,000 additional people have been diagnosed and about 40.6 thousand people have died. Both numbers are larger than the previous week.

Yesterday, 406.4 thousand people were diagnosed with the illness, compared to 324.8 thousand a week earlier on the same day. Roughly 4,500 deaths from the illness were reported yesterday, up from about 3,900 a week earlier on the same day. Whereas the previous week had included the first day ever with over 400,000 cases reported in a single day, the week just concluded the week just concluded presented five days with over 400,000 new cases. Three days broke the previous day’s records, with the highest day of the week including 490,802 new cases.

The daily average number of new cases has risen dramatically over the last week across much of the northern hemisphere. The current seven-day average yields about 428,000 new cases per day. A week ago that number was 360,700 per day. After a long period of relative stability, deaths are also increasing. The seven-day average for deaths across the world is currently 5,793 deaths each day. A week ago, it was 5,276. The current average is the highest it has been in over two months.

The countries reporting the five highest death totals yesterday is the same as last week, with the exception Brazil, which dropped to sixth and Argentina, which took its place: India (463), the U.S. (442), Mexico (431), Iran (296) and Argentina (283). This report comes from Sunday, typically the lowest reporting day for most countries. Each of these countries are averaging much higher numbers per day.

The spread also continues to be very wide, with 46 different countries reporting at least 1,000 new cases yesterday. This number has also increased each week and was 41 last week. Of the 46, Europe leads with 19 countries, Asia adds 14, South America has six and Africa has four. The shift to the northern hemisphere is clear when contrasted with a few weeks ago when South America had the most countries in the group.

With Europe’s case numbers returning to and in some cases surpassing last spring’s numbers, new rounds of restrictions and lock downs are spreading across the continent. Spain and Italy are instituting restrictions aimed at avoiding total lockdowns. Bars, restaurants and gyms in Italy have been limited. Even as leaders express fears of a dire winter, 2,000 protesters gathered in Berlin to express opposition to restrictions. Molotov cocktails were thrown at the Robert Koch Institute, which tracks German infections.

In China, bars are packed, masks are coming off, theaters are open, live music has returned and the country’s economy is rebounding. Here’s a recent article detailing how they regained control of the virus after the initial outbreak. In addition to a massive, strict national lockdown, the country’s response to small outbreaks is revelatory. There is a current outbreak in Kashgar, in which 137 assymptomatic cases were found — the first in the country in 10 days — and in response, authorities plan to test 2.8 million people.

Just over 8,890,000 Americans have been diagnosed with COVID-19, an increase of about 483,000 over the course of the last week. About 5,573,000 have recovered and just under 2.9 million remain ill, the highest number of active cases at any time since the beginning of the pandemic. 230,512 people in the country have died of the illness, including 5,730 in the last week. Cases are increasing rapidly, while deaths have now begun an increase, as well.

The U.S. continues to lead the world in total and daily cases and in total deaths. New cases are now averaging just under 69,000 per day, an increase from just under 58,000 per day a week ago. Friday’s total of 81,417 new cases set a pandemic record for a single day. Saturday’s total of 79,453 is the second highest total of the pandemic. The U.S. remains 8th in the world in per capita cases (excluding countries with fewer than 1,000,000 in population) and 8th in deaths per capita.

Deaths in the U.S., which experienced over a month of relatively stable numbers, has now begun to increase. The current average for daily deaths in the U.S. is 818 per day, up from 725 a week earlier. The 1,224 deaths reported on Wednesday was the largest daily total since August 26. States now leading in deaths reflect the states which saw significant case numbers a month to six weeks ago. Yesterday’s highest death totals were Missouri (95), Texas (40), Tennessee (31), Massachusetts (25), and Illinois (24).

The increase in cases is both deep and wide, as I have stated in other articles, recently. The precipitous incline of cases can be illustrated by the number of states reporting multiple thousands and at least one thousand. Last week on the same day, I reported five states with multiple thousands of new cases for the day and sixteen with at least 1,000. This week those numbers are nine states with multiple thousands and half of all states — 25 — reporting at least 1,000 new cases. The top states reporting yesterday: Illinois (4,062), Wisconsin (3,626), Tennessee (3,500), Texas (3,387), Missouri (2,703), California (2,681), Florida (2,385), Ohio (2,301), and India (2,153). While eight southern states were over 1,000, the mid-western states, with the exceptions of Texas, Tennessee, and Florida, have begun to dominate the top of the list.

Politics is dominating most news reporting, but the virus refuses to leave the headlines even in that arena. On Thursday night in the nationally televised debates, the contrast between the two candidates was highlighted with President Trump stating that we’ve turned a corner and the virus is “going away,” while Vice President Biden warned of a “dark winter.” Also, while the previous week saw Kamala Harris campaign aides test positive, this week, five of Vice President Pence’s aides, including his chief of staff have tested positive. Dr. Fauci, meanwhile, said that if Americans are not going to wear masks voluntarily, it should be mandated.

For the weekend (Friday through Sunday), the state of Tennessee reported a total of 9,680 new cases. Last weekend the number was just over 5,900 cases for the same period. On Friday, the number was 3,606 new cases, a new pandemic record for the state. Yesterday’s 3,500 is the second highest of the pandemic. Prior to these two day, the record of 3,317 was set last Monday. Of the three days the number has crossed 3,000, three were in July and three were in the last seven days. The current seven-day average for cases is 2,692 per day.

As noted above, the number of cases reported for Tennessee yesterday was the third highest among the states for the day. The state has now reported 234,320 confirmed cases and 13,327 probable cases. The state ranks eighth in total cases among the states, 21st in total deaths and 11th in total tests. In per capita comparisons, the state ranks 7th in cases, 27th in deaths and 10th in testing.

The state set a new record for single-day deaths on Friday with 63. It broke the record set October 8. On Saturday reported deaths totaled 24, with 31 on Sunday. Deaths in the state are now averaging 32 for the last seven days. Death totals now sit at 3,131 for the duration of the pandemic.

If there is a sliver of good news, it is that hospitalizations declined over the weekend. A portion of that (119) is likely due to deaths, but the decline was greater than the number of deaths. 15 Tennesseans were hospitalized with the virus yesterday, bringing the pandemic hospitalization total to 9,941 in the state. Current hospitalization numbers are 1,098 hospitalized, 344 in ICUs and 156 on ventilators. The numbers one week earlier were 1,188, 371 and 171 respectively.

As long-term readers would be able to guess, test numbers increased over the weekend. For Friday through yesterday, testing totals were roughly 42K, 26K, and 42K. For yesterday, the state reported an 8.63% positive test rate. Johns Hopkins reports the seven-day positive test average as 9.3%, near the highest it has ever reported for the state and the highest percentage since April.

For the three days since the last report, the Knox County Health Department reported 191 new cases on Saturday, 122 on Sunday and 155 today. Saturday’s number was the third highest of the pandemic and the highest since September 15. There are now 12,670 confirmed cases and 608 probable cases.

11,710 people have recovered in the county and 1,417 remain ill. The number of active cases is the highest it has been since the second adjustment of how active cases were determined. Sunday’s reported number of 77 COVID-positive Knox County residents in the hospital is the highest reported since the beginning of the pandemic. The number dropped to 76 today and the cumulative number hospitalized at any point is now at 455.

Two deaths were reported over the last three days, with one person between 64 and 75 and the other over 75. COVID-19 deaths for the county now total 101. According to the state website, Knox County’s positive test rate has averaged 8.4% for the last seven days.

In other news, tonight the Knox County Commission will discuss the possibility of forcing the Board of Health to hold public forums at every meeting and whether to form a separate health advisory board. The Board of Health has its regularly scheduled meeting on Wednesday.

The University of Tennessee is reporting 54 active cases of COVID-19, including 47 students and 7 employees. The number reflects a drop of three since Friday. Twelve additional cases were reported over the last two days. 278 students and staff are quarantined or in isolation, including 31 staff, 83 students on campus and 164 off campus. No additional clusters have been identified in the last two weeks.

For the first time (in my memory), teacher attendance has moved to a “yellow” or caution rating, while both custodial staff availability and substitute availability were changed from yellow to red over the weekend.