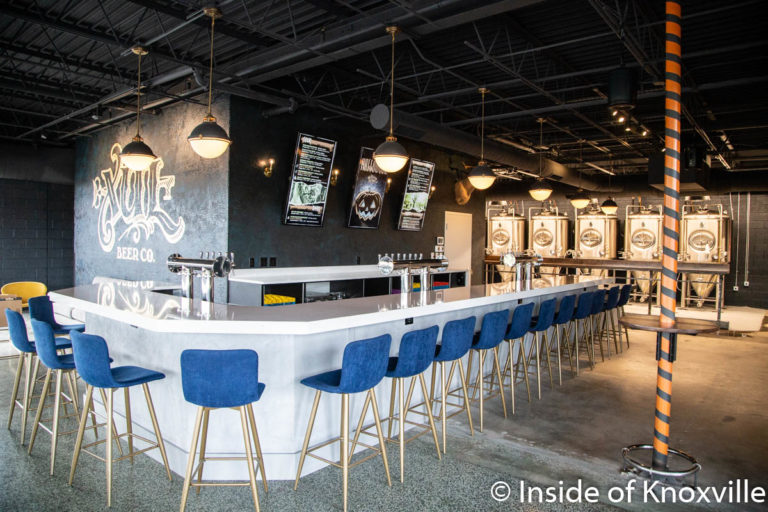 Brad West, Bently Blackshear and Tara Thacker are ready to start offering their labor of many months. After well over a year of making plans, struggling through obstacles, including a pandemic, they are making beer and are anxious for you to give it a try. Xül is located at 213 East Fifth Avenue and will offer a soft opening this weekend, beginning Friday.

Brad is from nearby Vonore and got his degree from UT in International Business and Supply Chain. He’s been working in logistics in the beer industry for several years and after another investment in a brewery, decided he wanted his own thing. That’s when he met Bently.

Bently is from Nashville and comes from an entrepreneurial family. He started homebrewing in college at UT where he received a degree in entrepreneurship. He continued experimenting after college and got a job in sales with a regional brewery, but he always had in mind starting his own brewery. He will be the primary brewer for Xül.

Tara is from Anderson County. She studied Communications. After college she worked in retail management as a store manager, district manager and in the home office for large regional companies. Her most recent job was as operations manager supporting 100 stores. She’ll manage front-of-house operations for the new company.

When the three met at a beer festival, they began tasting beers, making beer and exploring possibilities. They learned that their tastes were similar, and their goals and visions aligned. By February of 2019, the group was all in. They quickly found a location they loved when they spotted a “For Lease” sign in the big windows in the front of the former VW dealership owned by AC Carmichael.

They quickly signed a lease, and they say the relationship with their landlord has been great. They ordered engineering and environmental evaluations for the site, confirming it was suitable for their purposes. They loved the mid-mod feel of the building and the massive semi-circular bay of windows. They incorporated the look into their new design and style.

It took a year to take care of the studies and get financing lined up. The loan was approved in December and construction was set to begin in March. Due to the pandemic, the highly specialized equipment was delayed due to supply chain issues. One of the workers became ill. Once construction was finally able to begin, it went rapidly, starting around mid-May and finished by mid-September with the major work. In the end, they had transformed the 6,700 square feet into a brewery with a brand-new brewing system, a new HVAC, sprinklers, electrical and plumbing.

The group is looking to brew the kinds of beer they’ve seen people get excited about and they expect their beers to evolve over time. They have “hazy IPAs” which they describe as “aromatic and flavorful, but not bitter. They have a sours and stouts and say they’ve had a lot of fun infusing different flavors, like German chocolate, cobbler, tiki. Bently said, “There is a lot of territory to explore.” They’ll also have lagers and pilsner and “beer flavored beer just for hanging out.”

The group has secured top line equipment, including a 10-barrel brewhouse and a massive mash tun, which will allow for “brewing high gravity beers with ease.” They have 100 barrels fermentation space, which is equivalent to 200 1/2-barrel kegs. Bently says he can’t wait until the opening work is done so that he can start having fun with the setup which, he said, is better than he’d ever dreamed he’d have.

While they will offer their beer at a few key accounts around town, most will be directed to their taps or sold in 16 oz, four-can packs, canned by their partner Iron Heart Canning. They are also developing a barrel aging program that Bently is excited about.

They are aware they are opening in a pandemic, so until that is over, they will not approach their nearly 160-person capacity. “We want to be as successful as possible but protect the city and do the right thing. We can’t put our dream on hold forever. We were far along and believe in this so much that we never considered quitting.”

They will have a range of seating from bar seating to table tops to seating along the windows and comfy seating. composed of soft chairs and a couch with a coffee table, in small groupings. They want it to be a place for date night, as well as friends going out for a fun beer experience.

They’ve given a lot of attention to detail, none of which is more notable than their 22 taps tied to temperatures perfect for different types of beer. “Our draft system consists of 22 flow-control taps spread across 3 under-counter coolers, with each cooler set at a different temperature. This means those crispy bois, fruited sours, & other beer-flavored beer will be served at a chilly 38 degrees while our bombed out hazies will be at served at a perfect 44 degrees.” Stouts will be served at a “proper 52 degrees.”

They’ve installed a beautiful, clean line, quartz bar and say they drew inspiration from their favorite beer bar in Brooklyn, Tørst. They paid a lot of attention to the mood, environment, and architecture they thought would also be a hit in Knoxville. But it is all intended to be fun, from the digital menu boards, to the movie posters and the goat head with the pink goatee. Eugenia Almeida with A New Hue did a number of interior touches, including the gold-leafed logo on the wall.

For their food program, they will start with a rotating list of food trucks but have plans to purchase their own food truck which will sell New York style pizza and will operate right outside the door. They are hoping to have that in place by December and will have other small food items, as well. There will be some outside seating very soon.

The name is also part of the fun. It’s a bit of a mystery at first — how do you even pronounce it? (Pro tip: it rhymes with tool). The meaning can be traced to a computer game and ancient Sumerian culture – take your pick. It is defined in the urban dictionary as cool in a bad way or bad in a cool way.

You can find them at all the usual places: Facebook, Instagram, and their website. They have a great selection of merch, some of which you’ll find here.