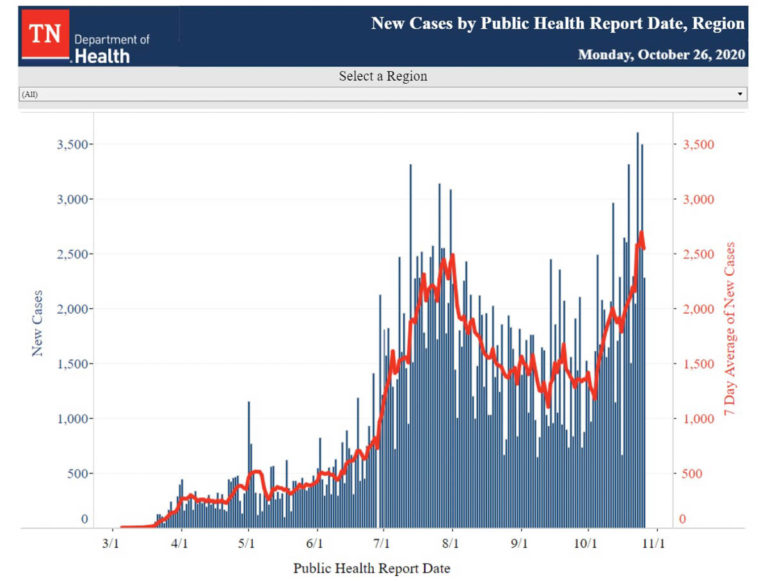 Good Tuesday! I hope you are can get outside and enjoy a bit of this gorgeous day. They will soon be in shorter supply. Many of you are getting out and voting and good on you!

Whereas Knox County voters started off a bit slowly at the in-person early voting locations, that has now reversed. Through yesterday, 109,381 people have voted in person, or a bit over 8,100 more than the same date in 2016. 5,315 absentee ballots were received in the last election and this year, 15,591 had been received as of yesterday. 14,970 people voted yesterday, which is higher than any single day in the last cycle. I have been tracking the Love Kitchen and 6,994 people voted there as of yesterday compared to 4,363 total last year. They will likely double the previous number.

YOU ONLY HAVE THROUGH THURSDAY TO EARLY VOTE!!!

Tennessee also reported 32 additional deaths, bringing the pandemic total to 3,163. The seven-day average for death is currently 35 per day, up from 22 a week ago. For yesterday, Tennessee ranked behind only California and Texas for the most deaths.

An additional 44 COVID-positive Tennesseans were admitted to hospitals across the state, bringing the pandemic total to 9,985 currently hospitalized in the state. I’m hard-pressed at this time to be confident in the hospitalization numbers, which appeared to have dropped (I reported 1098 hospitalized yesterday, but now the state has revised that number upward to 1,319 – a massive difference.), but now may not have.

The best current number provided is 1,223 hospitalized, 368 in ICU and 159 on ventilators, all of which is worse than what was being reported yesterday. Hopefully data collection will settle back to a steadier flow.

The Knox County Health Department is reporting 103 new cases for the day, bringing pandemic totals to 12,723 confirmed cases and 616 probable cases. 11,713 cases have be moved to inactive and 1,525 remain active.

The number of active cases is the highest it has been since the beginning of the month when the method of calculations changed. It is up over 100 from yesterday and up about 60% from the first of the month.

456 people have been hospitalized since the beginning of the pandemic and 67 COVID-positive Knox County residents are currently hospitalized – down 9 from yesterday. There were no additional deaths reported today and that total remains at 101.

The state website is reporting that Knox County testing is resulting in a seven-day average 8.5% positive test rate.

In news overnight, the Knox County Commission did vote to form a somewhat parallel board to the Board of Health and to require them to have a public forum at each meeting. They did not dissolve the board as a vocal group has demanded and one person had to be removed from the meeting after shouting “The pandemic does not exist!” Public comment was initially cut off at two hours but was extended after protests. Likely the best coverage you’ll read of the meeting is on the Compass website.

Dr. Buchanan began by expressing gratitude for those attempting to safely celebrate Halloween. She encouraged to only trick or treat in family groups and to give candy out in bags from a table, while you sit a safe distance away. Halloween masks are not a substitute for cloth coverings. She confirmed the above numbers.

She took a moment to express sympathy to the families who have lost someone and said that the work the Health Department does every day is to prevent more families from feeling the same pain.

The University of Tennessee is reporting 63 active cases, including 53 students and 10 employees. The number increased from 54 the day before. 1,680 students and staff have recovered, and 12 new cases were reported yesterday. The school is reporting 288 in quarantine or isolation, an increase of 20 from the previous day. Of these, 36 are employees, 88 are on-campus students and 164 are off-campus students. No clusters have been identified in the last two weeks.

As systematic testing has continued across campus, more students are being funneled into the Student Health Center for testing. The most recent numbers reported by week were 42,62,104, 125 and 156. The most recent positive test result rate was around 8%.

The Knox County School System is reporting 64 active cases, including 39 students and 25 staff. The number is down 13 from yesterday and five from a week ago the same day. 489 have recovered and 676 are in quarantine or isolation. This number includes 582 students and 94 staff, and the total is up from 612 yesterday.

The metrics used to determine whether schools remain open improved overnight. Teacher attendance was yellow and is now green. Custodial support was red and it is now yellow. Substitute availability remains red. All schools are currently open for in-person learning.