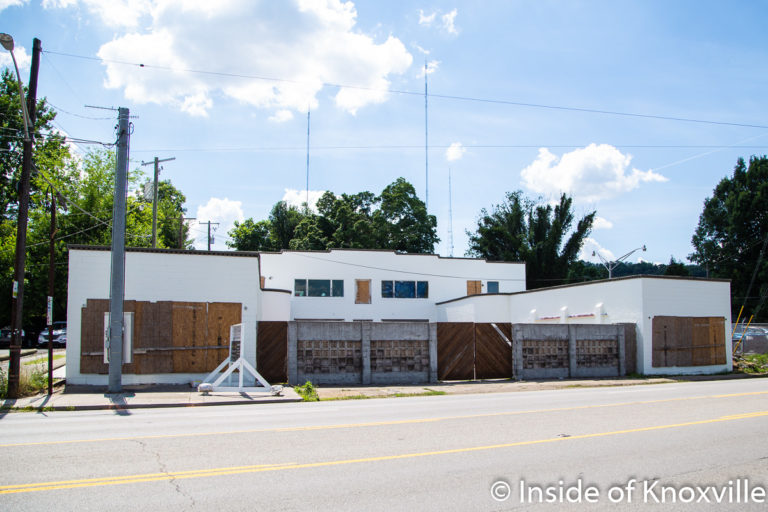 In writing about the 3415 North Broadway development, I’m venturing further afield than any posts in the past. I did write about the Broadway Development Plan about three-and-a-half years ago, but I’ve generally considered the intersection of Hall of Fame with Broadway to be the northern tip of what I cover. But then I got a chance to explore this particular property.

Those of you who have occasion to drive up and down North Broadway will probably know the property sitting Broadway directly across from the beautiful Fairmont Boulevard. It’s a stark white building with a gated courtyard on the front. The wall and the gates are solid, obscuring any view of what’s inside. It’s always made me curious. What’s behind those courtyard walls? Why are they there at all?

Developer Joe Fox of Fox and Fogarty offered to give me a tour and I decided to venture just a little north of my normal range, thinking that some of you are probably curious about this place, same as me. It has to be one of the most unique buildings I’ve ever toured. They are offering the units as condos for purchase starting at 217,000.

The history of the building is a bit sketchy, but Joe’s best information says it was built in the mid 1930s. He said it is a unique “art moderne” construction which is not typically found in Knoxville. An outgrowth of Art Deco, curved walls are a typical feature. He understands it functioned as a library at one time, but for the bulk of its history, it was an appliance store.

As for the mysterious courtyard, it’s unclear why it was closed in, but the enclosure wasn’t original. For the years the building was an appliance store, the courtyard was open and was simply a parking lot which happened to be enclosed on three sides by the U-shaped building, which features curved walls extending into the courtyard and curved windows on the front of the building.

The wall and gates were added, Joe thinks, within the last twenty years. The stamped concrete walls were fabricated by UT students. Current city codes will require a less opaque frontage to the property. The gates will be replaced, likely by iron gates, provided views in and out.

The building was purchased over a decade ago by Jay McNabb with the intention of developing it as apartments. Two units were finished and leased. They were occupied with Joe approached Jay and asked if he would entertain selling the building to allow for its development. In the the end, Jay joined the development team, as he had valuable information about the building and offered value to the team.

There will be parking for residents, but it will not be in the front. The back has a parking lot which will soon be paved, providing a space to each resident and several guest spaces. The front will remain a courtyard, but it will be upgraded with a central walkway to the building and side walkways to the front units. A fire pit, a community grill and astroturf will be added to make the area both attractive and enjoyable for residents.

Some of the units on the back side are below grade and light has been provided, as well as a small patio, by adding light wells and placing sliding glass doors to the rear of the units. It’s one of the thoughtful touches added to the design by Sanders Pace Architecture. Other original touches will remain, including wood floors on the upper level and polished cement floors elsewhere. Interior windows, allowing more light into the homes will remain, as well as original transom doorways. Use of a historic preservation grant required maintaining historical touches throughout.

Every unit will have an exterior space in the form of either a balcony or patio. Beyond that, each one is unique. Some have interior windows and others have curved exterior windows. Some have dedicated laundry rooms, while other have space for stackable units in the bathroom or, in one case, the bedroom closet. Each space dictated different layouts, but all emphasize living/entertaining space, with solid wood, soft close cabinetry and quartz counter tops.

The eight ground units are one bedroom, one bath, while the two upstairs units are three bedrooms and two baths. The size of each unit was dictated by the contours of the building and they vary accordingly. The smallest is 676 square feet and the one bedroom units, mostly in the 800+ square foot range, top out at 905 square feet. The larger two units are each over 1700 square feet.

The patios for each unit measure a spacious 16X6. All exterior glass will be replaced with high quality, custom Pella windows with to screen out exterior noise. The upstairs units will have French doors leading to their balconies. Some units have double vanities and others have multiple closets. Storage space has been emphasized. 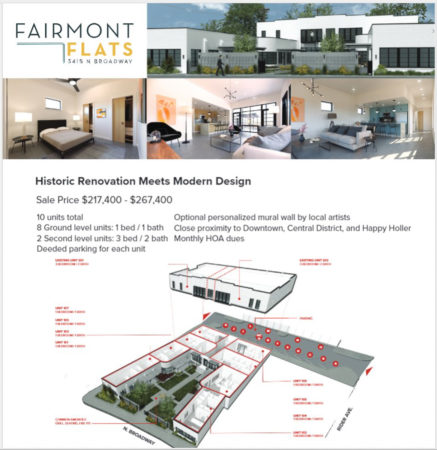 One unusual feature included in the price of the condos is an option for a personalized mural by a local artist to be added to an interior wall of the home owner’s choice. The development team has partnered with Dogwood Arts to include the option for all units. High-end finishes throughout include black stainless appliances.

Two units are spoken for, but eight remain on the market. The first homes will be available this month and the others will be completed and available through the months of August and September. If you are interested in learning more about the available units, contact Carolina Coppinger by email at Fairmontflats@foxandfogarty.com or call (865) 280-0717 (cell phone) or (865) 588-3232 (office).