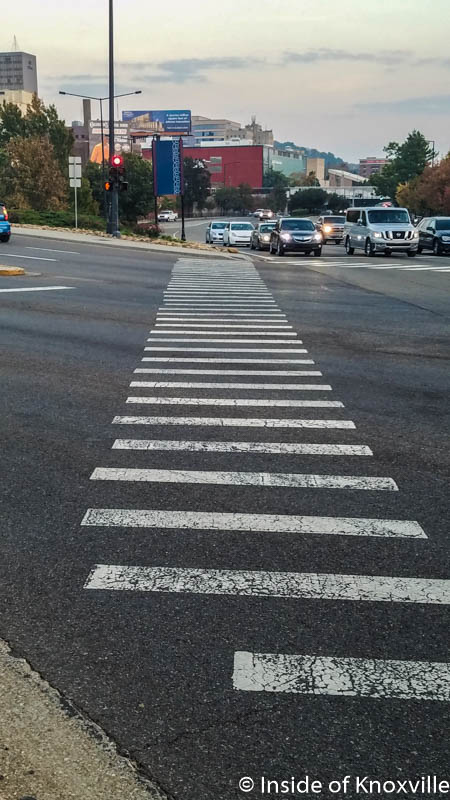 I stretched a little out of my normal coverage zone to attend the meeting to discuss the recommendations of Broadway Corridor Task Force meeting at St. James Episcopal Church on Broadway. I normally cover Broadway up to the spot where it is joined by Hall of Fame. The focus of this meeting was the stretch that starts there and goes north to Branson. Since it impacts many of my readers, particularly in Old North and Fourth and Gill, I decided to look in on the meeting and, making note of those plans, point out some of my concerns about Broadway closer in.

It’s a short, but messy and complicated stretch. The task force described it as “unfriendly to pedestrians,” with too many and too wide curb cuts, a busy road, “multiple vacant and derelict properties,” and inconsistent “codes, zoning requirements and enforcement.” The stretch includes liquor stores, check cashing stores, rent-to-own stores, title loan stores and more of that ilk. On the up side, it contains a creek that could be brought back and enhanced, some good building stock and an active retail population.

The task force is simply imagining what could be, at this point, though with the backing of the mayor. A number of city and county officials were present and the plans were developed by the East Tennessee Community Design Center. Among other things, they suggested building a town center around the Broadway Shopping Center. They’d like to include things like a farmer’s market or a business incubator, encourage mixed use development and add a district marker. Essentially, “making place.”

Structurally, they’d like to see medians, a realignment of Cecil Ave and improvements to McCrosky, improved bus stops and a bus hub to be located at the new town center. They’d like to see First Creek emphasized and improved, new neighborhood entries serving to separate residential neighborhoods from the commercial development on Broadway and a better connection for the greenway through the area.

These are all hopes and suggestions. No funding has been allocated. The thinking seems to be that if people are excited about the ideas, maybe some of them might be pursued a bit at a time, some with private funding, some with public and some with a blend. The state DOT among others will have to be on board for major changes to happen.

The mayor pointed out that a number of businesses along the strip have joined the effort by improving their properties. That would explain the recent erection of a large metal fence running much of the length of the Broadway Shopping Center. I’m not sure it’s what the task force had in mind, but, to my eyes, it seems out of place and more than a little over-the-top for the area. No doubt expensive, it does show the area businesses may be ready to upgrade their properties and area of the city.

Closer to downtown, I’m concerned about several spots along Broadway. Some of the answers to my concerns may be in the works. I wrote a year ago about a road diet for the stretch of Broadway from Central Street to Jackson. As far as I know that will come to fruition in conjunction with the planned replacement of the Broadway viaduct which is (currently) scheduled for next year.

I’ll take my concerns starting from the north, moving toward downtown. The first is the so called “mission district,” under and around I-40. It scares me – and not for my safety, but for that of the people I could easily run over in my car. Often, one of the dozens or sometimes much more than a hundred, it seems, unpredictably walks into traffic. Whether drug addled, mentally and psychologically impaired or belligerent – and I think I’ve seen all of the above – doesn’t really matter. The risk is still the same.

There are other issues, as well. Police and medical providers are almost always on the scene when my wife drives that path to work each day. It’s rare that the right-hand lane going north is available due to police cars, ambulances and other vehicles. Public health is a concern. A walk through the area reveals piles of garbage and the smells of human waste. Public urination and fights are common sights in the area. Not only are these safety concerns, they are also the view offered to guests when entering our city via one of our main approaches. It doesn’t seem like the face we want to present.

When I took the photographs you see here, I heard someone behind me say, “Fair warning.” I turned to see a couple sitting on the sidewalk, leaning against a building. The man was muscular and shirtless. He repeated, “Fair warning.” I asked him what he meant. Was he saying I shouldn’t take photographs? He said I could from a distance (I was). He said, “Things can happen.”

It became clear that this wasn’t a warning meant to protect me, but rather a threat. He stood. I walked away and he pursued me. I turned to face him and he told me he needed money to buy food. It didn’t seem like a request. Rather than lose my camera, or worse, I gave him five dollars. He said he wanted twenty. I walked back to my car and he let me go.

It is not my intent to be devoid of compassion, but pretending this is not an issue doesn’t seem a very compassionate alternative. I don’t know the solution, but surely we can do better. At the very least, a less intensely trafficked arterial road needs to be found for these folks to spend their day. I realize the issue is very complicated, but ceding a part of the city to this kind of situation isn’t the answer. Obviously, the best solution would involve providing homes to everyone, but we don’t seem to be very successful on that front.

Moving closer to downtown, I’m concerned about the pedestrian traffic crossing Broadway to reach Balter. The roads come together there in an odd way and there are no painted crosswalks or crossing lights on Broadway. Given that the business is frequented in the dark – especially starting next week when time changes, it seems like an accident waiting to happen. Perhaps this will be improved with the Jackson Avenue streetscape project or the road diet for Broadway, though that project stops just short of Balter, but neither of those will happen soon.

Finally, the intersection of Broadway/Henley and Summit Hill/Western needs a serious look. Foot and bike traffic has increased dramatically through the intersection. Students from the L&N Stem School often look like the frightened school children they are as they scurry across. More downtown residents and visitors than ever are crossing Summit Hill headed north due, again, to Balter.

The problems include speed, the strange configuration of lights for Western Avenue traffic turning left onto Broadway (which often leaves drivers frustrated and confused) and a turn-only lane coming from Western onto Henley which is often disregarded to go straight onto Summit Hill. Additionally, both northbound traffic on Henley and southbound traffic on Broadway have right turn cut-throughs that they take at high speed. While the cross walk over each is brief, both pedestrian and vehicle visibility is extremely limited for the speeds involved.

Of perhaps greatest concern, the pedestrian crossings at the intersection involve five or six lanes in every direction and, to make matters worse, the roads cut angles, meaning the crosswalks are not right angles and, thus are even longer than six lanes would ordinarily necessitate. With traffic potentially coming from numerous directions and rarely seeming aware that turning vehicles must yield to pedestrians, it is treacherous to cross. As more and more people do so, the likelihood of a tragedy increases.