“The Man Who Lives Here is Loony,” Explores Psychological Depths with Jazzy Wordplay 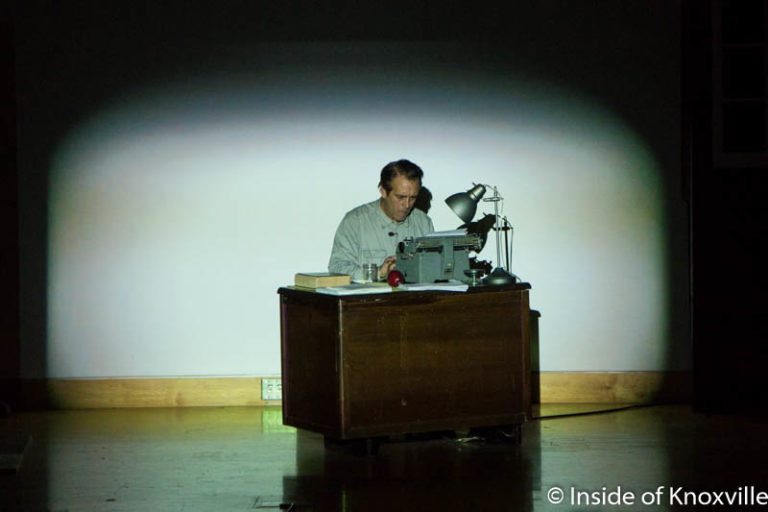 Joe Casterline in R.B. Morris' One Man Play, "The Man Who Lives Here is Loony," Knoxville Museum of Art, October 2016 It’s the kind of artistic encounter that inspires extended rumination and conversation. It rolls around inside your head for days, shifts shapes and turns again, rearing its head at unexpected moments. A quote comes to mind. A gesture. I settled in with Rusty Odom of Blank Newspaper to discuss, “The Man Who lives Here is Loony.” The thoughts below are mine. And his. And ours. The conversation played back and forth like the jazzy sounds of the words to the play, ideas springing from ideas. Recognition and resonance.

Experiencing “The Man Who Lives Here is Loony,” may vary wildly depending on what the viewer brings to the experience. Those of us who know R.B. Morris, the writer and producer of the play, will hear echos throughout of the artist with whom we are so familiar. Those familiar with the work of James Agee will recognize numerous passages from his work . . .  And from R.B.’s – or were the R.B. lyrics Agee references in the first place?

For those familiar with each, the play can be viewed through a prism of inter-connected references and cross references. Does Agee resemble R.B. because R.B. wrote the play? Has the R.B. we know and love been so shaped by the work and life of James Agee that we recognize the former in the latter? Does Joe Casterline’s performance reference R.B. Morris as much as Agee? The answers are likely, “yes,” to all of the above.

But what of those who come fresh to the experience, void of knowledge of either R.B. Morris or James Agee? It may be for those audience members that the impact of the play may be felt with full force. The words are like a jazz riff, leaving wonder in their wake that anyone can remember that many lines, sometimes shot like machine gun bursts, always with that rhythm, that cool, cool rhythm. Without the rhythm, the words would fall flat and Joe Casterline nailed every single line, stanza and extended solo.

The play opens with The Man – who is never explicitly identified as James Agee, though he is referenced briefly as “Jim” – discovering someone has written, “The Man Who Lives Here is Loony,” on the door to his New York City apartment. A projected image of fluttering frames from a sixteen millimeter reel establishes the era and echos Agee’s work both as a screenwriter (“African Queen”) and as a film critic. Taylor Coker, well known local jazz bassist, provides riffs and runs throughout that never intrude, but always augment both the era and the sound of the words riding over the wave of his notes.

Rusty noted that this play would fit nicely in the context of the Big Ears Festival with its explorations, experimentation and genre-blurring. It isn’t so much a biographical exploration as it is a psychological journey. In the first minutes, within the confines of his Brooklyn apartment where the entire play will take place, the man reacts to the writing on the door and establishes the terrain the play will explore:

Agee’s internal and existential struggles with the topics of art, journalism, film, religion and spirituality are front and center. In a particularly moving passage he discusses genre and the false lines between them as he sorts his writing into stacks on the stage:

“The best writing might easily transcend any category or terminology . . . Wasn’t Homer poetry and history? Mythology and truth? What is it? Fiction? Fiction, which can be closer to the truth than history or journalism! Yes! Language should follow the shape of reality. The shape of the story. The shape of the voice. Prose that would turn into poetry when prose demands poetic expression. Language flowing continuously, mind, body and nerves!”

Other elements of the Agee biography are apparent, though enveloped in runs of words, leaps of thought and an explosion of sometimes mutually exclusive concepts: A great mind struggling with the religious orthodoxy he learned at an Episcopal boarding school and the humanism of his later years, the demands and conflict of his art and his need to make a living, a destructive bent toward alcohol and a need to self-medicate, a southerner living in a northern city. The audience is invited into the struggle with the hopes the loony man on stage can keep it between the lines.

Rusty noted that a scene in which the man dances with the typewriter particularly moved him as the man had a romantic relationship with his art. That can’t be seen, however, without the juxtaposition of why he lifted the typewriter from its table: to throw it across the room. At turns he fought for a journalism, “without the ads,” acknowledged that “Hollywood pays the bills,” and struggled with self-doubt about his own excursions into each.

As the play nears its conclusion, Agee, The Man, the tortured soul on stage, the man who would be loony, returns to a quieter time and place. It’s a place we, particularly, recognize: Knoxville, Summer 1915. “We are talking now of summer evenings in Knoxville, Tennessee, in the time I lived there so successfully disguised to myself as a child.”

The final passage, self referential and universal and concluding, as the play begins, with music from Chaplin’s “City Lights,” leaves the audience rapt and immersed in thoughts larger than the life of the loony man on the stage and larger than each of us, “So it begins. Adam is in his earth . . . tempted and fallen, his doom made sure the very instant of his birth. And whose deathly nature all things must endure . . . The hungers of his flesh, and mind, and heart, that governed him when he was in the womb . . . all these ravenings will multiply in every part . . . and release him only to the tomb. Meantime, he works the earth, and builds up nations, and trades, and wars, and learns, and worships chance, and looks to God, and weaves the generations . . . which shall his many hungerings advance . . . when he is sunken dead among his sins . . . Adam is in this earth . . . So it begins.

You have two more chances to engage this provocative piece of art: Thursday night at 7:00 PM and again on Sunday at 3:00 PM. The cost is $13 and tickets may be purchased here or at the door. The book is also available for purchase ($15) at the same link. To hear my interview with R.B. Morris about the play, listen to the podcast. And you’ll want to take a friend so you can talk the whole thing through when it ends.