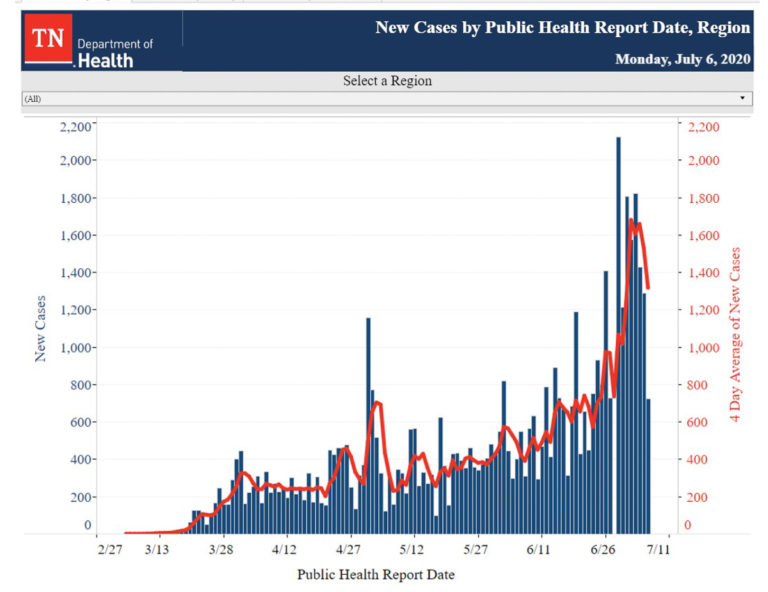 I hope your first full week of July is going well. Attention this week and weeks after will be increasingly focused on the looming start of a new school year. The School Board is set to take up the issue tomorrow. As we judge our leaders nationally, at the state level and locally, we should demand smart, science-based and thoughtful responses to the virus from each. At the same time, we must acknowledge that there is no paradigm and there is a distinct shortage of perfect solutions.

As of this writing, there are 11,788,097 cases confirmed across the world since the beginning of the pandemic, with 171,508 of those cases coming yesterday. There are just under 4.5 million active cases worldwide, the highest confirmed number at any point. The seven-day average of new daily cases sits at just under 192,000.

To this point, there have been 541,845 deaths worldwide, with 3,583 reported yesterday. After a sharp incline early in the pandemic, daily deaths dropped significantly before leveling off and beginning to slowly rise again in recent weeks. The current seven-day average for daily deaths sits just under 4,600.

The United States, which has long reported the most total cases and deaths in the world, continues to lead by large margins in new cases, perhaps fueled by a much more robust testing program than other global hot spots, but also fueled by a second surge of cases which has surpassed the initial increase. The top three countries continue to contribute well over half the new cases in the world, while the U.S. alone contributed about a third of the worldwide cases and more than the other two countries combined. The top three countries were: the U.S. (50,586), India (22,510) and Brazil (21,486).

European countries, which led the world in total cases and deaths in the early stages of the pandemic have now been largely replaced. The top five countries for total cases are now (in order) the United States, Brazil, India, Russia and Peru. The top five countries in total deaths (in order) are the United States, Brazil, the U.K., Italy, and Mexico. Given current numbers, expect Mexico to move up the list and India to take a spot among the top five.

Twenty-three countries reported at least 1,000 new cases yesterday. South Africa and the Philippines stand out for their high rates of increases. It’s a concern that numbers are increasing at high rates among countries with limited medical capacity to respond and impoverished citizens who cannot easily survive any economic downturn.

Brazil’s President Bonsonaro, who I’ve mentioned before as repeatedly trivializing the pandemic and notoriously not wearing a mask or keeping distance from supporters, has now tested positive for the virus. He wore a mask as he made his announcement. He has stated before that if infected, he would easily shake it off. He attended a small luncheon on Saturday and sat beside the American Ambassador to Brazil. No one wore masks.

Melbourne, Australia is entering a second lock down and will remain sealed for six weeks due to a surge in cases. It shows the different levels of response around the world, as their “surge” resulting in six weeks of additional lock down was 191 cases in a city of almost 5 million. As a comparison, Knox County has less than a half million, or about 10% of the population of Melbourne, while we have about half that many cases routinely in the last week and no one is discussing a lock down.

Meanwhile, in England, several pubs re-closed after last weekend’s much ballyhooed reopening due to confirmed cases among patrons.

The United States has crossed the three million mark in total cases, to reach 3,056,589 total cases. Yesterday an additional 50,586 cases were added, as the recent increases continue. The current seven-day average for daily cases continues to rise and sits at just under 51,400. There are approximately 1.6 million active cases.

Total deaths continue a slow decline at this time. Since the beginning of the pandemic, 133,279 Americans have died. An additional 378 died yesterday, giving us a current seven-day average of  517 deaths per day. It reflects a major improvement from late April, but still equates to 15,000 Americans dying each month if the rate doesn’t go further downward.

Yesterday’s number reflects their largest total, by a wide margin, since the beginning of the pandemic. Other southern states ranked highly yesterday include Alabama (#10) and Tennessee (#15). Kentucky, more of a border state, is also an interesting story. Used early as a contrast to Tennessee in how they handled the virus, the state reported 776 new cases yesterday, to rank thirteen highest for the day. That is somewhat deceptive, since it appears that number is a three-day total.

In national news, Atlanta Mayor Keisha Bottoms, who has been in the news recently as a possible running mate for Joe Biden, has tested positive for COVID-19, along with her husband and daughter. The Trump administration has determined that international students must leave the U.S. if their colleges only offer online courses this fall. There are increasing reports of test capacity being overwhelmed across the country, like this incident in San Francisco.

Florida, which has exploded in new cases, also has extremely high and increasing positive test results (about 15% positive). They currently rank third in total cases and restaurants and gyms have been closed once more in south Florida. Governor DeSantis said yesterday the situation has stablized and also had his Education Commissioner issue a directive that all state schools (unless they petition for an exemption) must reopen this fall and operate a five-day schedule.

The state of Tennessee reported 724 additional cases of COVID-19 yesterday, to bring the total to 52,155 cases. 766 people were newly counted as recovered and 7 people died, reducing the active case number by 49 to 20,482. A total of 653 people have died.

Hospitalizations continue to increase across the state. As indicated by the graph above, that number has increased over 50% in the last two weeks and currently sits at 758. There are an additional 354 pending cases among hospitalized patients.

Testing dropped dramatically after a week in which it had surged. The important rate of positive test results, which had dropped slightly during the surge, increased slightly to a seven-day average of 7.7%. 5% is considered the upper limit to indicate a testing program is finding enough of the active cases to bring the number down through subsequent quarantines.

Locally, the Knox County Health Department reported 70 new cases today, tying for the third largest single-day increase. Each of those, as well as the two highest single-day totals have come in the last week. The total number of cases in the county since the beginning of the pandemic is 1,366. Over half of these have come in the last four weeks. There are currently 563 active cases which have been identified in the county, a new high.

19 Knox County citizens are currently hospitalized, which is down from 22 yesterday. There are no new deaths to report. The benchmarks, including the regional hospital picture will be updated tomorrow.