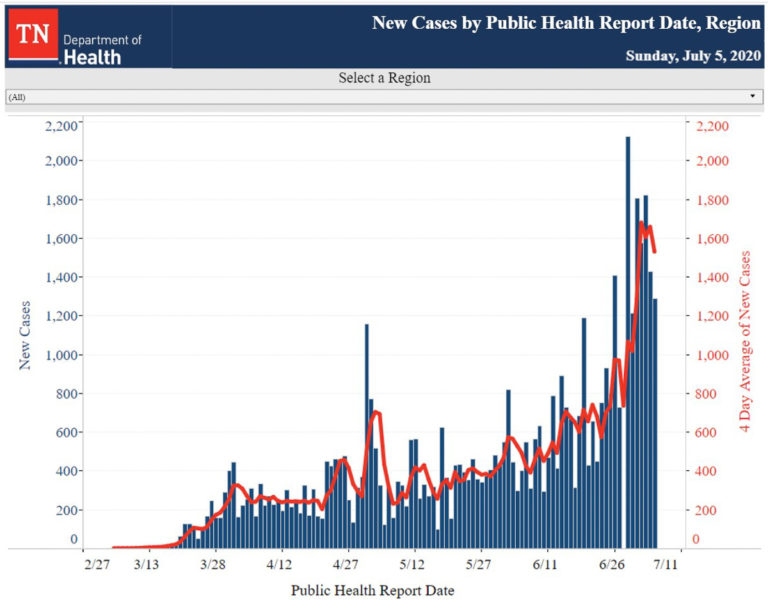 I hope each of you had a wonderful weekend with some time with people you love. For those who had to remain apart from family, it was difficult, no doubt. The highlight for us was watching fireworks from the balcony of our home. I know not everyone is a fan, particularly dog owners. I haven’t always loved the noise and risk of fire, but I have to say, this year it felt OK, to me. People want to blow stuff up. I get that.

As of this writing, there are 11,591,523 confirmed and reported cases of COVID-19 worldwide since the beginning of the pandemic. 537,442 deaths have been reported. Since the last report, a global record was set on Friday, with 210,467 new cases being reported. This followed a record set the previous day, when new cases crossed 200,000 in one day for the first time since the beginning of the pandemic. As true to the weekly cyclical pattern, the numbers dropped on Saturday and Sunday, with yesterday’s total new cases coming in at 175,499.

The number of deaths continues to be the best news internationally. After peeking early in the pandemic, the rate of deaths declined and then leveled off. Average daily deaths have remained in the mid-4000s for nearly two months. Following the weekly cyclical patter, there were fewer deaths yesterday, at 3,572, but the seven day average remains about the same at 4,526.

Patterns remain much the same as last week as we exit the weekend. About 2/3 of all cases reported yesterday were concentrated in three countries: the United States (44,530), Brazil (26,209) and India (23,932). Brazil has tested about 1/7 as much as the U.S. per capita and India has tested less than half Brazil’s rate, meaning the numbers in each of those countries is larger by several orders of magnitude than those being reported.

The leading countries in reported deaths yesterday were Brazil, Mexico and India. These numbers are likely well below actual deaths, as many people in those countries are never tested. Also, the rate of deaths in Russia are, almost without doubt, drastically under-reported as their mortality rate is a fraction of most other countries. Their case counts are also very dubious.

Even with the dominance at the top of the list, there are growing numbers of countries reporting at least a thousand new case per day. Twenty-four countries did so yesterday and, again, the same regions of the world are currently hardest hit: The Americas (10), the Middle East (6) and Southeast Asia (5). Outside of these areas, South Africa seems to be the greatest current concern with high rates of spread and a growing problem.

In what may be a preview for the re-openings of museums, the Louvre opened in Paris for the first time in months, but reservations, crowd limits and face masks were the norm. British pubs reopened this weekend and by some counts it did not go well, with one official observing wryly, “Drunk people can’t socially distance.” Amidst the alarming COVID-19 rates in South America, one country (Uruguay) stands alone in a much more aggressive approach that has resulted in a much better outcome to this point.

After setting a new daily record for reported cases on Thursday (57,232), the number of cases followed pattern and dropped after the weekly peak. The weekend numbers may also have been impacted by reporting over the holiday weekend. Yesterday, there were 44,530 new cases reported and the current weekly average sits at 49,486 new cases each day. The total number of cases since the beginning of the pandemic is 2,985,897.

The death rate continues to be the bright spot for COVID-19 news. While large numbers of Americans have died (132,610), the rate at which we are dying has slowed considerably and continues to slow, though not as steeply. 251 deaths were reported yesterday, which is the lowest since March 23. The weekly average sits at 511. While we’ve discussed possible reasons for the dropping deaths in the face of rapidly increasing cases, the complete explanation is not know and likely won’t be for some time.

A number of federal workers begin returning to offices this week. Studies are beginning to come in on the unequal distribution of the virus among sub-groups in the U.S. and indicate black and Latino U.S. residents are three times more likely to get the virus and twice as likely to die (per capita). Kimberly Guilfoyle, a senior aide to the Trump campaign (and Donald Trump, Jr.’s girlfriend) has tested positive for COVID-19.

After setting two consecutive weekly records for numbers of cases (4,905, 5,726), the state of Tennessee ended last week with a total of 9,968 cases, or nearly the total of the two previous record-setting weeks combined. Prior to last week we’d only surpassed 1,400 cases in a single day once: the week before. This past week we surpassed that number four times, and surpassed 1,800 twice.

Yesterday, a total of 1,291 new cases were added, while 211 recovered and 9 people died. The current number of active cases in the state is 20,531. Two weeks ago, it was 11,509 and concern was being expressed at that level. Over that same period, COVID-19 positive current (not cumulative) hospitalizations have increased from 448 to 652 across the state.

Eleven additional patients were hospitalized with the illness yesterday and the state reported giving about 17,500 new tests yesterday, to bring that total to about 896,000 tests given. As the state has increased testing fairly dramatically over the last week, the percentage of positive tests has dropped, as would be expected. It remains, however, at 7.7%, well outside the range of 5% or below in which the testing level is thought to be adequate.

The number of active cases in Knox County has reached 495. 20 Knox County residents are currently hospitalized with the illness. This does not include any patients from outside the county who are hospitalized here. Regional hospital information (for an 11 county area) is only updated on Wednesdays. There are 30 probable cases.

Dr. Buchanan led today’s conference and began by thanking organizations and individuals who have stepped up to serve others during this difficult time. She confirmed the above numbers, noting particularly the three people who died since the Friday press conference.

She addressed the wearing of face masks, expressing regrets that face masks have become political. She said she has heard from both sides. She said there is much misinformation on both sides of the issue. She said we are still learning about the virus, including spread. She acknowledged that masks were not initially recommended, but what we’ve learned since then and hence, the recommendation changed.

She said it helps a person who is infected, but who has no symptoms, from infecting others. The wearing is now recommended by all major medical associations and is no longer debated in professional circles. You don’t need to wear a mask outdoors if you can maintain distance from others. She pleaded for people to be kind to those who disagree with them.

She reviewed the Tennessee Code as it relates to the Board of Health, explaining it does give them authority to institute needed health measures. As for enforcement, she said the intent is to issue warnings and masks. She said she hopes citizens and agencies will cooperate. Call 311 if you have complaints regarding non-compliance.