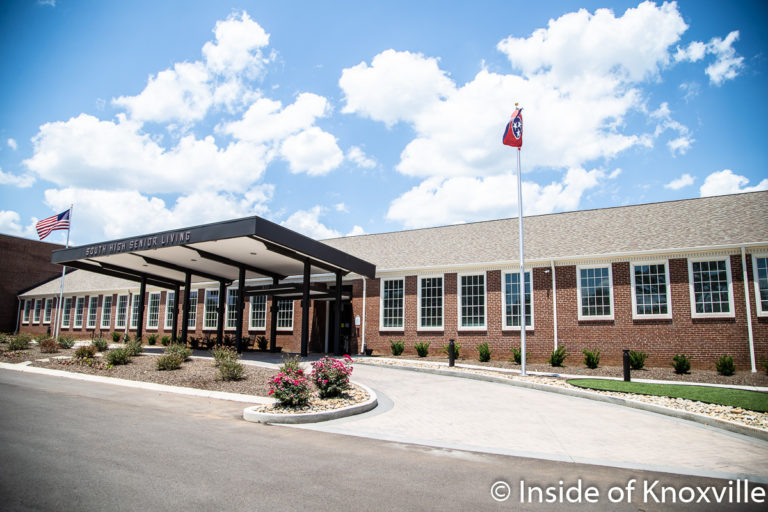 South High Senior Living, the latest project from developer/owner Rick Dover opens today to new residents. The project started with a building, the former South High School, which had literally fallen in on itself. Mr. Dover said it took most of a year simply to clean out the roof and other structures that had to be removed before renovations could begin.

The project took several years and over twelve million dollars to bring the building back to life. South High School closed its doors in 1991 after serving students since 1937 (first as a junior high), and the building remained empty until the current renovation. It was purchased in 2008 by a developer who failed to see the project through and it was ultimately re-purchased by the city in 2015. A request for proposals to save the building netted a total of one and that one from Dover Development, which purchased the building from the city.

With the opening, South Knoxville will have a new state-of-the-art facility serving residents who need assisted living support, including medical professionals. It will also include a memory care unit for seniors experiencing dementia. The new building includes sixty-two total private and semi-private rooms, of which more than a dozen are spoken for prior to opening. Heather Haley, Regional Director of Sales and Marketing said that most are long-term south Knoxville residents, including some who were students at the school.

Led by Executive Director and certified Dementia Practitioner, Helen Porter, the new facility has opened during a strange time, but Dover said that it has actually been beneficial in one regard: protocols required for operating a senior facility during a pandemic have been put in place from the outset. As a result no re-training was required.

The facility, like other assisted living facilities will be closed to visitors starting today in order to protect residents from COVID-19. All staff have been tested and all residents will be tested. A temperature screening, completion of a short medical survey and a mask were required for my entry. Unlike other facilities which have been in operation, it is a pristine environment from which to start at this time.

The Licensed Assisted Living development is beautiful, light and spacious. Identical to Oakwood Senior Living, another Dover property, in function, skilled nursing is available at all times. This is a distinction from Knox High, also developed and owned by Dover, which is Independent Senior Living. Dover properties have won numerous preservation awards and other recognition, the latest of which came from the highly respected Urban Land Institute, which listed Knox High as one of ten examples nationwide of senior housing utilizing next generation, contemporary design.

Numerous amenities are included for residents, from a billiard room and gathering spaces to a salon and activity room. Maddison Boling, Vibrant Life Director, is in charge of planning and executing activities for residents. She has family members who both worked at the school and attended as students, so she’s excited about her connection to the new facility.

At over 46,000 square feet and in very difficult condition, the task was a big one, but one that Dover said excited him from the beginning. He said he’s always wanted the honor of transforming a Charles Barber building and this was his first opportunity. For the project, he was able to work with Barber McMurry Architects, the firm co-founded by Charles Barber.

“Because it was a a Charles Barber building, it had special meaning. Barber McMurry had the original drawings in their archives.” He said it is so beautiful because of the inspired design scale, with he called “proper proportion for humans.” The ceilings are twelve feet high throughout and the hallways are about twice as wide as contemporary designs.

Not incidentally, the spaciousness of the facility will allow for comfortable social distancing. In addition to the large gathering spaces inside, there are outdoor seating areas available.