Standard Knitting Mill May Be Redeveloped After All 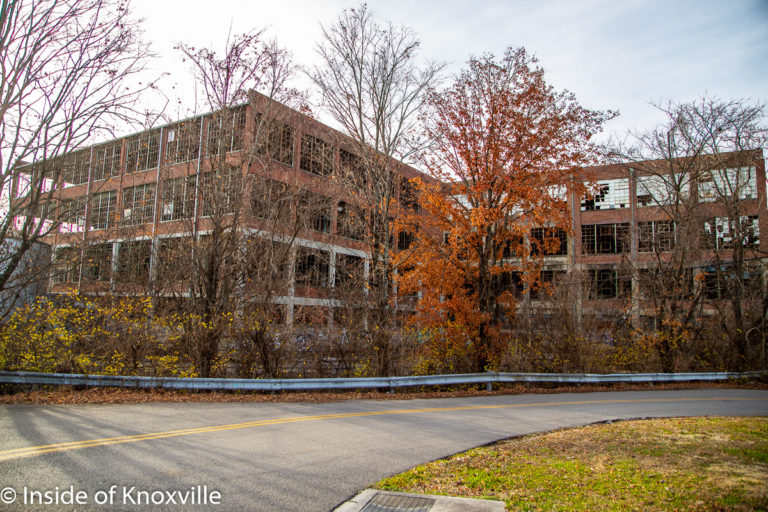 It’s had a long, tortured journey. According to Knox Heritage, Standard Knitting Mill was founded in 1900 with about 50 employees. By the 1930s it employed over 4,000 and at one point it produced a million garments a week. The plant was last operated by Delta Apparel, which left in 2007. The lone remaining building was built around 1945 and includes about 430,000 square feet.

In recent years, Knox Heritage has routinely listed it as an endangered property, and it has languished, as have other properties under ownership that included Brant Enderle and partners. A group including Enderle bought the building several years ago for $500,000 with promises of redevelopment, which never materialized. WRS Investments out of South Carolina recently purchased the property for over $4 million and announced their intentions to redevelop the site.

Bill Lyons, Deputy to the Mayor, said he has seen as many as fifteen different proposals for Standard Knitting Mill in his years in city government and that redevelopment of the property has been a priority for the Rogero administration. The fact that previous attempts came to naught led to a question from the audience regarding how much tax-payer money is at risk should the current project not come to fruition. Lyons indicated that the structure of the deal would prevent the city from being liable if the project isn’t completed. Lyons called the current project “ambitious and visionary.”

Peter Davis, Director for Acquisitions and Development for WRS, said the company, which closed on the property just two weeks ago, sees Knoxville as a “gem” and the building as a “billboard to the city from the Interstate.” He said the process to purchase the building, including due diligence to determine the challenges of redevelopment, took about a year.

Noting that the company is in the early phases of exploring specifics with the building, Mr. Davis did indicate they have a wide-angle view of what they hope to accomplish. The focus will be on mixed-use development with some components of housing, office, and retail. He said they hope to enliven the surrounding area and said he’s open to ideas for connections to the adjacent Caswell Park and expanding the greenway along First Creek.

Saying the intention is to utilize as much of the building as possible, including the rooftop, he said the company plans a series of public meetings to obtain input. They also intend to preserve the adjacent Ridley-Helton Stadium (formerly Bill Meyer Stadium), though a portion of the left outfield may have to be sacrificed for the planned boulevard. Historic tax credits will likely be utilized and the equity portion of the project has not been finalized.

The boulevard is to improve access to the site, which is currently very limited. Bill Lyons made the point that the boulevard will be tree-lined and friendly to cyclists and pedestrians, as well as vehicles. The cost for the boulevard will be about $5 million, with the city’s portion capped at about $3.5 million, payable on completion of the project. Parking will also be added beside the development and a twenty-five-year PILOT will be granted, pending approvals.

Mr. Davis said that the company wants this to be an “inclusive project” and they “want it be a thriving, dynamic mixed-use development for everyone.” While declining to put a time-line on the project, he said it will not be fast. The first step is to remediate the toxic waste on the site produced by long-term uses of bleaches and dyes without sufficient safeguards.

The company’s highest profile project to date is Underground Atlanta, which encompasses four city blocks, both underground and above. The company purchased it four years ago and “preserved the historic parts and tore down the bad parts.” The group said they learned a lot from that development that will translate to this new project. They took what was mostly a two-story area and increased it to eighteen stories. They hope to re-open it next spring.

Someone asked whether the current project might be expanded upwards. Mr. Davis said that with the large amount of square footage in the four-story building expanding upwards isn’t likely. When pressed, he implied that if this goes well, there may be adjacent parcels that would be amenable to future, perhaps more vertical, development.