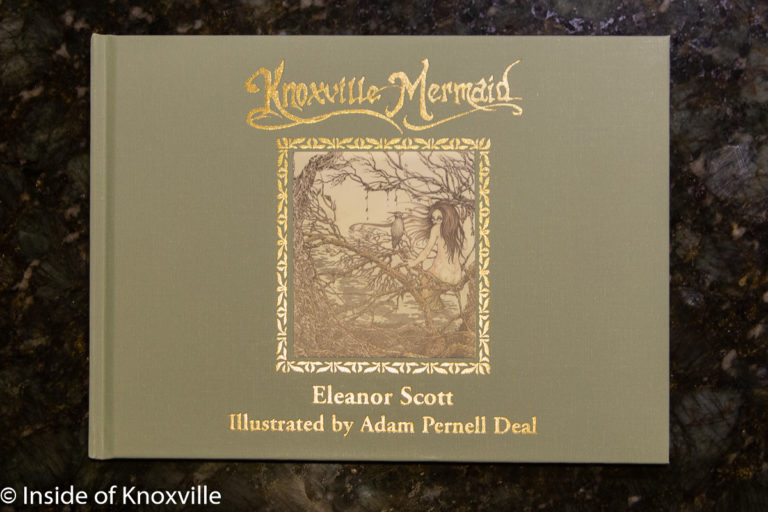 Eleanor Scott and Adam Pernell Deal have produced an excellent new picture book, “Knoxville Mermaid,” worth consideration for a spot beneath the Christmas Tree. Deal’s illustrations are compelling and complex, while Scott’s narrative, simple as a ballad, deals in complex realities intertwined with a touch of magic. Children will love both the words and the pictures and, incidentally, will be introduced to their city and its environmental struggles.

Adam was born in Southwestern Pennsylvania, and later his family moved to Loudon County. His dad was a postal worker and simply decided to follow a pull he felt to the area. Adam always drew and still has his first drawing. As he’s developed his style, Adam has drawn the posters for the Knoxville Horror Film Festival and album covers for a range of bands including Judge Schreber’s Avian Choir and U.S. Christmas. Locally, he’s drawn the illustration of Elkmont Exchange’s Elkmonster beer.

Eleanor is from Middle Tennessee and arrived in Knoxville in 1999 to attend the University of Tennessee. She obtained her degree in English and considered librarianship, but she began work at the Book Eddy (then in South Knoxville) in 2002 and was drawn to book selling. She loved the flexible hours and has continued to enjoy working there off and on, including presently at its new location at 1621 North Central Street. It works well for a mother with two young daughters.

You may have first read Eleanor’s words in Metro Pulse. She loved the newspaper for its hyper-local focus and thought it was “funny, smart, had a different perspective, and took deep dives. It helped me fall in love with Knoxville.” She wrote an email to Coury Turczyn who opened the door for her to write a column of hyper-local untold stories called “A Living World.” He later offered her a column with Mercury.

As a stay-at-home mom, she continued to think and read about the city and its hidden stories. She was fascinated by hidden parts of the city, such as the creeks that run underneath our streets and sidewalks. She began joking about seeing a mermaid and became fascinated with underground Knoxville.

The idea sparked about five years ago as Eleanor spent time along the river. Given Adam’s talent for drawing, the idea began to take form and seemed “silly not to do that,” Adam said. “We meet in a good place creatively.” He works in the school of Surrealist Automatism, in which the artist has no preconceived idea before the drawing begins.

The book plays out a story a grandfather tells his grandchildren about his encounter with a mermaid in the waterways under our city. Eleanor said that as she developed the story, she thought of issues like the volume of microplastics in the Tennessee River, which she says are higher than any other river. She thought of those unseen places that are toxic corridors of trash and also support wildlife, places “exciting and magical, full of life even though that are so polluted.” You may sense echoes of “Knoxville Girl” turned on its head in which the Knoxville Mermaid retains the upper hand.

The cloth-bound, high quality book may be found at Union Avenue Books (where I bought my copy), The Book Eddy, and Three Rivers Market. Today only you’ll have a chance to purchase a copy and have it personalized by both the author and the illustrator at the Old City Market, located in the Old City on Jackson between Central and State Streets. Adam will also have prints for sale.