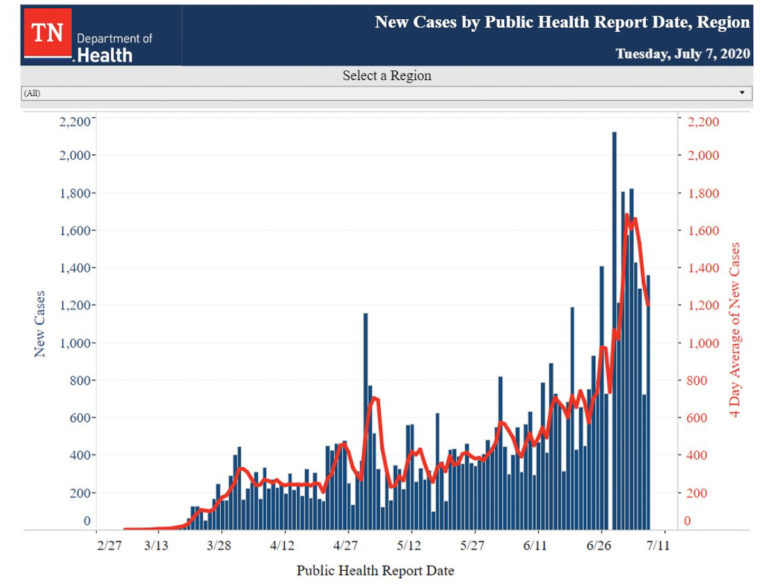 It’s mid-week and we’re about to get some tentative answers about schools in the county. Political leaders are making their feelings known. Parents, teachers and students have their own feelings as we’ve struggled with controlling the illness as well as containing economic and other damage. There’s a lot going on. Please be thoughtful and safe as we navigate this difficult time, so we can come out stronger on the other side.

As of this writing, there are 12,000,656 confirmed and reported cases of COVID-19 across the world since the beginning of the pandemic. 208,087 cases were reported yesterday. This is the third highest number reported since the beginning of the pandemic. The two days with more cases came last week. Our seven-day moving average is now at 196,587 cases per day, the highest it has ever been. It took five days to add the most recent million cases.

547,808 deaths have been confirmed and reported across the world. Yesterday’s total of 5,515 reported deaths is the highest total since June 16. Whereas global deaths from the illness declined significantly from mid-to-late April to late May, the numbers have leveled off and slightly increased since. The current seven-day average for daily deaths is 4,630.

The top countries for new infections yesterday remained largely the same: the U.S., Brazil, India, South Africa, Russia and Mexico (in that order). The United states and Brazil accounted for half of the world’s daily increase. The number of countries reporting at least 1,000 new cases daily continues to expand, and yesterday totaled 24.

While the biggest cluster continues to be the Americas, a sprinkling of new countries around the world are joining the list, such as a re-emerging Israel, Cameroon and Kazakhstan. Countries that stand out with high rates of increase include Colombia, Argentina, Iraq and Cameroon.

To help struggling restaurants, the U.K. is paying half patrons’ tab if they dine M – W. Here’s a look at Israel’s current struggles and plans. Anti-lockdown protests are not just limited to the U.S., as Serbian protesters storm parliament over anger regarding government restrictions.

Total U.S. cases since the beginning of the pandemic is now 3,114,458. Yesterday, a total of 55,442 new cases were reported. This is the third highest day since the beginning of the pandemic. The two higher days were reported last week. The seven day average of daily cases is currently 52,908. During the first peak, which resulted in a near-nationwide shutdown, the daily average peaked at just over 32,400.

Deaths in the U.S. have declined sharply over the last months, but yesterday saw 993 deaths to bring the total American deaths to 134,140. The 993 deaths marked the largest number of deaths in a single day since June 10. The seven day average for daily deaths is 556. The average has increased for the last two days, but whether that begins a trend or indicates a statistical outlier will be determined in coming days.

One interesting note regarding deaths: The states reporting the most deaths have now shifted to the states which have, for the last month, reported the most cases: California, Texas, Arizona and Florida. Together those four states reported about 1/3 of the total deaths reported yesterday in the U.S. States with early severe cases loads and high deaths have largely dropped from the top of the list of daily deaths.

Today, President Trump threatened to withhold funding from schools that do not open to in-person classes this fall and said CDC guidelines are too stringent. MIT and Harvard sued the federal government over forcing international students being expelled from the country if they don’t attend in-person classes. Brooks Brothers became the latest large established U.S. company to file for bankruptcy.

The twelve deaths bring the total since the beginning of the pandemic to 665 Tennesseans. An additional 53 people were hospitalized across the state and about 16,500 tests were given to bring that total to around 921,000. The seven-day average rate of positive tests rose slightly to 7.8% indicating Tennessee is likely not finding all its cases. Regarding hospitalization, the total number of COVID-19 positive hospitalized patients continues to rise and currently sits at 782 confirmed cases and 378 for which tests are pending.

Locally, the Knox County Health Department reported 54 new cases as of this morning, bringing the total for the county since the beginning of the pandemic to 1,420. Of these, 616 cases (43.4%) are currently active. As of this report, there are 34 hospitalized Knox County residents who have tested positive for the illness. This represents a 79% overnight increase. The number yesterday was 19 in the hospital.

An additional death of a Knox County resident was reported, bringing that number to 10. Half of those deaths have come in the last six days. There are 30 probable cases reported. Since new data was released today, I’m including the chart below, which indicates rates of usage for hospital beds, ICU beds and ventilators. The numbers have increased, but hospitals feel confident they can manage at current levels.

As I write this, Vice-President Pence is speaking on education. Later this afternoon, Governor Lee is expected to do the same. Immediately following his remarks, the Knox County School Board hears recommendations for their task force. It should be an interesting news afternoon regarding schools.

Charity Menefee chaired the meeting. She said $7.1 million dollars should be coming to the Knox County Health department as aid from TDH to deal with the pandemic. If received, it would be the first assistance provided to the department. It should allow continued contact tracing, etc. It will allow staff to resume some services which had been reduced.

She confirmed the above numbers and addressed the benchmarks, which were updated today. Regarding cases, she said that will remain red as determined by the standard of reduction or stability. She said the trend in new cases is clearly upward at a statistically significant pace. For the benchmark regarding testing, the traffic light was shifted from red to green as there has been improvement.

Regarding public response, they feel they are doing well building the contact tracing team and are keeping up with demand. She skipped the fourth benchmark and discussed the death rate benchmark. That traffic light is red as there has been a doubling of deaths over the last week.

With regard to the fourth benchmark, hospital capability, the traffic light is yellow as there were significant increases. Needs are currently being met, but the hospitals felt we’ve entered a cautionary phase. Dr. Gray, a hospital representative spoke, noting the significant increase in cases across the state. Positivity rate and hospitalizations have increased, as well as ICU and ventilated patients.

In the 11 county region he said there has been a sharp increase in the last two weeks. The expectation is more than 50 cases a day, which he said he never thought he’d have to say. He said the local positive test result is 3.9, which is nearly double what it was before, but still within the desired range. He said there is a 100% increase in hospitalizations and ICU usage in the last month. There has been a 150% increase over that time in ventilator use.

He assured people that hospitals are a safe place to seek care for COVID-19 or non-COVID reasons. He said they feel they are confident at this time that they can meet needs. They are testing as many people as possible to keep everyone safe. COVID or potential positive patients are isolated. PPE is adequate. They are reviewing surge capacity as it is reduced due to resuming normal operations. A new surge plan is being developed.

He summarized that the situation is much more urgent than a month ago, but there is no need for fear. He pleaded with the community to follow guidelines to wear masks, keep distance and stay at home if possible. He emphasized masks as an opportunity to protect the community.