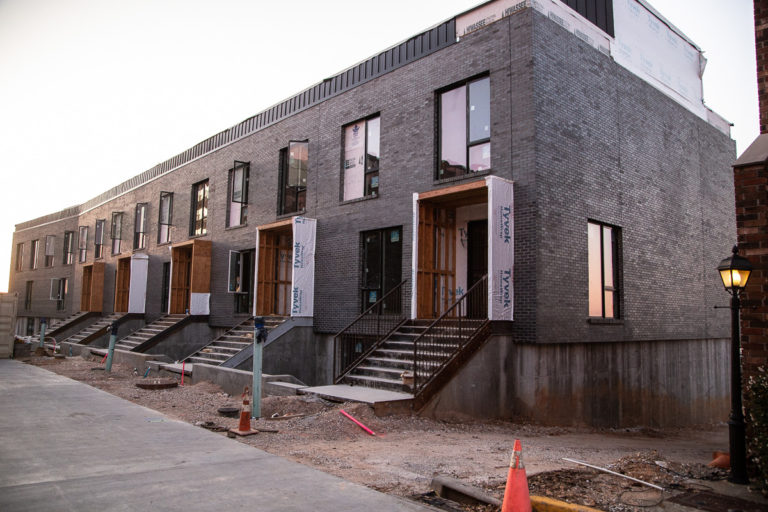 I was startled recently when a reader made a comment about Stockyard Lofts, suggesting they had not started construction and were past completion date. The surprise came when I checked my article about the project and realized the reader was correct! The article was written two years ago with a completion date of last summer for Stockyard Lofts.

It’s a topic of endless interest to many readers: What is being built, when will it be finished, and why hasn’t it been built already? Every time I write an article about a construction project, I get asked about several other projects. I’ve found a little information on various projects for this article. I couldn’t find all the answers, but let’s look at what I did unearth.

Let’s start with the above mentioned Stockyard Lofts. It turns out that about the time that question was being asked, the project had gotten underway with the staging of equipment and supplies and the beginning of demolition and clearing of the site. Many recent transplants or visitors to downtown may not realize there was once a large covered stage on the property behind Barley’s Taproom and Pizzeria.

It was placed there over a decade ago by the Wests who were, coincidentally, partnering with Leigh Burch at the time. Coincidental because Leigh Burch and Daniel Smith are behind the current project, which resulted in the demolition of the stage. It’s interesting to consider that its construction years ago could be considered progress while its current demolition represents the same.

According to the developers, the delay in the project was related to a HUD requirement for a variance on sound coming from the switchyard. Financing was held up pending approval. Everything finally came together to green light the loans at the end of September, allowing construction to begin. Construction should last 18 to 20 months, meaning the apartments should be ready for occupancy in early to mid 2021.

Moving on to the Old City, it’s been a while since I gave an update on the Old City Performing Arts Center. I spoke to Joshua Peterson and learned that the project is on track. They’d hoped to have a production this fall, but that will not happen. Instead, expect an open house on First Friday in November, and their first production will be their annual Christmas production of “The Unusual Tale of Mary and Joseph’s Baby.” Around the same time as the open house, you should expect a couple of other major announcements, which I’ll tell you about here.

Moving on up the hill from the Old City, curiosity continues about Tim Hill and Hatcher Hill’s project City House on Vine Avenue near Immaculate Conception Catholic Church. The exterior, front and back, is nearing completion, and Mr. Hill tells me drywall is being hung on the inside. Once the finishes start, projects move rapidly. One unit is spoken for, with occupancy in January.

Well across downtown, down that hill and almost to the river, is The Overlook, a six story development at 608 West Hill Avenue. The development as it stands has ten units. Eight are sold, even though the homes are not quite ready for occupancy. The remaining two are on the second floor and will face Hill Avenue. About half of the others face the Tennessee River. Completion is planned for the summer of 2020.

Finally, I know many of us are curious regarding the Wild Wing Cafe in the Kress Building on the 400 block of South Gay Street. Signs have been in the windows for months. When I toured the building last March, owner Dave McFarland indicated that he hoped the restaurant would open at the beginning of football season. With no apparent work underway, it’s a bit of a head-scratcher. I reached out to McFarland but got no response in time for this article. I’ll let you know as soon as I hear more.