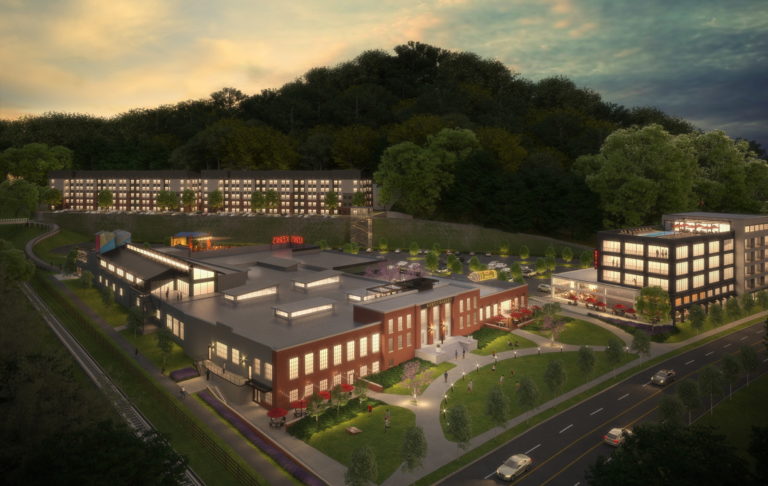 For a place with so much promise, it’s been a long and twisted journey. A series of owners has produced evolving plans that stalled and never came to fruition. Potential and promise simply never translated into a viable project able to move forward. The sixteen acre Kerns Bakery site has been purchased by Mallory and Evans Partners, LLC out of Scottdale, Georgia whose principals, Brantley Basinger and Alex Dominguez, make it clear they intend to change that track record in short order.

The plans call for multi-use development, including preservation of the historic building for use as a combination retail, hospitality and office space. The hope is for a high-tech space intended to be a gathering space and functional asset to the other portions of the development. At 75,000 square feet, there is room for a range of uses. In the press release, Dominguez said, “We imagine the large bakery itself will house an eclectic, locally-sourced and highly-curated mix of restaurants, smaller food vendors, specialty purveyors and even collaborative office space.”

The intention is to have businesses that complement one another and to have the building have not only extremely fast internet service, but to have smart technologies built in that will help optimize space usage. The basement below will be available for storage so that businesses do not have to allocate potential retail space to a non-revenue producing use.

A 160 unit “boutique-style” apartment complex will be built to the rear of the property overlooking the site, and offering views of the Knoxville skyline. Directed at young professionals starting their careers, amenities will be directed at these near-and-recent graduates.

A small number of one-bedroom units will be included, with the remainder being two-bedroom units designed for roommates. All apartments will be fully furnished and will offer the latest in smart home technology. It will also offer a pool, fitness center and clubhouse.

An outdoor entertainment space between the apartments and the current building will be used for concerts and other events. Completing the plans will be a “brand-name limited-service hotel . . .” Located toward the front of the property, the hotel will front Chapman Highway and, according to the developers, will include a restaurant on the northern side addressing the Kerns Building. Parking, they tell me, will be under the hotel.

I was graciously offered the opportunity to speak with the developers via conference call to ask follow up questions. Clearly excited about the opportunity to develop the site, they told me a bit more about their plans and what led them to this spot in the first place.

Mr. Bassinger said their company was approached with the possibility of developing the site and they were immediately interested given the access to downtown, public transportation and the urban wilderness via the rails to trails development beside the location. A market analysis suggested these planned uses were the most likely to be successful and the plan was born. “We felt we could fill a need and a product type to fit a high demand. We want to target that young professional and student looking to make the transition from student housing.”

Mr. Dominguez added, “We are excited that it is non-traditional value creation and preservation. The building isn’t perfect, but that creates its authenticity. Every time I went to the city I discovered a new treasure.” Stating that it would be much easier as a developer to level the site and build a Walmart, he indicated this is much more rewarding and referenced Krog Street Market in Atlanta as an example of how transformational a project like this can be for an entire area.

The two also pointed out the fact that the whole is greater than the sum of the parts, in that the components each serve as an asset to the others. The apartments and hotel will deliver a customer base to the businesses, while the businesses serve as convenient amenities for the residents and visitors. Mr. Bassinger said he could imagine family of the apartment residents staying in the hotel for a visit, meeting in the restaurants and the shops for dinner and planning a day hike via the adjacent trails.

I asked about the parking situation, given a number of businesses, 160 apartments and 100 to 120 rooms in the hotel, as well as potential concerts or other events. Parking will surround the apartments on the hill, as I mentioned previously, underground parking will serve the hotel, and some spaces are available. They also pointed out that a public garage with free night and weekend parking is just a short walk away. As developers, they are also seeing a reduction in private car usage with the surge in rideshares. There will be a pickup and drop off location designed into the site for Uber and Lyft.

They see the development as an amenity for south Knoxville. The concert space can accommodate up to 1500 people and will be open to the public. They hope people will park there to begin a hike and return for dinner and drinks at one of the restaurants. They also hope to have outdoor outfitters, perhaps a bike shop and small grocery to fit the residential and recreational spirit of the development.

Mr. Dominguez pointed out that it would “be easier to bring in national chains, but that would damage the uniqueness. We hope to attract a brewery or two, restaurants, provide a co-working space as we preserve and enhance the building.

Both gentlemen gave substantial credit to architect Jimmy Ryan with Johnson Architecture who they said “has been passionate about helping design and develop this vision.” Financing has been helped by the fact that this project falls into an “opportunity zone,” which encourages investment in under-served areas.

Mr. Basinger said the group had been deliberately quiet about the plans, wanting to make sure they had it right and could make it happen, before going public with their plans. They realize both the importance of the site to the city and the fact that there have been false starts before and they didn’t want to elevate hopes unless they were confident they could bring the project to fruition.

The project and its components have not been officially named at this time, but the name will in some way pay homage to the historical importance of the spot. The group intends to break ground in July, starting with infrastructure improvements to support the various components of the development.

They will do some work on the existing structure, but final build-out will be tailored to client needs. They hope to have the apartments and retail/office space operational by late summer or early fall of 2020. The timing of the hotel will depend on how quickly that portion of the project is finalized.

If you are interested in inquiring about possible retail space, a contact template is provided on the landing page for the project.