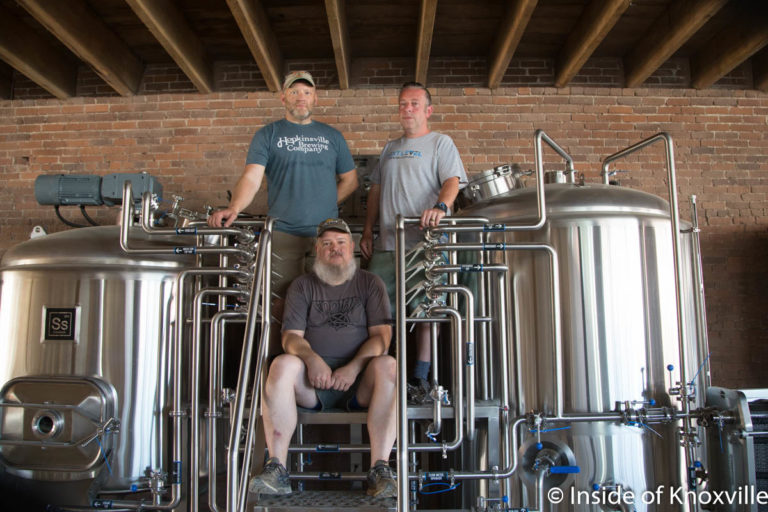 The owners of Next Level Brewing Company, coming to 700 North Broadway, could not be more ready to have the brewery up and running. When I commented that it looked like great progress was being made inside the brewery and tasting room, principal partners Andrew Armstrong, Rick Cox and Nathaniel Sears (Willie Robinson and and Ken Woody are minority partners) made it clear it’s been a long journey. They are ready to make beer and share it with Knoxville.

Nathaniel said, “All of us had this dream.” Andrew added, “It was always a goal when we went to school (Brewing school at South College). Some people did it (school) to get a job,” but they did it with a specific goal in mind of owning a brewery. Nathaniel and Andrew were in the same class and Rick followed them in the next. Subsequently, the head of the program, Todd White, opened the Brewing and Distilling Center where Rick now serves as Lead Instructor, while Andrew and Nathaniel also teach there.

Andrew, who is from Chattanooga, quit his job doing software development and systems administration to attend brewing school, saying he wanted to be “all in.” He said the pay was good, but  he wanted a change. The others did the same. Andrew then wanted to go somewhere very different to gain experience, so he moved to California where he worked with North Coast Brewing in California for two years.

Rick, who is from Harrogate, Tennessee joined the army and after service got his business degree from UT. He worked as a social worker and a high school teacher until he reached a point he decided it was “time to chase the dream and went to brew school.”

Nathaniel is from southeastern Kentucky, but he’s been in the Knoxville area since 2005. He and his wife, Kim, moved here for her to take a better job as an occupational therapist. He credits her as the one who, knowing he was unhappy on his job, encouraged him to attend brew school and chase the dream.

The three all credit the women who have been so supportive. Rick’s girlfriend Laurie and Andrew’s wife Monique have been very encouraging and patient throughout the journey, starting with brew school and the endless hours volunteering at breweries to learn more and experimenting with brewing in Nathaniel’s garage. They pointed out that in 2015 when they attended brew school, there were far fewer breweries in the city, recalling Blackberry, Fanatic and Smokey Mountain Breweries as being very tolerant of their volunteering.

The three had been experimenting with home brewing. Andrew says he’s been homebrewing off-and-on since the mid 90’s. Rick tasted his first homebrew in Guantanamo Bay, Cuba and was hooked and started doing it himself in 2012. Nathaniel had the setup in his garage, so they worked there and, later, Fanatic let them use some better equipment to continue their experimentation.

From the beginning they identified goals for their project. First, they wanted a large system so they didn’t run out of popular brews. The result is a large, ten-barrel system that should serve them and their customers well into the future. They also wanted their high-end product to achieve the consistency in quality that keeps customers coming back.

When it came time to select a location, they took their time to find the right place. The location at 700 North Broadway had a wall of garage doors and a faded “For Lease,” sign. It was a very visible location and the size and price were right. They leased two floors, giving them 7,000 square feet, with an additional 10,000 square feet of dedicated parking. The old garage doors have given way to a great wall of windows lining Broadway.

Their plans for brewing include New England style IPAs, pastry stouts and fruited sours. They hope to adopt some of the modern brewing techniques popping up around the country. Eventually, they hope to have a robust barrel aging program.

The location will include a tasting room with a bar and seating for just under 100. In the space designed by Brett Honeycutt, who has designed a number of local tasting rooms, they also plan to offer food, which will likely come in the farm of rotating food trucks. The design includes electricity for the trucks so they won’t have the drone of generators hurting the customer’s experience. The upstairs space will serve as storage for now, but could be used for expansion in the future should that be warranted.

After a lengthy delays securing financing, they are now moving rapidly on construction, which started in April. They ultimately found Pathway Lending and Keith Hickey who not only helped them secure the loan, but has offered them continuing support. The group said the finance company, “worked really hard to make sure we succeed.” The company, which has a Knoxville office, has previously worked with breweries in Nashville.

The road to realizing their dream has been paved with great support from the brewing community. They mentioned particularly Aaron at Crafty Bastard and the brewers and owners at Pretentious, Abridged and Elkmont. “They can’t wait for us to open. They’ve been very open in helping us avoid mistakes they made along the way.” The group hopes to open for business in July.