New Life for a Historic Building 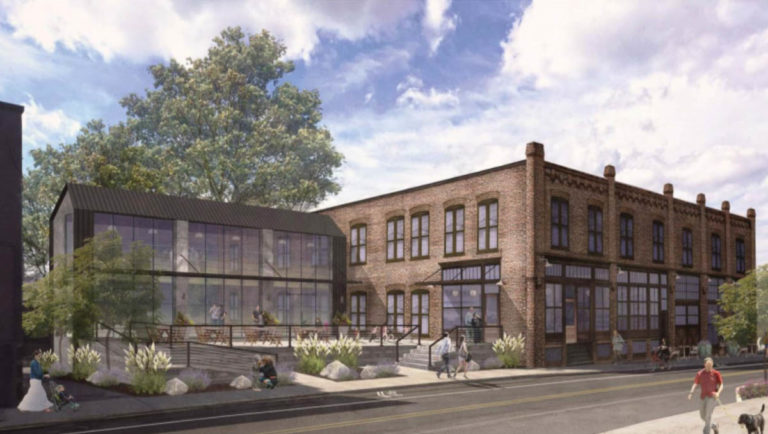 The Dempster Building at 609 – 617 N. Central Street is getting a major makeover. Located in a developing part of the city, the historic building had hit hard times by the end of the last century. It was purchased by Dewhirst Properties during the last recession and was secured until recently when the company began a major makeover.

Built in 1895, it was one of the first buildings in what is now called Emory Place, which at the time was a developing node along the public transportation system of the day. Originally a livery, it soon changed with the times and, starting in 1904, became home to the Whittle Trunk and Bag Company. In the 1920s it was home to Dempster Construction Company and Dempster Motor Company, owned and operated by Knoxville’s sometime mayor, George Dempster and his brothers.

The Dempster name became well known thanks to one of George’s numerous inventions, the Dempster Dumpster. It’s probably Knoxville’s best known export and best-known family name outside the boundaries of our city. Other motor companies occupied the building over the years before giving way to Dixie Kitchens for a time. Dixie Kitchen is now located across N. Broadway behind this building.

The area has gotten a great deal of attention in recent years. Crafty Bastard Brewery, Knox High Apartments, Next Level Brewing, Elkmont Exchange, Paysan Bread, Remedy Coffee and many other businesses have sprung up in the area over the last several years. Last month I wrote about Tim Hill’s redevelopment work just around the corner from this location.

The building is large, with about 30,000 square feet spread over three floors. Mark Heinz with Dewhirst Properties pointed out that it is almost the identical size of the Keener Lighting Building or the Electric Company Building, both of these were also redeveloped by Dewhirst Properties and are mixed-use buildings with commercial and residential uses included.

The Dempster building lost much of its original character over the years as the facade was changed and the interior was modified. Windows were bricked over. It connects in the back (though it is walled off) to 618 Broadway. On the left side of the building there is an extension, which was added over the years, and there are about thirty parking spaces to the right of the building.

The current work focuses on restoring the exterior to its original appearance and returning the interior to the three distinct floors it originally contained. Work will include restoring the windows by removing the brick. The extension has been a matter of discussion, but current plans include making it an attractive ancillary building, with perhaps a different, but complementary, use.

Work at the recently slowed a bit, as the company had to divert their workforce to their buildings on Jackson Avenue to prepare them for the removal of the ramps. Work at the Dempster Building will soon pick up speed, putting  it on track for the current work to be completed within the next twelve-to-eighteen months. If a tenant has been identified at that time, work will begin to build the interior to their needs.

The final use of the building remains a matter of market demand, but the front space will be designated commercial. The annex would also likely have a commercial use. The space formed by the L shape of the two buildings would make a very nice exterior courtyard for an appropriate business. In the absence of demand for the entire building for commercial use, the remainder could easily be developed into condos or apartments, again depending on market demand.

In the short term, you should see the exterior of the building becoming more of what George Dempster would recognize as the prior home to his business enterprises. In the longer term, we might expect another abandoned and empty building to resume its usefulness.