Injustice in Knoxville: Remembering the Riot of 1919 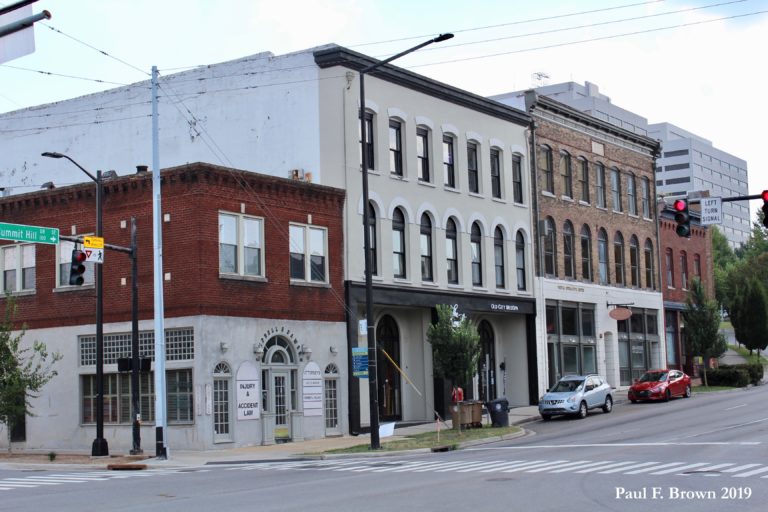 Guest post by Paul F. Brown, a freelance writer in Knoxville, and the author of Rufus: James Agee in Tennessee. He may be contacted through his website: www.paulfbrown.com

Today marks the anniversary of a notorious day in Knoxville history. It’s a particularly embarrassing chapter from our city’s past, one marked by racial prejudice and mob rule. On August 30, a century ago, Knoxville was embroiled in a race riot. Stories of that night’s violence have filtered down to us mixed with truth and urban legend. Robert Booker was 11 when he learned that an elderly, one-legged man hobbling along Central Avenue had lost the other leg in the 1919 riot.

Fascinated to learn more, Booker eventually researched the conflict and authored the book The Heat of a Red Summer: Race Mixing, Race Rioting in 1919 Knoxville. At a recent event sponsored by the Knoxville History Project at Maple Hall, Booker spoke about the Knoxville riot and the events leading up to it.

The local story began in the predawn hours of August 30, 1919. Bertie Lindsey and cousin Ora Smyth were asleep in the front bedroom of their small home on Eighth Avenue. Around 2 a.m., an intruder broke into the screened rear porch of the home and entered the back door, which Lindsey had left propped open overnight. Smyth, sharing the bed with her cousin, awoke to the sight of a shadowy, pistol-wielding man threatening Lindsey to lie still. Instead Lindsey stood, pleading for her life. The intruder ordered her back down, but as Lindsey attempted to push past him, the man fired the fatal shot. She fell. He fled. Smyth summoned help from the next-door neighbor, policeman Emmett Dyer.

Smyth described the intruder as a black male. Knowing the victim was white, one officer on the scene suspected Maurice Mays, a local businessman and onetime police deputy known for his flings with white women. Later court testimony revealed that the accusing officer had a personal vendetta, and pursued Mays as a suspect despite the lack of evidence.

Officers arrested Mays at his house at 313 Humes Street (the address no longer exists) and drove him to Eighth Avenue, where they stood Mays under a streetlight at the corner of Gillespie Street to await the eyewitness. They summoned Smyth, who supposedly had glimpsed the attacker’s face in his flashlight beam. Although clearly distraught and in little condition to make a positive ID, Smyth quickly fingered Mays as the intruder and was led away.

Police had their scapegoat. As word spread that morning, people began to gather in the city center. Officials anticipated mob violence and moved Mays from the city jail on Commerce to the county jail on Hill Avenue. Around noon, hearing of a swelling crowd on Market Square, deputies quickly dressed Mays as a woman, drove him to Concord, and sent him by train to Chattanooga.

That evening a group of about five thousand whites marched up Market Street to the county jail, believing Mays to be still inside. When they were refused admittance, they dynamited their way in and raided the jail, including its stash of impounded liquor. National Guardsmen arrived but could not control the mob.

Hearing that a group of armed blacks had assembled at the other end of town, the white mob headed north on Gay Street. Stores along the way were looted for firearms and ammunition. The first shots were fired around 11:30 p.m., near the intersection of Vine and Central—which Booker calls “the heart of the black business community.”

What followed was a drawn-out battle using guns and any available hand-held weapons. The Guardsmen, summoned to quell the riot, set up two machine guns at Vine and State and joined the whites against the blacks. Through the early morning hours of August 31, and more sporadically throughout the day, fighting continued—despite it being a Sunday. The violence subsided only after an official curfew took effect that night.

The chaos that played out on Knoxville streets can’t be blamed on a few vengeful extremists. It was part of a wider problem in 1919. Between spring and autumn of that year, dozens of race riots erupted in cities across the nation. They occurred in Alabama, Arkansas, Florida, Georgia, Kentucky, Mississippi, Louisiana, South Carolina, Tennessee, Virginia, and Washington, D.C. They happened in places outside the Southeast: Arizona, California, Delaware, Connecticut, Illinois, Nebraska, and Texas. Those turbulent months became known as the “Red Summer.”

“There were a lot of black men coming home from World War I, many with different attitudes,” Booker says. After fighting as equals with whites on the battlefields of Europe, many black veterans understandably scoffed at having to fit back into Jim Crow expectations in their hometowns. “Many of these men were saying, ‘I’m not going to take this anymore,’” Booker says. “That had a lot to do with it.”

But Booker believes what happened in Knoxville was somewhat different, and stops short of calling the local incident a full-fledged “race riot.” He says that there were comparatively few lives lost here. “In most of the other cities there was real bloodshed. I wouldn’t call what happened here particularly vicious,” Booker says, noting that the official death count was only two. “It wasn’t building up here; it was more spur-of-the-moment. A lot of it was fueled by alcohol.”

Still, racial tension lingered. Hard feelings lingered, too, even after segregation ended here. Historian Jack Neely, director of the Knoxville History Project, once interviewed a man who was 13 at the time of the riot. After all those years the man still held a grudge against a Guardsman who, for no reason except that the young man was black, frisked him and stole the contents of his pockets.

Although Knoxville had a long way to go in improving race relations, Booker believes our city healed quickly from the incident: “We were almost back to normal a few years after the riot.”

Maurice Mays had pleaded innocent from the time of his arrest. But his reputation as a playboy worked against him. Respected members of the black community—including James Beck, director of the NAACP in Knoxville, and businessman Cal Johnson—refused to contribute to Mays’s defense fund.

The trial jury found Mays guilty, and he went to the electric chair in March 1922. During the past two decades, three Tennessee governors—most recently Gov. Bill Haslam—rejected petitions to exonerate Mays.

Today, a stroll through downtown reveals that most of the key buildings associated with the riot no longer exist. Writer Laura Still, of Knoxville Walking Tours, says that bullet holes could once be pointed out on Old City buildings, and that local residents attempted to preserve them as reminders of the riot. But any lingering battle scars have since disappeared. Still remembers a building on Jackson Avenue that had bullet holes in it until a new owner—perhaps not knowing the history of the marks—covered them up.

The 100-year-old story continues to be told. Some of it may be urban legend, like the tale Booker heard of bones from the riot being unearthed when land was cleared for the City-County Building—site of the old county jail on Hill Avenue.

But some accounts are more reliable, based on primary sources. In 2001 Booker published The Heat of a Red Summer, which is available for purchase through the Beck Cultural Exchange Center on Dandridge Avenue. Since his days as a Metro Pulse columnist, Neely has published several pieces about the riot. The subject appears in Neely’s books Market Square and Historic Knoxville, a new guidebook that provides fascinating details about the city’s streets, buildings, neighborhoods, parks, and cemeteries. Laura Still also includes the story, with a supernatural twist, in her own book, A Haunted History of Knoxville.

Next month you can watch the drama unfold from the safety of a theater seat. As part of its 50th season, The Carpetbag Theatre—“the longest-running black theater in the United States,” will present an original play about the riot, Red Summer, by Linda Parris-Bailey. Performances run September 12-15 at the Bijou Theatre.