“Million Dollar Quartet” Conjures the Heart of Rock and Roll 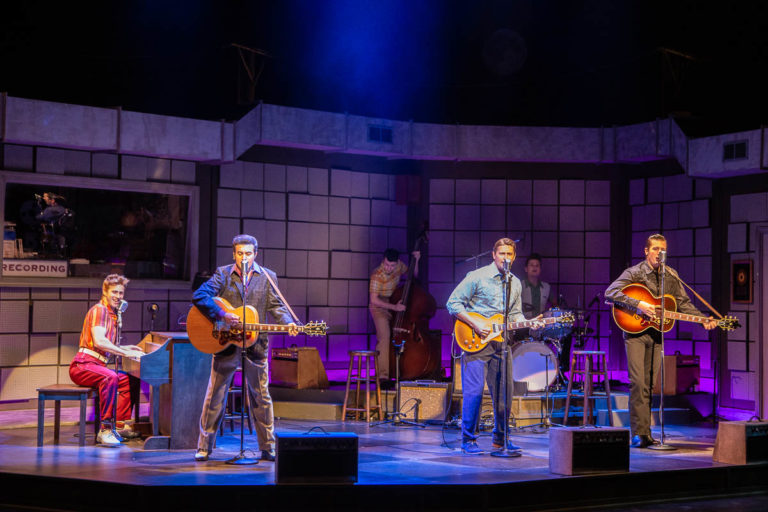 I’ve been waiting for this production since last year when it was announced. On December 4, 1956, a magical gathering, orchestrated by Sun Records owner Sam Phillips, came together for one of modern music’s most captivating moments. Gathered in the same room that afternoon and early evening, stars Carl Perkins, Elvis Presley and Johnny Cash joined Jerry Lee Lewis, whose first recording would be released a few days later.

The engineer realized the significance and started rolling tape. A reporter from a Memphis newspaper was called to document the event and released an article the next day with the caption, “Million Dollar Quartet,” and an iconic photograph showing Elvis at the piano flanked by the others. Elvis’ female companion for the night was seated on the piano, but cropped out of the published photograph.

The recording, possibly complicated by the fact that Elvis’ contract had recently been purchased by RCA records, didn’t surface until about fifteen years later. Additional tracks were subsequently unearthed and a complete package was eventually released with notes co-written by Colin Escott. Escott, a music critic, is now well known for a collection of books about a range of musicians.

Escott ultimately co-wrote a musical based on that evening in 1956 called, appropriately enough, “Million Dollar Quartet.” It initially played outside New York, but eventually found its way to Broadway where it was nominated for three Tony Awards, including Best Musical. Levi Kreis won the musical’s sole award, taking the Tony for Best Featured Actor in a Musical for his portrayal of Jerry Lee Lewis.

The cast that brings the musical to Clarence Brown Theatre includes Levi Kreis, though he is now in the role of Sam Phillips. This is Kavan Hashemian’s ninth production as Elvis in the musical. He is internationally known for his Elvis impersonation and performances, with the BBC proclaiming him, “The World’s #1 Rock N Roll Elvis,” in a televised competition. Peter Oyloe (Johnny Cash) toured nationally with the musical.

The musical centers on that one evening and is staged entirely on a set of the interior of Sun Studios. Through the use of flashbacks, context and history are fleshed out to underscore the sequences of events that lead to the gathering. The music represents the various artists’ early catalogs, though not all the music staged was actually performed that night. For the audience, the music offers a stroll through some of rock music’s strongest early recordings.

The cast, the music and the significance of the moment, make for a fast-paced, exuberant experience. The performance is ninety minutes without an intermission. The show opens tonight, but that performance and the one for tomorrow night are sold out. The official opening is Friday night and tickets are available for that and other performances. Tickets are certain to be sold out most nights. Tickets may be purchased here.