Simpl Opens Wednesday at 1120 Sevier Avenue on the South Side 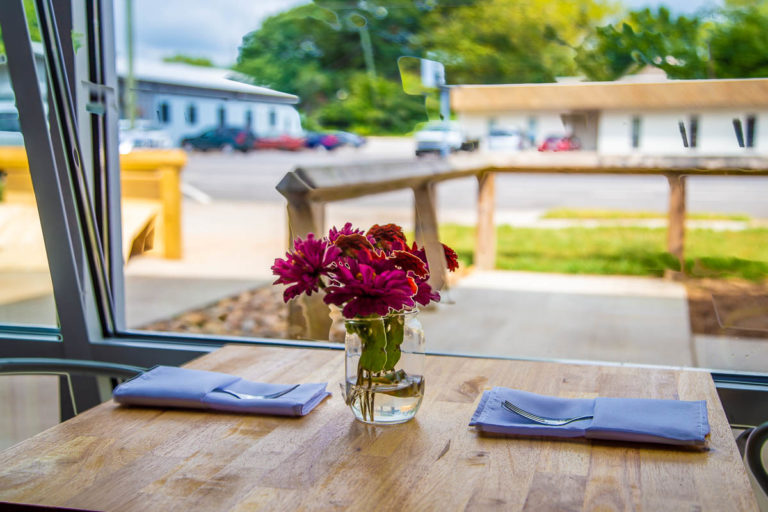 It’s been a journey. The opening was to have been in early spring before a series of twists and turns and unexpected delays. They’ve endured the same kinds of struggles all businesses, particularly restaurants, experience when trying to open. It all comes to a happy ending with the official opening tomorrow of Simpl on Sevier Avenue in South Knoxville and the grand opening in early September.

They’ve had a couple of soft openings, including brunch that Urban Woman and I enjoyed last weekend. Chef and owner Kendale Ball has been working on getting systems up and running and training employees. Not everything is finished: the liquor license hasn’t come through, yet, so wine and cocktails will have to wait a minute.

It’s taken a lot of time to source food and take care of other details. The entire electrical system had to be ripped out and re-done from scratch. The grease trap installation took longer than expected and required a crane. Details related to codes and inspections added up. Kendale used the time to try out different concepts and recipes. He’s also catered events like the charity event last week at Relix Theatre for 120 people.

The interior is simple and beautiful, with flowers on butcher block. Tables and a bar were built from the same butcher block by Clint Smith and Ryan McMillan, who also built the shelving. There is currently seating for sixty, with more outdoor space planned. Kendale plans to have raised garden beds outside and a beer garden, eventually. Erica Chidester produced the original art specifically for Simpl. Z Creative Group is responsible for the interior design.

Training is underway for the craft cocktail program that is headed by Bar Manager Ryan Riddell. Domestic beers are available, but there will be no taps as Kendale feels there is so much good beer in the area, including next door at Alliance Brewing, that he doesn’t need to fill that niche. Customers are welcome to bring an Alliance beer to their meal at Simpl. The wine program will be comprised of organic and biodynamic wines.

The food will be locally and regionally sourced as much as possible. Kendale estimates that about 75% of the vegetables he uses are locally grown. He took delivery of Benton’s Bacon while we talked and rattled off a list of farmers and farms he’s using: Foraged Farms Produce (grown in the Old City Gardens and provided plants, herbs and flowers decorating the restaurant), beef and pork from Lick Skillet Farm, produce from Two Chicks and a Farmer, bread from Paysan, lamb from Hoodley Creek. He’s also using Bales Farm and says he is always looking for more suppliers. He’s currently in search of a supplier for duck and duck eggs.

The menu will include “southern tapas and I will always have vegetarian and vegan options available,” says Kendale, who notes that while growing up his family didn’t have meat with every meal and he enjoys a good plate of vegetables. He says he’s happy in the kitchen and he really enjoys working with vegetables. It comes through in his dishes. I love okra and I love grits, but I never considered them together. It works.