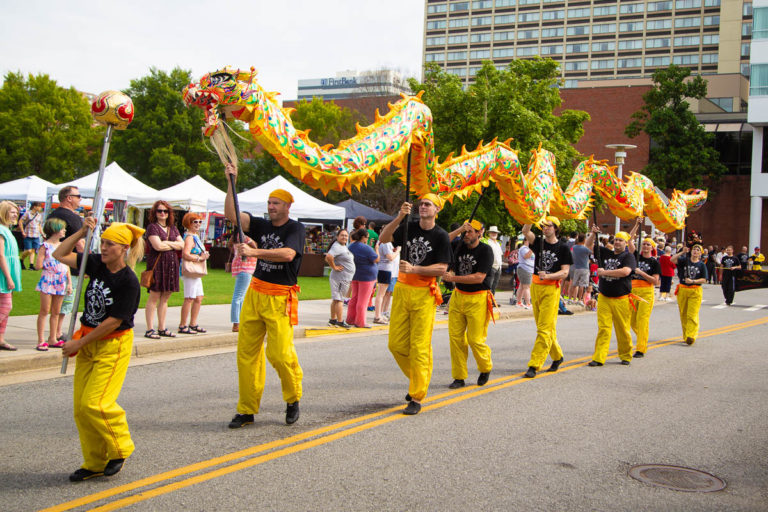 It’s hard to imagine that a very few years ago, the Asian Festival was held in Krutch Park Extension. And it had plenty of space. The festival has exploded in popularity, growing with each subsequent year. First taking all of Krutch Park, then adding Market Square, it eventually outgrew the larger footprint of surrounding streets. This year marked the first for the festival to be held on the World’s Fair Park.

Any doubts that it was ready for the larger stage were erased immediately. Officially starting at 11:00 am, the parade opening the festival got underway at 10:45 and the crowds were already building. By noon, it was clear that the 40,000 estimated attendance from last year would almost certainly be eclipsed. Very few events dare to take both the south and north lawns, as well as the amphitheater. It’s expensive and the risk of dispersed crowds seeming small is significant. This festival took it all and filled it up.

The parade is a great way to start the festival, as it introduces the countries involved and serves as an overview of what to expect. The colorful costumes, beautiful children and beaming adults displays the pride each contingent takes in their heritage. For many of us, it is a reminder that “Asian” covers many cultures and peoples.

Urban Girl was my primary partner for the event. She’s a big fan of Asian and, particularly, Japanese culture. We had fun looking through the booths, as she served as my cultural guide through a pop cultural world of which I know very little. Lazy eggs, anyone? Apparently, it is a cultural icon. I skillfully avoided making a $40 purchase on that one.

We picked up some of her favorite Japanese snacks. We had to stop into a couple of Henna spots and collected a leg tattoo and a hand tattoo. We made our way past the tea ceremony to the south lawn where the food vendors were spread out in a wonderful array. Wonderful both because of the food offered and the fact that there were enough of them and they were well-spaced enough that the nightmare of securing food in previous years, gave way to short waits and great selections.

This was my first event on the newly refurbished south lawn. Much of the focus on improvements for the lawn involved drainage, which has always been a problem. There was no issue with drainage on this day, but the new pavers circling the lawn were great for navigating food vendors and crowd damage to the lawn had to be minimal because of the hard surfaces. Food vendors also had access to electricity without generators, making the experience much more pleasant for everyone.

This year’s weather was a great gift given the potential for unrelenting heat in Knoxville this time of year. The new location also provided relief should there be rain or oppressive heat. The largest stage was inside the amphitheater with its recently upgraded seating. To be able to sit to eat (there were also chairs and tables in a covered tent on the south lawn) makes a huge difference. To do so in a covered space is priceless.

We watched the entertainment in the amphitheater while enjoying our food, a comfortable chair and shelter. We could not have been happier. The entertainment suffered in past years from a small viewing area with very few seats and total exposure to the heat. It was one of several aspects of the new location that made for a much more pleasant experience.

As a downtown resident, I have to add another note: It felt nice to have the festival to attend and still be able to move about my neighborhood. Festivals are wonderful, but for downtown residents, they do impact our ability to come and go from our homes and this little bit of distance feels just a bit better. Perhaps this is the future. Indiafest will be held on the World’s Fair Park September 21st.