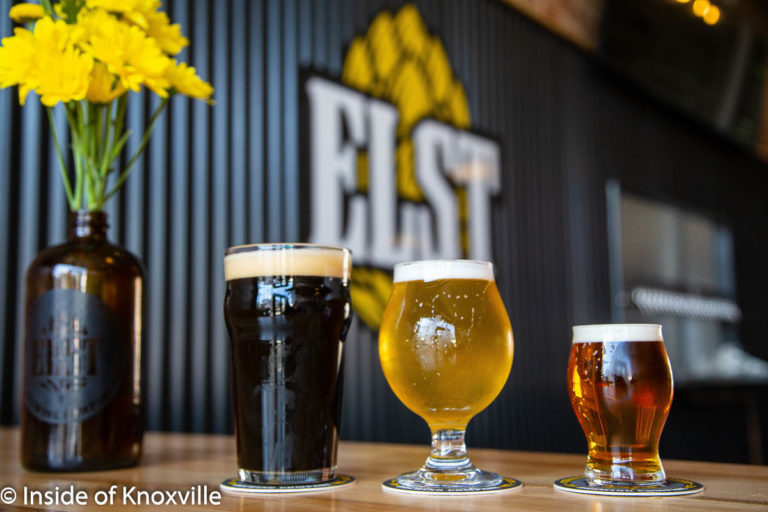 Last October, Elst Brewing Company opened at 2419 North Central bringing their version of local craft beer just beyond Happy Holler out from downtown. Last week, after nine months of work, they opened Elstwhere Tasting Room to the public. Early reception has been strong, but that might be expected as people have been enjoying their beer at various locations on Central, downtown and in south and west Knoxville since last year.

Matt Turner (who you may know from his time at Tomato Head, or as a current co-owner at Steamboat Sandwiches) has been hired as bar manager. Seating has been set around 90 and more seating will be added as picnic tables are being brought for the rear patio. The group joined forces with Oakwood BBQ Truck last Wednesday night and that looks to be a winning combination that will be repeated Sundays and maybe Tuesdays going forward.

The tasting room features twenty taps, ten of which are currently filled with Elst beers. Two have already been emptied. Plans call for having only their beers and introducing new brews as they come available. Some beers will be “taproom exclusives,” meaning they can only be found at Elst and when they are gone, they are gone. Those two currently include the Spiced American Wheat and the Double Down DIPA. Rumor has it that this weekend will see the advent of a Keylime Pie Flavored Ale.

The intention from the beginning was for the tasting room to serve as a comfortable gathering spot for the Oakwood/Lincoln Park neighborhoods, as well as attracting craft beer lovers from all around. Shane Todd said that feeling was definitely present last week as “neighbors ran into neighbors when they hadn’t planned to meet” in the tasting room.

The tasting room features bright yellows in multiple directions in the seating, accent paints, logo and flowers. There is also a small raised area at the back of the room which may serve any of a number of purposes. Shane suggested it might simply be a cozy area for soft seating or it could be used as a stage for comedy or acoustic music.

Steamboat will soon be extending their weekend hours to more closely align with Elst so sandwiches are readily available. Once the picnic tables are available out back (the patio will eventually be a beer garden), guests may enjoy that space with food and drink from both locations. Chris Hall and Todd said they are happy for patrons to bring in food from Steamboat, Nora Pizzeria just down the street or anywhere else they so choose.

There is also a small space adjacent to the tasting room, which is available for private events. Details are still being worked out, but contact information if you are interested may be found on the Elst Brewing Company website.

Expect a Grand Opening event the first weekend in August, but Elstwhere is open for business now and operating at its full schedule, which is 3:00 PM to 9:00 PM Monday through Wednesday, Noon to 10:00 PM Thursday through Saturday and Noon to 8:00 PM on Sunday. They said they will be sensitive to their guests and if a crowd is present at closing time, they will extend hours, but they want to be sensitive to the neighborhood.

Give them a “like” on their FB page (they need 186 to reach 1000) and get by, meet everybody, have a beer and support this fine new local business.