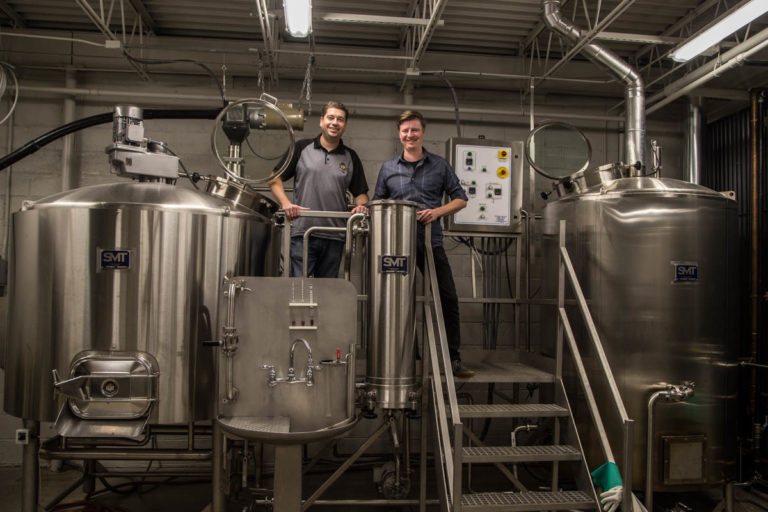 It’s located north Knoxville, one of the booming areas around downtown. Elst Brewing Company, at 2417 North Central Street joins Loch and Key Productions and Steamboat Sandwiches, both of which I’ve recently profiled, in an adjoined building that is serving as an anchor in the area’s emerging new development.

The new company is the product of four partners, Chris Hall, Shane Todd, Chris Sexton and Head Brewer, Dan Leonard. The four wound up neighbors and, as they shared common interests, craft beer and brewing emerged as a dominant theme. Chris Hall and Dan also worked together at Scripps, so they knew each other before becoming neighbors.

The group had some experience and background that lent itself to the new enterprise: Chris Sexton, while working full time as an engineer in New Mexico, had been asked to head brewing operations at a brew pub and had done so. Dan had been home-brewing for over a decade and pulled Chris Hall into it.

After talking in vague terms for several years about the “dream” of opening a brewery, the group grew serious and decided they would pursue it. A first step was Dan’s decision to complete beer school at South College. The three became four when Chris Sexton moved into the neighborhood with his background experience. He was the missing piece and the plan was set in motion.

The company was formalized as an LLC in early 2016 and the group began the long search for a building. They considered leasing, but didn’t feel comfortable with that. Looking to purchase a building, they quickly zeroed in on the North Central area because it is growing, but still affordable. While searching for a building, they also traveled to regional breweries learning more about setting up a business and a space.

They’d talked to John Sanders about another building when this one (which is really a row of buildings) came on the radar. John already owned the portion of the building where Steamboat has resurrected. The largest section of the building was owned and occupied by Tennessee Roofing Company. A deal was struck in which Loch and Key purchased their section, Elst purchased their section and John purchased a section that will be leased to Elst. The purchase was finalized in June 2017.

The size was a perfect fit and the layout also met their needs. They began work on several fronts, working with the city, who they say has been very supportive, to get the necessary approvals and inspections. A facade grant was awarded and the new facade, which is pictured here in a rendering, will move that section of the building further back from the sidewalk to its original position.

Sanders Pace Architecture did the architectural work, with Cameron Boling as architect of record. Cameron lives nearby, so Chris and Todd said, he took special pride in doing it well for his neighborhood. Holston Construction Services did the build-out.

The group wanted a unique name for the brewery and after long discussions, conversations and google searches, settled on Elst, which in middle English, had the same roots as the word “sanctuary.” They liked the idea of their beer being a sanctuary from the every day world. They also enjoyed the various puns and plays they could make on the word and their tasting room will be named “Elstwhere.” 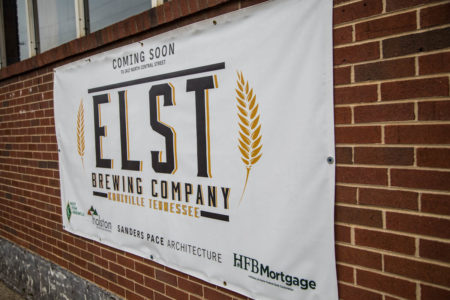 The final certificate of occupancy was awarded a few weeks ago and production started in September. They are producing a range of beers with an eye toward big flavor brews. They are making IPAs, a Vanilla Milkshake Ale and also Belgian Style beers, the latter of which is their personal favorite.

They are using an “Inverted tracking process,” or as Shane puts it, “from grain to glass.” They grind their own grain, feeling it’s fresher that way and use a process called, “step mashing.” The equipment they use was custom-made to match the process they wanted to use.

Long term plans include some bottling and canning. They want to have product that customers in the tasting room can take home, if they like. They sized the production side to be able to ramp up production as demand from distribution increases. They hope to have small batch bottles and sixteen ounce cans available in the near future.

In the meantime, look for their beer to begin appearing at a craft beer watering hole near you and you can follow their progress on their Facebook Page (Give them a Like!), as well as their website.