Loch and Key Productions: Taking the Next Leap 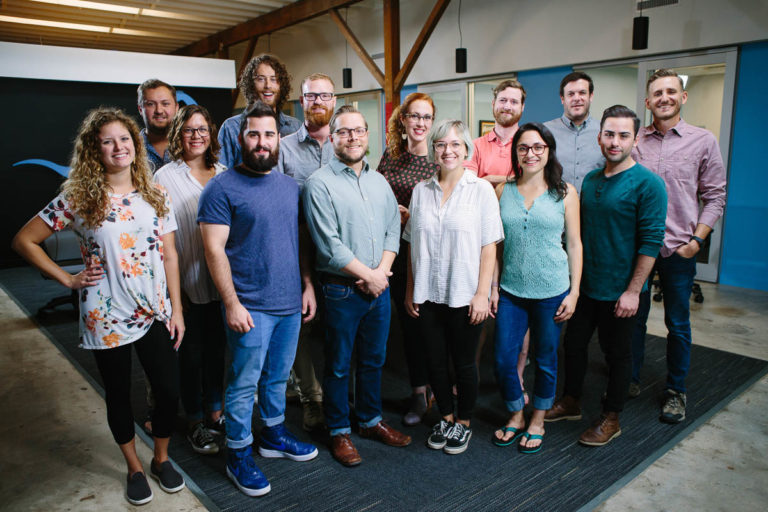 I recently visited the new home of Loch and Key Productions at 2411 North Central Street and enjoyed a wide-ranging conversation with owners Andy Feliu and Eli Hechmer and Lauren Fyfe, Producer and Director of Client Services. The trio laid out the long journey from a new company in 2011 which might or might not turn into a full-time job into a major video production company making its mark in Knoxville and beyond.

If there was a theme to the conversation, it was that Andy and Eli consider the company’s success a factor of the strength and involvement of their team. In the early days, the two of them weren’t sure there would ever be a team, but slowly they’ve grown (Lauren was their second hire) and they are very proud that everyone has a voice and that outside one person who got an excellent offer elsewhere, they have retained every employee they’ve hired.

Andy grew up in a suburb of Chicago, but his mom and step-dad lived in Kingsport and he visited them there. When it was time for college, he chose UT where he majored in journalism. He did freelance work for a while before arriving at the ill-fated Knox Ivi, which some readers may remember was located on Market Square for a time.

Eli grew up in Sneedville and also attended UT, studying journalism and electronic media. His first full time job was with a group called Cherry’s Internet Cafe which didn’t succeed, but the same group emerged under the name Knox Ivi. It was there, you might guess, that the two met and formed a friendship and a professional relationship.

They drew some lessons from their time with the company, which they’ve taken into their own venture. They left that company with a strong sense that employees should be treated well and listened to, which wasn’t always the case there. Andy said, “We want our employees to be happy. They’ll do better work.” The two started doing freelance work together before the company folded.

Eli says they were frustrated at seeing, “what could be done at a higher level if we had the right equipment and support.” They shot the Ice Bears’ games for free and ultimately turned them into their first client. They added some work at Maryville College. In 2011, they founded Loch and Key with a small group which quickly became two people and stayed that way for the first three years.

It was a struggle for a long time. They started live streaming, used interns, and those games were really important because it offered the only stable income at the time. The charge was meager compared to what they command today, but it was important. Still, the stress and effort early on was enormous. They took everything they could get.

They also developed a relationship with AC Entertainment and shot Sundown in the City for free for a couple of years. As is often the case when young businesses build good will, that led to a great relationship which eventually did pay. The group now shoots AC Entertainment festivals from the Bonnaroo, High Water and Moon River Festivals to Forecastle which they just shot for the seventh year.

A significant turning point was when they secured a contract with Covenant Health for internal video work. The initial meeting didn’t seem to be going well until they made the impromptu decision to show them video from their festivals. It began a great relationship with the company which continues today. They’ve now secured contracts with other major companies from Ripley’s to Discovery Networks and providing digital content for HGTV. They credit early luck and also over-delivering on every job they completed.

In recent years, the range of services has expanded to include some marketing elements. They help clients flesh-out what they are after and make sure it is targeted toward a purpose. They help from the creative process through production and post-production. Andy said, “We invest a lot in them and we support each other.” They also do photography and have a team working on social media content and recap videos.

With any of their clients, or festivals, they “try to create a unique look and style for that event.” They see themselves as an extension of the marketing team for the events. “We share ideas and make each other better.” They look at what makes each company, campaign or festival different. Andy says, “It becomes an art at that point.”

From the beginning they have been excited by the work. Andy said, “We have the coolest job imaginable.” The early question was, “Can we keep getting people to give us money to do what we love? We put good will out there and tried to do good for the community.” The answer continues to be in the affirmative. And they continue to shoot for good will, helping Second Bell, WDVX, the YWCA and Waynestock, to name a few.

While the large companies have been great contracts financially, they also enjoy working with smaller businesses, trying to help them maximize what they can get for their budgets. “It matters to us whether their videos are successful and does for them what they need them to do.” Lauren added, “We like to be able to help small businesses.” She referenced the conversations she’d had with potential start-ups at the recent Maker’s conference.

One exciting series of projects recently has been with the Discovery Network’s Easy Does It and Way to Grow series. Working with the digital side, they typically spend two-to-three days shooting ten-to-twelve videos at once. It’s been very rewarding to see the response. The first video released for those series had more views by the end of the first day than all the rest they had ever produced added together. Those videos are available on Youtube.

The recent move was critical to allow the company to continue to grow. At Southeastern Glass, a place they loved, they had twelve people working in a 950 square foot area. Editors had to give up offices. Lauren took phone calls in the hallway. The long journey to find the new space got a big assist from John Sanders and Sanders Pace Architecture.

John helped them find the building where they are currently located and brokered a deal with several parties which allowed Loch and Key to purchase their portion of the building from the Tennessee Roofing Company. John had invested in the area, which gave them confidence and they love their neighbors in the building. Lauren said, “We love that the building is all of a piece.”

Daniel Jones was the lead architect working on the design for Sanders Pace and Brownlee did the build-out. Their square-footage grew from 950 to about 6500. It’s allowed for two conference rooms, six editing bays, management offices, room for interns and a warehouse.

They are excited about being able to use the new space for upcoming projects and to continue to support ongoing clients. They are currently developing a new website to better reflect their brand which is increasingly tourism, lifestyle and healthcare. They also are working with a range of educational institutions, including UT, Lincoln Memorial and South College.

“We wanted to make things from beginning to end. People on the team do the pre-production and then are present for the shoot and involved in post-production. 95% of the work is done in-house and people stay fresh by changing roles.”

The history of the company is a series of moments where they took leaps of faith and each leap has been rewarded. Whether it was committing to renting space at Southeastern Glass or hiring their first employee to the purchase of their new building, each step has felt right. Eli pointed out that they always “hired people who make us look better. The new place is a thank-you to our employees. A place they can enjoy.”