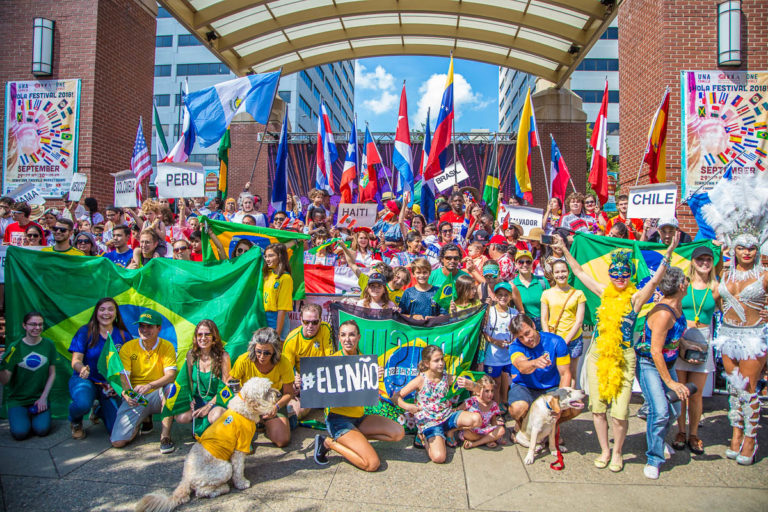 I’m pretty sure I’ve never reported on an Hola Festival this far after the event itself. Modern attention spans being what they are, people have moved on. Still, I think the event is worth documenting each year as it is one our most colorful and joyful events.

It starts on Saturday night, and that’s an important point to mention, as many people come into it on Sunday, not realizing what they missed the night before. What they missed was great music from Jimmy Bonilla and his Orchestra Sound Check, among others.

And dancing. Saturday night is definitely dance night, as hundreds of people dance, sometimes in sync, sometimes not but dance they do, and beautifully, at that. From children to adults, couples swaying sensuously to a free-for-all dance line. Everyone has fun.

For us, the festival starts on Sunday with Soul Sacrifice, one of the finest bands around. That they are covering the Santana oeuvre, is a bonus. The pitch perfect notes of Santana’s music floating over a buzzing Market Square while the smells of Latin American cuisine waft with every breeze that blows is about as good as Knoxville’s center city gets. As they conclude, we gather our food from the various vendors and slip back home to enjoy our dinner there.

The parade is a focal point of the festival and I have to say, it’s also sometimes difficult. The route taken sometimes makes for difficult viewing and this year, more so than others, the representatives of the various countries bunched together so much that photographs were excruciatingly difficult and simple viewing of each group near impossible. If the groups would simply maintain twenty feet or so between each other, it would be so much better.

Of course, as the delegations are announced from the stage and cheers erupt from the various constituencies, it’s a highlight. The gathering on the stage produces one of the most beautiful shots of the festival year with the colors and banners all grouped for one brilliant moment.

It’s always been one of my favorite festivals and it remains so. Given some of the national rhetoric around our Latin American neighbors, perhaps it is more important than ever.