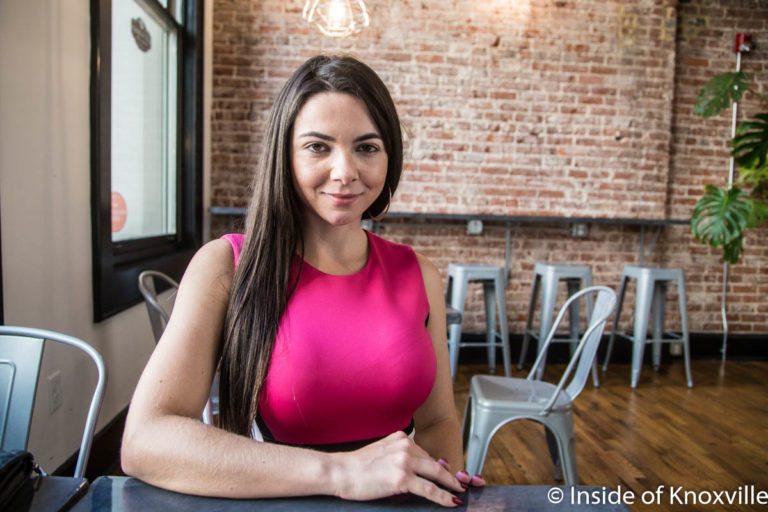 People pitch me stories at a pretty steady pace. Sometimes it’s just not a good fit, or there is simply too much happening to fit it in. It’s not unusual, however, for a friend or reader to point me in the direction of something that might have a broader interest to readers. I recently got such a message from Barbara Curran.

Via the Inside of Knoxville FB page, she wrote:

Hi , I am from Brazil and most of my friends are foreigners and we love Knoxville, I wrote a blog about , maybe you could post on your page ? Every year more and more foreigner are coming to Knox it’s our paradise.

I read her blog and became more curious. After some conversation, she agreed to meet me for an interview. It was eye-opening from the outset, hearing both her descriptions of life in Brazil and her perceptions of Knoxville. She also has a mission, but more of that later.

“Brazil is very dangerous, but very beautiful. Seventy percent of the population is in poverty and lack education and jobs.” She explained that, though she is married, she can’t get used to wearing a wedding ring, because in Brazil she would fear her finger would be cut off to steal it. Just walking down the street openly brandishing a cell phone makes her happy, as that is not possible in Brazil: children would steal it.

She explained that as many Brazilians as possible move from the country, many of them coming here. There are two principal ways they can move here for a long-term. One is to get an investment visa. This requires a $500,000 payment, so it is limited to a very few. More commonly, Brazilians arrive in California or cities like Miami, Orlando and others with a work visa. That was her pathway when the time came.

Growing up poor in Brazil, the fact that she is here is something of a small miracle. Determined to attend college, she took the government’s offer to “volunteer” on the weekends, Saturday and Sunday teaching classes for the poor, whether English or life skills in exchange for tuition to college. It’s a government program in Sao Paulo designed to lift young people out of poverty, by helping them obtain a liberal arts degree. Her degree is in Portuguese and English.

As she worked her way through college she began searching for a way out of her native country. She found it in the form of paying for a work visa by selling her car she’d worked to buy. The cost was about $1250 which compares just about precisely to the minimum wage in the country of $1300 per month. She knew her degree would not be accepted in the US and she would have to work an unskilled job or redo her degree.

She got a job as an au pair through an agency and came to the states with the intention of learning English, saving money and returning to teach in Brazil. Her first assignment was with a couple in California, but when the mother lost her job, Barbara was reassigned to a family in Knoxville and fell in love with the city – and with Mark.

When that job ended, she was sent to New Jersey, then to North Carolina with a family who she felt were abusive. She ran when she got the chance and the family called immigration because, without a job, she was an illegal immigrant. She called Mark and told him she would come to Knoxville to say “goodbye,” before leaving for Brazil. Mark, who works at Knoxville Bookkeeping and Tax Service, had a different plan, suggesting they get married and she accepted.

Still not in the clear, she had to travel to Memphis to get her status changed to a green card. She was met with suspicion with the authorities there implying her marriage was simply to avoid deportation. She wasn’t sure she’d get the green card, but after a two week wait, it arrived in the mail. She has since obtained her real estate license and works for Exit Real Estate.

She sees Knoxville as something of a paradise (with the exception of the limited public transportation). The low cost of living, relative safety, good schools (compared to the state of schools in Brazil), the seasons and the relative organization of society all appeal to her – as well as the fact that she finds people here much nicer. She also thinks it will appeal to a broader set of Brazilians.

The structure of society is a big thing for her. She described the “Brazilian Way,” as a phrase to describe a society in which people are habitually late and disorganization is rampant. While they have “more holidays and vacation than anywhere else in the world,” (It is actually near the top, with 34 potential annual days required off, compared to 0 in the U.S.) the roads are falling apart and few people can afford a car. Travel is dangerous. Real Estate is not a career there as the property is in the hands of a few and changes hands in private exchanges. She says it is a “beautiful mess.”

The Brazilian population in Knoxville is increasing fairly rapidly and it’s her mission to use her real estate career to further that growth. She is saving to bring her family here, but also has plans to promote real estate here to Brazilians who have already moved to larger U.S. cities. When she moved here in 2015, she estimates there were around 100 Knoxvillians from Brazil. Now, she estimates that number to be closer to 500.

The conversation was a good reminder of the great things we easily take for granted both in our country and in our city. She feels she has found a home she will never leave and is excited to help grow its economy and to bring others here who will do the same. “I miss Brazil every day, but I will never move back.” She feels she’s found paradise. Here is that original blog post, “Five Reasons Why Foreigners Love Knoxville,” that she reached out to share. Read it and welcome a fellow citizen with a background that may just be a little different from most.