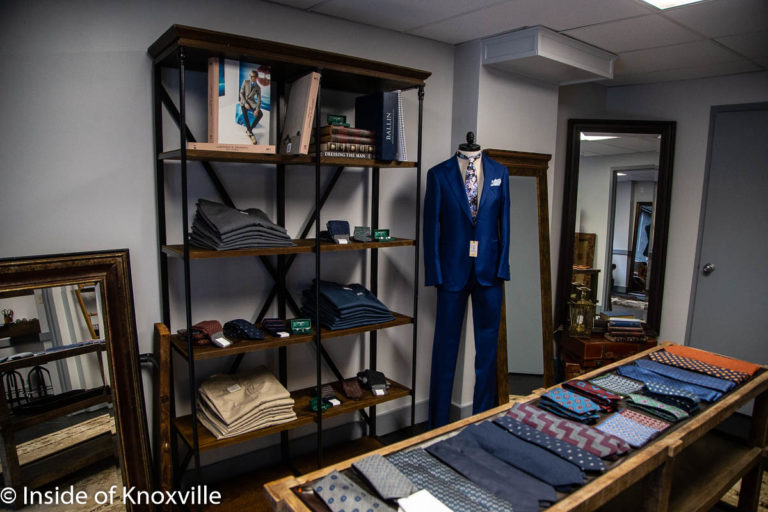 Parker (William) Davis and Bryce Wylie have opened William and Wylie Custom Men’s Clothing store at 211 Clinch Avenue, just down the hill from the Hyatt Place Hotel. It helps fill a retail void often mentioned in discussion on this blog. They feel downtown is the perfect spot for their business and are excited to join the downtown community of businesses.

Parker is from Greensboro, North Carolina, but moved to Knoxville in 2007 with his family. At sixteen he walked into Coachman Clothiers to shop and told the workers there he was leaving his job at a pizza shop. They encouraged him to apply there. He soon started to work and fell in love with Southern Tide clothing. He soon grew to love custom shirts and bought a custom tux to his senior prom.

He attended UT where he expanded his knowledge base with a major in supply chain, a retail minor and a collateral focus on entrepreneurship. It was a combination that would prove to be fortuitous as he learned just before graduation that Coachman was closing. Bryce suggested they open a store of their own.

Bryce lived here as a child in the 80s, but his family moved away until it was time for his military father to retire. He brought the family back to Knoxville in 1992 and Bryce graduated from Central High School in 1994. In 2000, he got a degree from ETSU after studying criminal justice and human resource management.

He was drawn to a career in retail clothing and from 2001 to 2006 he managed Dillard’s stores in Atlanta, Nashville and Knoxville. He worked for Brooks Brothers for five years, followed by eight years at Coachman. Now he is interested in working a small shop with unique brands where the overhead is low enough that he can simply focus on giving his patrons high-quality service.

From the outset the two wanted a small place and even considered operating without a store front. Their custom fittings are often done at patron’s homes or offices, so it was possible, but they ultimately decided they wanted a very small space — 600 to 800 square feet — with just enough room for a small amount of merchandise, samples and a fitting room. They considered locations around the city, particularly the Bearden area, but ultimately decided on downtown. Parker lives downtown and was a fan of opening the business here from the outset.

Their model isn’t based on walk-in traffic as much as word of mouth and destination shoppers. They’ve already connected with prior customers who have driven to the new location. There are thirty minute parking spaces in front of the business and a parking garage around the corner. Bryce pointed out, “If they want custom, they will drive.” They also hope to develop a customer base of downtown residents and workers.

They began doing business as William and Wylie earlier this year and have already seen significant business. Weddings are a significant part of that business as Bryce says, “People are trending toward purchasing suits and tuxes, rather than renting.”

They will deliver downtown or come to the customer to do custom fittings. They are also offering alterations and may introduce a line of shoes at a later time. Bryce said, “We’ll have the lines that will make us successful and we’ll respond to what customers want.” He said they intend to be a part of downtown for years to come.

The shop isn’t yet finished and they are in a somewhat soft-opening mode. Lighting is coming, as well as more stock and signage once approved by the city. They will be replacing the blinds and hope to have art on the walls, soon. The target is for an August grand opening and, perhaps, a First Friday event the same month.

The address is 211 Clinch Avenue and the phone number is 865-690-5895. They are open 11:00 AM – 5:00 PM and are available other hours by appointment. They said they’d love for people to drop in just to say “hello,” whether or not they make a purchase. Stop in and check out downtown’s first dedicated men’s shop in a very long time.