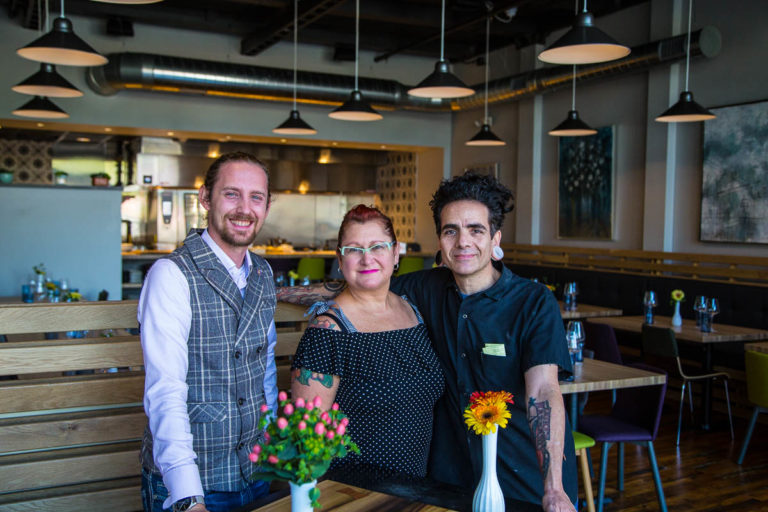 It seems like a long time, but it’s only been seven months since I first wrote about Rebel Kitchen. It’s taken that long, says Chef Paul Sellas, because owner Thomas Boyd and the rest of the team wanted it right when it opened. The fact that they tried to keep the Old City Wine Bar open until it became absolutely necessary to close for a few weeks slowed things down a bit as they installed a full kitchen while continuing to serve food.

They think the time has come. This week will be soft-opening nights devoted to service workers, friends and family and media. Monday night will mark the official opening to the public.

The space, as you might expect, given the beautiful Old City Wine Bar, and the fact that the new restaurant was designed by DIA, is attractive in every direction. Much of the wood work, from the host stand to the cheese boards were crafted by local woodworker Bentley Bracket of Elemental Design. Seth Rowlette built the tables, shelves, booths and bar. The dishes were handcrafted at Mighty Mud Studios by Barron Hall and Parker Pressnell at Pressnell Hill Pottery. The aprons were hand-tailored by Marcus Hall at Marc Nelson Denim. Pretentious Glass made the beer glasses. The art on the left (facing the kitchen) is by Mark Carson English. The art on the right is by Lauren Lazarus.

While there is a an opening between the Old City Wine Bar and Rebel Kitchen, the two will operate a bit differently from one another. A light menu will continue to be served in the wine bar, while the restaurant will offer a full menu featuring Chef Paul’s eclectic flair. “I seek out great products and try to make something unique. I’m not looking to do the same thing as other restaurants.”

Many of those great products come from local providers, including Rushy Springs Farm, Bales Farms, Lacewing Farms and Spring Creek Farm. Epiphany Coffee Roasters worked with them to develop a custom roast. In addition to wine, the restaurant also offers beer, a full bar and coffee drinks, including French Press as well as espresso and cappuccino. They also have a selection of French teas.

Chef Paul says the menu will appear to be simple, but many of the dishes are quite complex, some requiring days of prep. Staff will include eight in addition to Paul, Franchesca and Matt. Expect the eccentric and surprising when the menu is published. He’s also been experimenting with a mocktail which includes several fruits but is perfectly clear in the glass. He’s just getting started. Small plates (starts) will range from $12 to $18 and entrees will range from $25 to $35.

The full wine menu from Old City Wine Bar will be available in Rebel Kitchen. Sommelier Matt Burk says they are, “still offering fifty wines by the glass and two-hundred-fifty by the bottle.” He’s shifted the stock slightly because he, “brought more offerings commensurate with the full menu.”

He promises wines you won’t find in the grocery store and he’s got a stronger emphasis on “natural wines,” or wines made in more traditional manner with less human intervention. He says they tend to pair better and, “come out clean and fresh.” He also mentioned that with the increased demand for high quality wines from local upscale restaurants, the selection offered by suppliers has improved.

Matt’s no longer the only person on staff with wine expertise. Derek Moore is a recently hired sommelier who will work weekends. Emily Crutcher, who you may know for her long tenure as lead bartender behind the bar at Old City Wine Bar, recently sat for her first sommelier test. Another staff member is pursuing certification, as well. He says they are all available to help people navigate wines with which they may not be familiar.

Everyone pointed out that the restaurant will evolve, as will the wine list, so enjoy what is currently offered, but expect new culinary experiences in the future. General Manager Franchesca Sellas points out that everyone works as a team making sure all the details are attended to, regardless of individual roles.