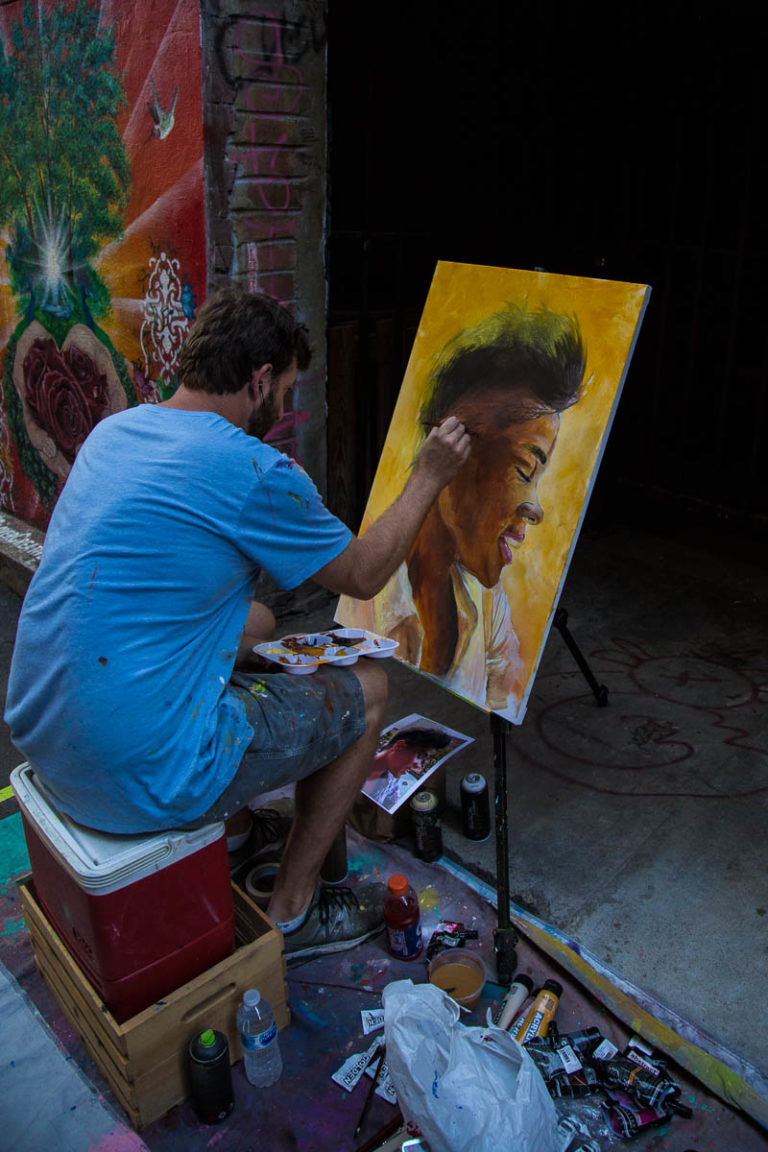 After not doing so for some time, last month I got out into the thick of First Friday, focusing on outlying participants. I noted that it’s been a while since our gang participated very much in the monthly ritual. Well, maybe this First Friday thing is going to catch on . . . we made it out two months in a row. We made it more of a First Friday weekend, starting early on Friday and easing into Saturday with more fun.

Friday morning Urban Woman and I walked to The Standard to get a jump on the crowds for the Mast General Store Basement Sale. As if! Not long after the massive sale started, crowds overran the place. I counted seventy people in line to make a purchase. I thought most people would be working and we’d hang with a few downtown neighbors. Not so. Has word gotten out about downtown?

While we were out, we decided sometime around noon to stick our head into the Emporium where our friend Judy had an exhibition. Boy, did we discover the First Friday motherload of a secret: All the art is in place way early in the day! No one else is around! We took our time strolling through the new exhibition at the Emporium with maybe another two or three people milling about. Very pleasant. We returned later to momentarily brave the crowds and say, “hello,” to our friend, but we’d already seen the art.

The UT Downtown Gallery wasn’t open early, thwarting our devious plan to see all of the art early, so we returned around the official opening time for Frist Friday to see the art of Ben Seamons who died two years ago in a tragic accident. Ben was widely loved by many, from artists and makers to the local craft beer community, of which he was a big part. The exhibition was a celebration of his work. He had an MFA in painting from UT.

Urban Woman hadn’t seen the interior of the Double S wine bar, so we stopped in there and she fell in love with the back deck, which is pretty cool. We decided to have a cheese plate and a glass of California white wines. The cheese, wine and deck were wonderful. The temperatures hovered just around the barely OK mark and we had a great time there.

It wasn’t quite a full meal, so we wandered a bit before deciding to sit for a while on our favorite patio – outside Tommy Trent’s. We were bad. She had her first hot dog in a couple of years and I had the wings and a margarita. We really enjoyed every minute of being bad and enjoyed chatting with people as they passed. Urban Brother joined us in progress.

The centerpiece of the night included several runs through the ArtWalk Art Slam in Strong Alley (which the alley between Market Square and Gay Street). The event was sponsored by CBID, The Muse Knoxville and Dogwood Arts. The alley is known for the artists work on each side and has recently had bistro lights added to give it a little ambiance (thanks Bernadette).

It’s also a working alley with garbage cans, grease trap smells and sewer, so it’s fascinating that it has become such a place that people seek out. The art has proven to be remarkably long-lived, though recently that code of ethics has suffered as some of the paintings and drawings have been defaced.

It was fun and got people into the alley. Maybe as it becomes more popular, the defacement we’ve seen recently will recede. New works are planned for the alley and proceeds from the evening will go toward that refreshing. As I said in a recent article, it’s interesting to see what makes a “place.” In this case, art, a little lighting, an improved pathway (thanks to the city) and people gather.

After her hot dog, Urban Woman had seen enough and headed home, while Urban Brother and I walked back to the 100 block where we sat in the window seats at Cru Bistro and he at dinner. I had the crab dip and, OK, another glass of wine. Don’t judge: it was Friday night. 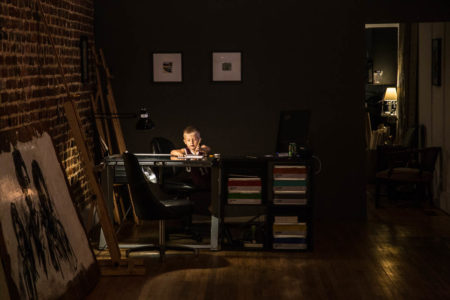 We’d intended to end the evening with music, but we were both tired, so we called it a night. The whole clan gathered early the next morning for the Market Square Farmers’ Market to gather the groceries, facials for the two women, followed by hanging out and watching football on television while watching all the fans come in for the game. We have two ETSU graduates in the family, one of whom is a UT fan, so it made for an interesting pre-game build-up. Not much interesting after the game started (or re-started).

One highlight for me on Saturday was finally having Urban Girl, Urban Daughter and Urban Woman together so I could show them their brick. I bought it for Mother’s Day to support the effort to bring us the Febb and Harry Burn Suffrage Statue, but it wasn’t installed until this past week. I think they liked it, though Urban Girl’s expression tells what she thought about lying on the ground to pose with the brick.

So it was a fun First Friday weekend. I may just make this thing a habit after all, which is funny considering that ten or twelve years ago we hardly ever missed it – and that was before we moved downtown. Meanwhile, Visit Knoxville has set up a fresh page for everything First Friday, so check that out. And let’s start getting ready for the next round.