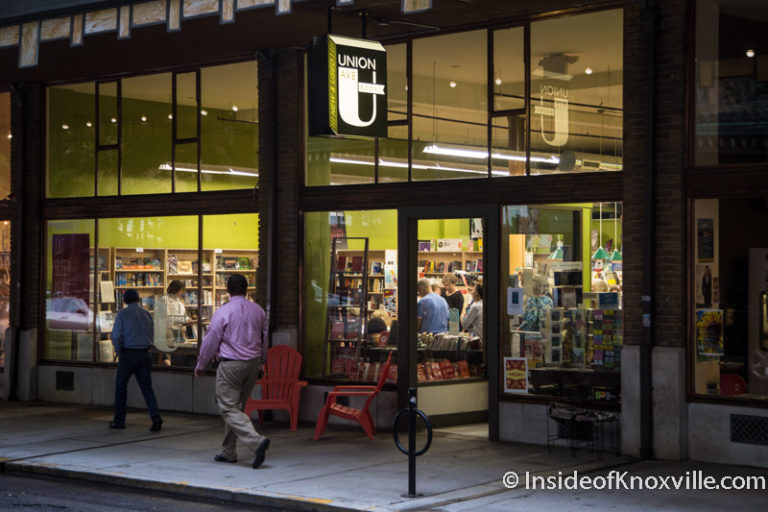 Nobody reads anymore, right? The independent bookstore is dead and digital reading devices have replaced traditional books. If anyone wants a book, they order it online. Right?

Apparently, the simplistic narrative doesn’t tell the complete story. Union Avenue Books, founded by Flossie McNabb and currently co-owned by Flossie and her daughter Bunnie Presswood, Knoxville’s downtown independent bookstore, has done very well since opening in June 2011. So well, in fact, that they have announced an expansion to include the space beside them, most recently occupied by Coldstream Market.

Flossie says the book store has taken a gradual approach to make sure it was on solid footing. That said, she is pleased to say they store has been in the black every year from the beginning. They’ve gradually updated computers and painted. They’ve gradually given raises and built an excellent team. And they’ve been rewarded, as year-over-year sales have consistently improved.

They have enjoyed and gotten as much as possible out of their 1500 square foot space, but Flossie acknowledges they’ve always dreamed of someday expanding. It has taken seven years, but they have finally arrived at that point. When the adjacent space became available, she didn’t hesitate. The shift will add about 50% more space, bringing the store up to 2,150 square feet.

A large opening between the two spaces will soon be completed and the possibilities of the increased space are tantalizing. Some plans for its use are already in motion and others will, no doubt, evolve over time. The new space will be incorporated into the book store, but it will also serve as an expanded event space. This will allow for larger (and more comfortable) author events, while also offering expanded merchandise.

Excitement rises in her voice as she imagines more science fiction, general fiction, children’s books (and other items) and more regional publications. With the expanded space, the books will be easier to spot. Also expanded will be Union Avenue Books branded merchandise, like coffee cups, t-shirts and bags. Expect to see more sizes and colors, and something else pretty special: Local artist Bran Rogers will produce a drawing of Scout, the lovable book store mascot, which will adorn some of the new items.

While the bookshelves lining the walls of the new space will be conventional, unlike the current bookstore, no bookshelves will extend into the center of the new space. Tables will occupy the center of the room and they’ll all be on rollers, making them easy to move and to replace with the new chairs the book store is purchasing. Author events should be more comfortable for those attending as well as customers who want to shop during an event. She marvels that they had upward of 100 people in the store for an event with author Nikki Giovanni.

Flossie was also co-owner of Carpe Librum, Knoxville’s previous attempt at a book store. She says this location has been more successful for many reasons. She feels the other space was too big from the beginning (it was much larger than the newly reconfigured shop). She also feels downtown more naturally fits an independent bookstore, with many tourists stopping into the shop and the foot traffic that produces customers stopping in on a whim. Of the large numbers of customers from other states and countries, she says they never had that at Carpe Librum.

So, there’s a lot to look forward to, starting with a wider selection and larger, more frequent and more comfortable events. And expect changes as the store grows into the new size and identifies what customers would like to see stocked. The hope is for a mid-October grand opening event for the expanded store. Be sure to congratulate Flossie, Bunnie and the new staff on building, sustaining and expanding such an important part of the soul of the city.

Ed. Note: With today’s literary theme, this seems a perfect time to plug an upcoming event that gets to one of the bedrock stories of our literary history. Mary Utopia Rothrock, Knoxville’s first librarian, will be honored on her birthday with a ceremony beside her grave in Old Gray. Join Knox County Mayor Glen Jacobs, Jack Neely, representatives of the Knox County Public Library (sponsors) and others for the celebration September 19 from 4:00 PM – 5:30 PM.

That’s right. Knoxville is having a birthday party for it’s first librarian. Who does that? Do we not rock? Heck, we Rothrock!