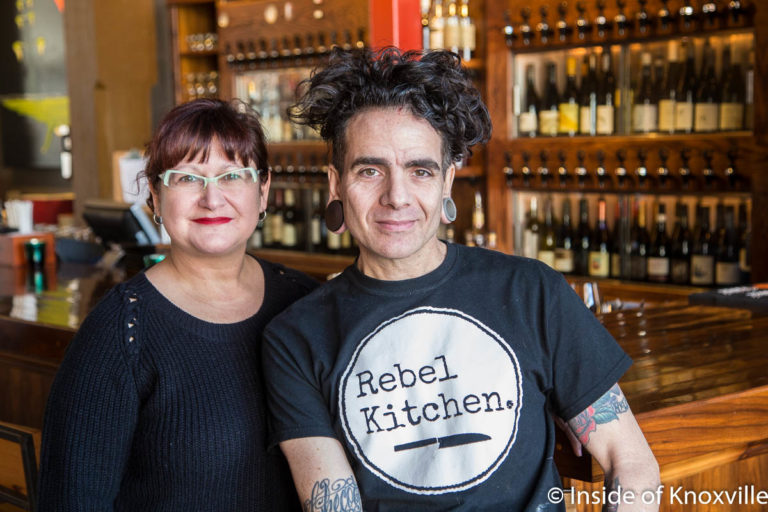 A new restaurant, Rebel Kitchen, is coming to the Old City as an expansion of the Old City Wine Bar. General Manager Matt Burke said that since accepting the adjacent space last year, the group has been looking for the right fit for an adjacent restaurant. The bar expanded their patio space in the spring, but the best use for the neighboring space seemed elusive.

It turns out that the answer was very nearby in the form of Franchesca Sellas who had worked for the wine bar early on and in her husband, Chef Paul Sellas who was working around the corner at the Crown and Goose. He’d worked there with Jeffery Dealejandro and became Chef on Jeffery’s departure to Oli Bea.

While he enjoyed working under the new management at Crown and Goose after it was sold to Randy Burleson, he longed for a place to express his culinary creativity. For that reason, he started the Rebel Kitchen Pop Up Dinners with Franchesca’s management help. When Thomas Boyd, owner of Old City Wine Bar, mentioned needing a chef, Paul expressed an interest and has recently begun working their small kitchen to produce light foods for pairing with the wine.

The two have continued popup dinners, primarily at Central Collective, where they found a full kitchen and a comfortable relationship with owners Dale Mackey and Shawn Poynter. Paul said it is all part of a lifestyle that started when he was young and his family ran a restaurant. At the most recent pop up dinner, the couple worked alongside their three children (who got all the tips), echoing his own early years.

Meanwhile, Matt Burke realized he’d found a complete and ready package: A couple with a passion for food and hospitality, a name, a vision and they were ready to go. Matt and Thomas attended one of the popup dinners and were convinced Chef Paul was their answer. They both remembered an amazing amuse-bouche which was set in a planter with edible “dirt.” It was delicious, but it was also fun.

Paul acknowledged that his view of what is possible in a dish or in a restaurant may be a little askew or counter to conventional preparations or presentations of food, hence the name, Rebel Kitchen. He offers his skills and perspective as the product of a learning process that included working with, “the hardest working people in the restaurant business,” his parents. His mother a restaurateur and his father, a chef operated a French restaurant in his formative years.

His dad, originally from Greece, would take the family to his country of origin and they enjoyed great food at someof the finest restaurants there, as well as in other countries in Europe. One meal he still remembers distinctly is when he and his father ate at the Crissier, Switzerland restaurant of Frédy Girardet, who is considered to be one of the greatest chefs of the last century. He wants to bring that level of experience to his own restaurant.

Paul attended the Culinary Institute of America at Hyde Park, New York and he’s worked with some of the country’s top chefs, including Jean Banchet, David Burke at River Cafe in Brooklyn who taught him to highly value presentation, Ressul Rassallat, Zach Bell and Daniel Boulud.

“I could go to Walmart and buy chicken and it would be good, but that’s not for me.” His goal is a small, rotating menu that will reflect both his background and the excellent fresh food he can source. Saying he grew up with chicken, lamb and fish, he says you’ll find those dishes on the menu. “It won’t be southern cooking, but it will be different and we’ll be doing it well.”

Stressing the importance of fresh ingredients, he noted there may be times items are removed from the menu because the meat or vegetables don’t meet his standards. Extolling the virtues of local tomatoes, for example, he said he won’t eat them unless they are local. This may mean canning tomatoes during the summer for use in the winter, curing peaches or preserving strawberries in syrup. He says if it has to be brought in from elsewhere, he won’t use it.

Much of his ethic with food goes back to his childhood. His parents sourced their food this way because that’s what they had to do. It was what they could afford. He remembers watching his grandmother baking bread in an outdoor oven. His parents also cooked table-side. In a tip of the hat to that, the new restaurant will have six counter seats facing the open kitchen for people who enjoy watching food preparation. An additional forty table seats will be available.

The two sides will also be connected through the current wall in the front and guests waiting for seating (they will take reservations) in Rebel Kitchen can relax in the Old City Wine Bar. The cellar will still be available for private events or larger parties. Staffing will now be adequate to make seating in the cellar more manageable.

Thomas will be owner of the entire enterprise, Matt Burke will continue his role as sommelier and General Manager. Franchesca will be front-of-house manager. To that task, she brings a lifetime of experience in the hospitality industry. She has a degree in Hospitality Management and a lifetime of making restaurants successful.

The new restaurant will offer vegan-friendly, vegetarian and gluten-free options. The couple noted that they first worked together at the Green Sage in Asheville, which Franchesca helped open before Paul became chef. The restaurant emphasized vegan and vegetarian food and sustainability in every way. Paul prides himself in making dishes to these dietary specifications which are the equivalent in quality and presentation to all of his food.

Putting the concept into a single pithy phrase proved a perplexing task as the five of us turned over repeated options. Certain words kept cycling around: avant garde, whimsical, approachable fine dining, locally sourced, eclectic. Suffice to say you’ll find a comfortable dining experience with no white table cloths, but Paul hopes you feel you have a fun experience as you enjoy excellent food with a beautiful and sometimes quirky presentation (he promised liquid nitrogen would be used regularly.) He likes showmanship, but he points out that it starts with great food.

The restaurant should be open this spring – they would prefer earlier, rather than later, if possible. Hours will likely start at 5:30 PM for a first seating, with a final seating at 10:00 PM.