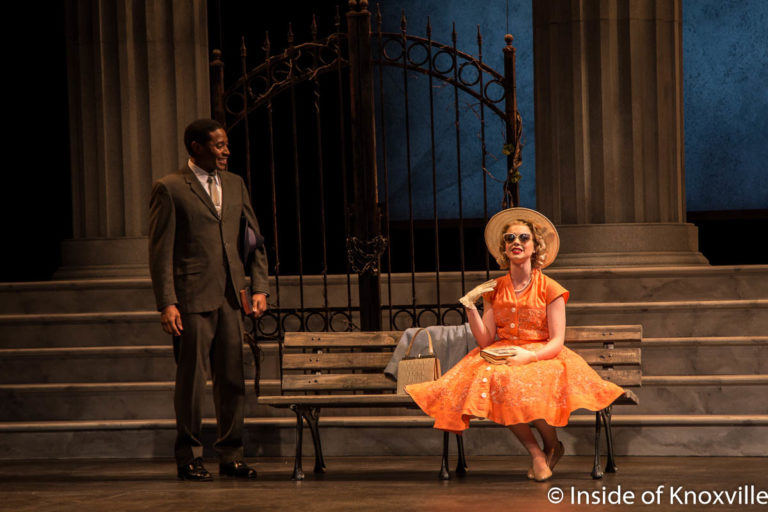 While Alabama Story (currently being staged by Clarence Brown Theatre) playwright Kenneth Jones refers to the setting for his play as the “deep south of the imagination,” for those of us familiar with the deep south – and particularly a deep south of an earlier era, the setting could not be more realistic. The play itself, in fact, is based on the true story of a librarian in Montgomery, Alabama who stood up to a state senator who wanted to censor a number of books he felt promoted a view of the south and of racial relations he felt should not be tolerated.

The play opens with the cast telling Kate Cunningham, in the role of librarian Emily Wheelock Reed, to tell them a story. The story opens with Ms. Cunningham, who is Artist-in-Residence this season at Clarence Brown and Chris Klopatek as her assistant, in his first Clarence Brown appearance. She is from the north and has been State Librarian for the state of Alabama for just over a year. He is from Montgomery and is helping her understand and acclimate to local customs.

In a parallel story to the book which will be challenged, childhood friends Joshua Moore (played by Jade Arnold) who is a black man and Lily Whitfield (played by Brittany Marie Pirozzoli) reunite in a chance meeting and share memories of their childhood. Hers was a privileged life in the “big house,” while his was much less so. In a telling moment, he refers to the shack he and his mother lived in on the property. She bristled at the use of the word, “shack,” saying it was a “carriage house.”

The play begins to move when a local paper writes a story detailing the plot of a new children’s book in which a white rabbit marries a black rabbit. The paper attacks the book, whose author Garth Williams (played by David Brian Alley who audiences will fondly remember as “Smee” from Peter and the Starcatcher) serves as a backdrop to the drama. Senator E. W. Higgins (played by Brian Mani) pays an unexpected visit to the librarian and presents her with a list of books he feels should not be included in the library collection.

Presented with humor, this is none-the-less a serious work about some of our most serious topics. Censorship plays a central role in the drama. While the topic of this attempt at censorship, a children’s book with a black and a white rabbit marrying each other, would not raise much issue among most of us today, censorship and attempts at censorship are alive and well in the United States in 2018. You can explore the books most often challenged here. Almost half of the Radcliff College Top 100 books of the century (20th) have been challenged.

The drama is also about race. When Lily and Josh have their chance meeting, she is seated on a bench with her coat draped over the back. When she removes it, a sign on the bench is revealed which says, “whites only.” While they talk, one man stops to ask if she is OK – the implication being that the “boy,” may be bothering her. The racial divide is obvious in the differences in their memories of growing up which, while overlapping considerably, also held clear distinctions between the two.

The play begins its run tonight with the first of two previews and the official opening night on Friday and continues through February 18. Tickets may be purchased here.