Time To Pay Attention to the Details, Knoxville (Or How An Aging Cyclist Could Have Met His Death) 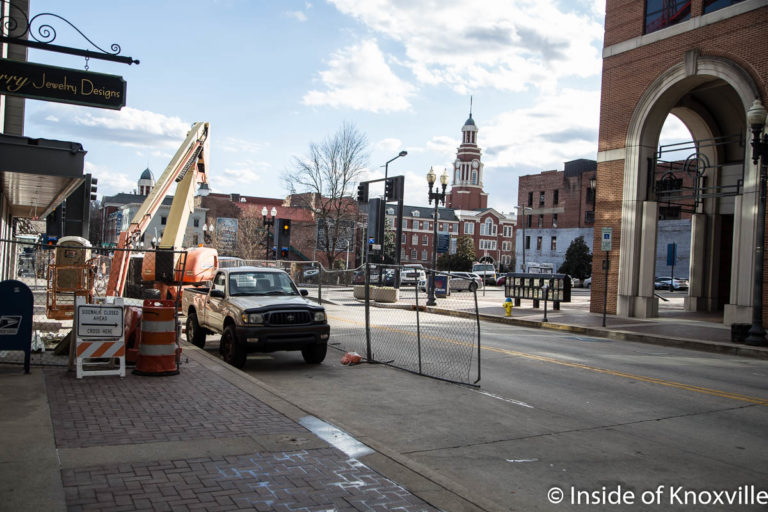 Construction on the Tombras Building, Corner of Gay and Church, Knoxville, January 2018

We pride ourselves on our walkable downtown. We spread the gospel far and wide that we are all about cycling and the active lifestyle that implies. We’re taking care of pedestrians and spending more money than ever on cycling safety. So, we’re all that, right? Maybe not. See, the devil is in the details and if we’re going to promote ourselves in that manner, we really need to attend to those little – and not so little details.

For pedestrians, one of the details to which we must attend is how we handle construction and its impact on pedestrians. Are we happy to have development and construction? Of course, we are. It’s a good thing. Our long moribund downtown has come back to life and is getting better at every turn. But while we construct our future, we have to also attend to our now: We have more people walking our streets than at any time in recent history. We need to keep them safe.

On a recent trip to New York City I witnessed massive amounts of construction – sometimes seemingly on every block – but I never hit a point where I needed to backtrack a block out of my way to continue forward. I never felt compelled to step into the street because of construction. Maybe I got lucky and missed the real construction knots that would have been different.

Here we struggle with the issue. We all have our favorite construction projects to grumble about, I suspect. For me, one of the worst was during the construction at the I Love Juice Bar at 2 Market Square on the corner of the square and Union Avenue. The entire sidewalk was blocked for months, parking was prohibited, but construction vehicles parked there all day. A pedestrian approaching that corner and wanting to visit Coffee and Chocolate had three options, two of which were legal and the other of which the vast majority chose.

Legal options included turning around and walking through Market Square, down Wall to Gay, down Gay to Union and up Union to the shop. Sound crazy? The other legal option was to walk back to the middle of the square and cross on the legal crosswalk to the other side of Union, walk down Union (past Coffee and Chocolate elusively smiling from the other side of the street) to Gay, cross there and come back up Union. Of course, most everyone coming from both directions into the mess, walked between the parked construction vehicles, waded into traffic and either got hit or kept going on their way.

We now have a closed sidewalk on the other side of Union at the Conley Building. You see several pictures here. Not only is the sidewalk closed, but so is the single lane on the road. Traffic is routed to the parking spaces while pedestrians use the other side of the street. On the Gay Street side of the building there is a pedestrian tunnel at this time. Pedestrian tunnels seem to be an exception here, while they are common elsewhere. There’s also one, at the moment, on the far side of the Holston as the residents have work done on their building.

The current project that seems most egregious, to me, is the Tombras Building. I love the building, love the company, delighted they are coming and hope to have an article about it soon. However . . . that mess outside the building is just beyond words. You can see the fencing and the placement of the sign on the sidewalk. If you do what the sign tells you in that placement, you are jaywalking across the street and may get killed.

The legal option if you leave Rick Terry Jeweler and want to walk around the corner to the Elliot is to turn around and walk the length of the block to the corner of Clinch and Gay (at Clancy’s). Cross to the west side of the street and walk back down the block on the other side. You’ll then need to cross Church, cross Gay, walk down another block to State, cross Church again and come back up the hill to the Elliot.

Do we do that? No. We walk around the chain link fence, risking our lives to avoid the long, legal walk around.

I talked to Rick Emmett, downtown coordinator, who agreed there are problems with some of what has happened around downtown construction projects. He pointed out that answers aren’t always simple. Materials have to come and go from the building. Materials have to be staged from some place. It’s hard to do that for a major project and have people passing through the site.

The construction tunnels can also bring problems of their own. The city would have to develop specifications for the tunnels. Some of you will remember when the tunnel in front of the JC Penney Building collapsed in a wind storm and only fortunately did it not hurt someone. And is the interior lighted at night? If so, is the wiring inspected?

Emmett also noted that a problem developed with some of our homeless friends taking up residence in the tunnels. He did add that the fees charged for blocking the sidewalk and taking portions of the street have increased in order to give the contractors an incentive to move as quickly as possible out of the street and off the sidewalk.

So, it’s difficult. It can’t always be perfect. But if we expect residents and tourists to experience the walkable city we talk about, we must do better.

And then there was my bike ride from hell in which this aging cyclist could have died . . .

I rode my bike south down Gay needing to travel from downtown to Alliance Brewing. I knew the Gay Street Bridge was closed to cars, but reasoned that surely it would be open to cyclists and pedestrians. It’s a major route for both and work wasn’t being done on the actual bridge, just on the other side. Obviously, there would be accommodations for us, right?

No there was not. That baby was hermetically sealed. So what to do? I could turn left on Hill and work my way a mile or so out of the way to risk riding across the bridge with cars driving high speeds, or I could turn right on Hill and cross the Henley Bridge. I turned right.

I knew this meant I would have to go up a large hill and would have to walk my bike, but as I approached Locust, I realized there was work ahead on Hill Avenue and I would have to turn left or right on Walnut. Left meant down to Neyland and no route to south Knoxville, so I turned right. Which meant I walked my bike because it is impossible to climb.

Once at the top, I needed to go west, but Main is one-way going east, so I couldn’t legally get in the street, leaving me to ride a block on the sidewalk generating nasty looks as I wove between the pedestrians. Once I got to Locust, I rode back to Hill, having circumvented the construction, but when I reached Henley, I faced deadly options: Cross Henley illegally in order to reach the south-bound bike lane, turn left on the sidewalk across the bridge or turn left into the wrong direction of the bike lane.

I rode the sidewalk, but at the far side of the bridge, it was blocked by the beginning of the Riverwalk at the Bridges construction. I was forced into the wrong way bike lane and then had to hopscotch my way through various construction cones, barricades and fences across Blount. Construction reduced it to narrow lanes, so I traveled the sidewalk, once again.

At the other end of Blount, back at the south end of the Gay Street Bridge which I could have reached much more safely and in a fraction of the time if it had been open, I discovered that Council Place was closed. This meant that the southern loop of the street had been converted to two-way traffic and the bike lane had been eliminated to allow the traffic flow. I had to climb the hill on the sidewalk.

I survived the ordeal, but it was seriously dangerous. It left me a bit disappointed at how well we had thought through automobile traffic flow in each of these sections, but what of cyclists? When we hand out our snazzy new bikes to tourists starting later this week, is this the kind of experience we want them to enjoy?

One place Knoxville might look is to Nashville, which passed a set of Bicycle and Pedestrian Work Zone Safety Regulations a year-and-a-half ago. It’s at least a serious attempt to deal with a good, but difficult problem. So many people in our city government are committed to promoting a pedestrian and cycling lifestyle in the city, I’m sure we can find some solutions that avoid the situations noted above. It’s all in the details, but the details are critical.