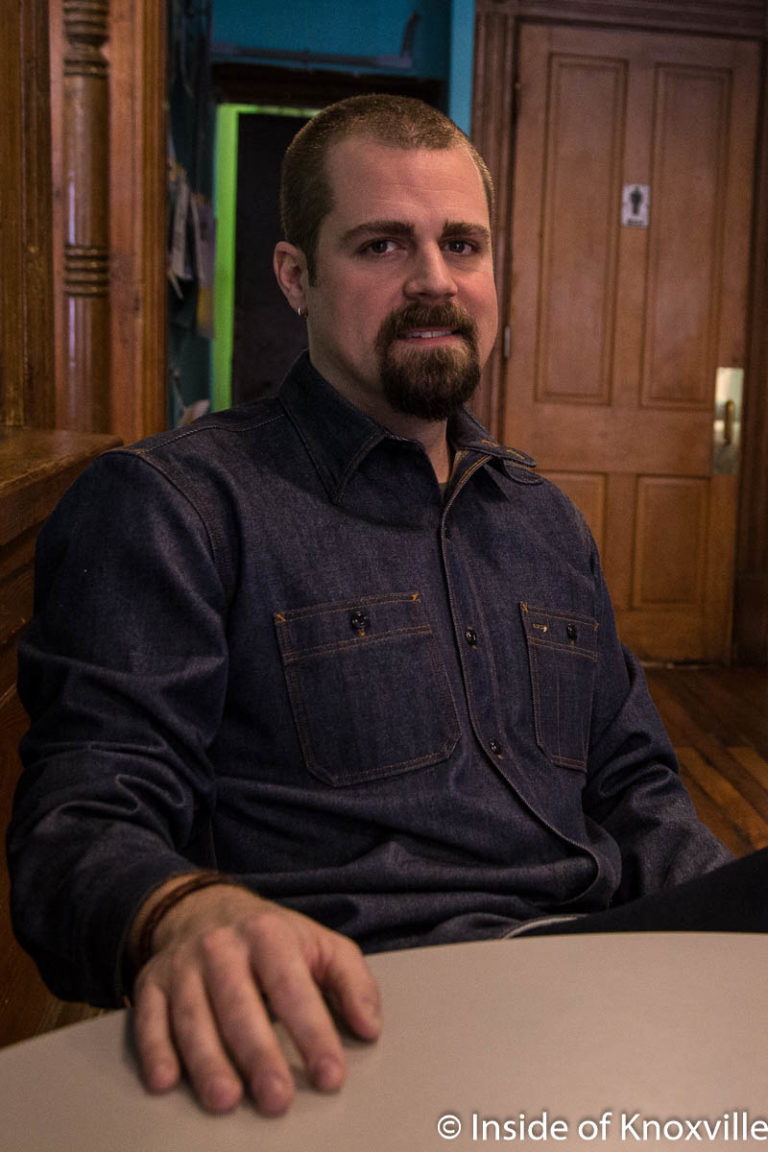 It’s a niche that has been much discussed on this website. While there are some offerings for men’s clothing downtown, it seems like an under-served retail market. Some have questioned whether enough Knoxville men care about fashion to support such a brick and mortar store. Luke Lanzoni with his locally owned, Felding Co (Facebook Page, Instagram), is betting downtown Knoxville is ready to support such an effort.

He’s spent the last year, surrounded by advisers he sought out. He said he’s experienced first-hand how tight-knit and supportive of small, local businesses. When his position was eliminated with a west Knoxville builder, he and his wife took a trip to the southwest to do some soul searching and decided it was time for him to pursue his passion. He immersed himself in an idea that had been germinating for years.

Over those years he’d traveled to places like Austin, New York, Asheville, Nashville and Atlanta exploring the kind of retail he loves: high quality men’s wear shops with a Made in America focus. It’s the kind of retail offering he’s determined to deliver to our downtown. “It’s about a highly curated experience. Brands are chosen because they are brands that I believe in.”

The store won’t be completely American Made because that is no longer possible. For example, the store will feature large amounts of denim-wear and the last selvedge denim mill in the United States, White Oak Cone Mills in Greensboro, North Carolina, closed permanently at the end of December. It’s the kind of denim which will be featured in the new store, where the focus will be “less is more,” and having two high-quality pairs of jeans is seen as more appealing than having six mediocre pairs.

Luke is from Knoxville, graduating from Farragut High School where he described himself as a student who pushed boundaries. While there he focused on art, but eventually gravitated toward English and business classes. He later graduated from UT with a degree in communication.

After graduation he worked at Cafe 4 for a while before leaving for Berlin for 2011 and 2012. It was while living there that he fell in love with men’s fashion which he described as leaning on work-wear, but also a place where any form of individual expression is accepted. He said the people were, “edgy and into style. It was a hip city where people tried everything. It was freeing.”

After returning to the states, he saw, in the cities he visited, bits of what he’d seen in Berlin and he realized that Knoxville hadn’t experienced that level of fashion and freedom in fashion. He found that people here were often asking him where he bought his clothes and the answer was online or in larger cities. That kind of fashion wasn’t available locally.

Saying that he likes a store that isn’t overwhelming, where someone guides him to three articles of clothing that are suited for him and his taste, rather than offering twenty options simultaneously. He wants his new store to be like a number of those he visited: They may offer you a beer when you enter (he’ll offer free beer in his store) and make you feel at home.

The store will also offer lifestyle accessories like belts, wallets, watches, men’s travel bags and more. You’ll find Field Notes, a line of notebooks, journals, calendars and more. Cocktail accessories will also be available. A, custom-made for the store, Knoxville hat will be offered. He says these are common in other cities. There will also be t-shirts and sweatshirts made in conjunction with Nothing Too Fancy.

Some of the brands and items you can expect, include a number of west-coast companies. He’ll have products from Portland-based Wood & Faulk, who make waxed canvas and leather bags. You’ll find hand-made leather belts and more from Portland’s Tanner Goods. Taylor Stitch shirts and pants out of San Francisco and Tsovet watches out of southern California will also be available.

More regionally, he’ll be working with L.C. King Manufacturing in Bristol, offering their chore coats and jackets. Otterwax (Portland), Tellason (San Francisco), 3Sixteen (New York) and Redwing (shoes and boots) are also among the brands you’ll find. The commonality in most cases is high quality goods offered by small companies.

He’d hoped to open last Fall and has amassed most of the inventory he’ll need to open, but the perfect space has been elusive. Still, it’s been an encouraging year and he’s realized how much he values the autonomy of making his own decisions and having the success or failure of the enterprise rest on his shoulders. At the moment he’s set his sights on three spaces and he expects to make that decision very soon, with a plan to open this spring. Once made, he’ll be able to open in very short order. He’ll also offer online sales at Felding.co.

But you can connect in the meantime. Give the company a “like,” on their Facebook Page and follow them on Instagram. Even better, you can check them out at a couple of pop-up shops coming soon: Rala, February 23 and 24 and March 9-11 at the Nothing Too Fancy Print Shop on Broadway next to K-Brew.