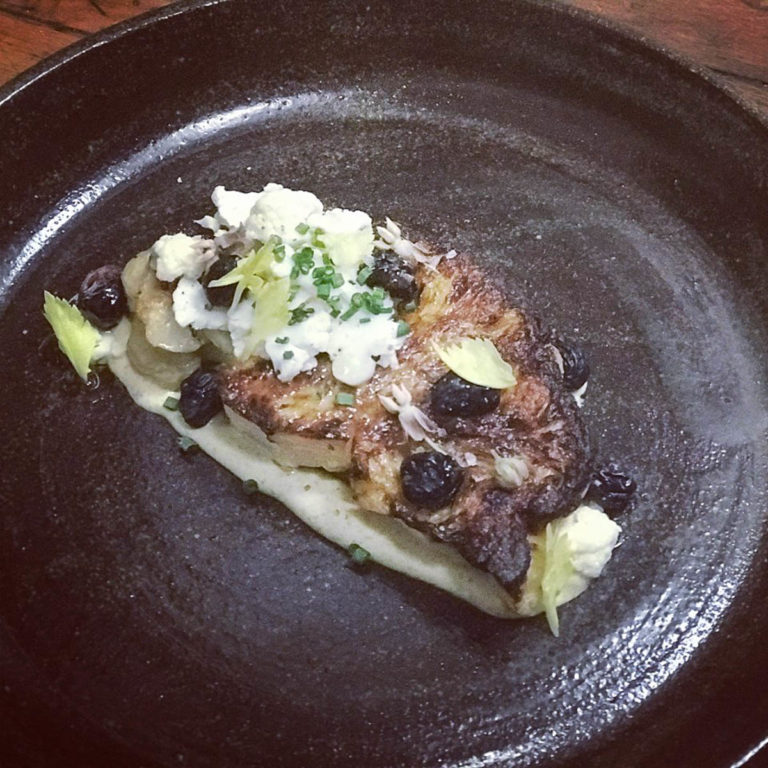 It’s been a long and circuitous route  to where he’s landed, but Parker Pressnell, whose handcrafted plates and serving pieces will soon be featured at Rebel Kitchen, says he doesn’t regret the journey. It started on a farm in Tazewell, complete with horses and cows and he says he learned a lot about life there.

He graduated from Claibourne County High School where, he says, he didn’t have art opportunities because funding cuts had resulted in their elimination. After high school he started a life-long habit of working two jobs – while also showing horses. In the early 90s he moved to Knoxville, living in Ft. Sanders and working doing phone triage with a Family Practice clinic in Clinton. It’s a career he’s maintained more or less consistently.

After a couple of years in Franklin, Tennessee, where he became involved in another long term passion – dog rescue – he returned to Knoxville to work for Covenant Health when a twist of fate took him in a direction that would change his life. Friends invited him to take a pottery class at St. Andrews Episcopal Church in Maryville. He told himself, “I’m a little OCD. I can do this.” And he did. “The more I did, the more I tried.” It became a passion.

The wanderlust didn’t go away so easily, and he took a foray to Colorado Springs for three years where he continued working his new-found craft and volunteering for the Mill Dog Rescue. Tennessee wouldn’t let him go and, upon his return to Nashville for what would turn out to be a five year stay, his art took a professional turn.

He joined The Clay Lady’s Studio and helped run the gallery, which paid in studio time. He built a wood kiln and learned how to operate it. He learned how to operate a gas kiln and established a relationship with a broker who continues to sell the majority of the work he can produce. He had his first work featured in a gallery at Art and Invention Gallery  Meg McFadyen, one of the owners became a mentor. “She pushes you to be better.” She’ll also have some of his work at this year’s Tomato Festival in Nashville.

While in Nashville, around 2011 he caught a couple of breaks. The first was when a new restaurant, The Tippler, located near Vanderbilt saw one of his pots at the Nashville Farmer’s Market and commissioned him to make their plates and serving pieces. Recalling it, he says, “It was completely by accident.”

Meanwhile, back at the Clay Lady’s Studio, Caroline Cercone took three months to teach him to operate a gas kiln. He started with a small kiln and moved to a much larger kiln. “She taught me everything I know about fired kilns.” He adds, “She taught me how to focus, pull things together and to work harder to get things done.” Around 2011 when Husk Nashville was set to open, Caroline was asked to do Husk’s dinnerware and serving dishes and she asked Preston to join her.

After a side trip, “for a couple of quick years,” to Wisconsin, he returned to east Tennessee to be closer to family. He returned to the family farm in the fall of 2015 and moved back into Knoxville about a year later. He says he walked into Mighty Mudd and said, “I’m back.” Once the business moved to their new location on Jennings, he was able to move his equipment from his nearby Old North Knoxville home and begin work in the studio.

Meanwhile, Arthur Hsu, a long-time employee of the Travel Channel has signed up for his first pottery class at Mighty Mudd. He recognized Parker from his Facebook picture and invited him to a dinner party at his house. Parker says, “I almost didn’t go.” But he did and the two began dating, with the relationship eventually becoming professional as Arthur took to his new endeavor.

He’d moved to Knoxville from D.C. when he was transferred two years ago and says, “I love everything about Knoxville,” citing his great friends and the local breweries. He became curious about pottery and says he couldn’t resist the fact that classes were offered two blocks from his home. At first he didn’t care for it and he struggled. Parker helped him get better and now he considers it an extension of the creativity he brings to his work with the Travel Channel.

Arthur says the two are Thursday night regulars at the Old City Wine Bar (half price bottles!) and one night he blurted to Chef Paul, “You should have Parker do your plates.” Chef Paul was open to it and asked to see his work. Parker said, “I told him, ‘I’ll make some for you.’ I made some pieces I liked and showed him, they made suggestions and I incorporated them.It took about fifteen tries to get the glaze the way I wanted.”

He’s been working on the project for about three months, saying, “making pottery is muscle memory in your hands.” He has just about another month to finish the project so they can open and he’s spreading the work out so he doesn’t take all the kiln time at Mighty Mudd for the large job. Arthur has joined him for the project, marking his professional debut.

Asked what is next, he pauses. “I’d like to move more into art and to take chances. I thought the other day, ‘I’ve succeeded. I have a full life of family, friends and work.

You can enjoy his beautiful dishes when the restaurant opens in August adjacent to the Old City Wine Bar. You’ll find the business at the Pressnell Hill Pottery Facebook Page, and on Instagram (@PackofDogs).