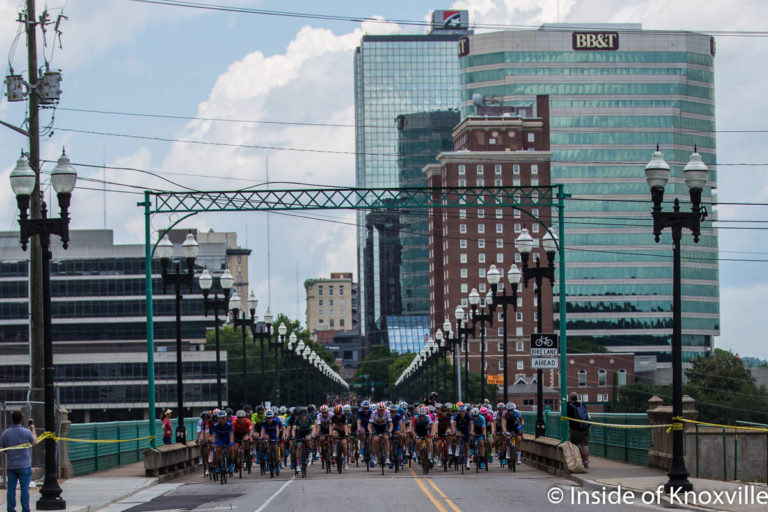 As much fun as the criterium offered on Friday night, the main event in cycling waited for Sunday in downtown Knoxville. The crowds were solid, but unspectacular, but they grew through the day. As was the case last year, I missed most of the women’s race due to the radio show, but I was able to catch the last couple of laps and to see Coryn Rivera cross the finish line first.

The weather alternated between cloudy and tolerable, sunny and nearly unbearable, and rain. Fortunately, there was less rain than had been predicted earlier in the week. It was hot enough after the women’s race, that I took the forty-five minutes to catch some air-conditioning and lunch back at the house. I missed the women’s podium and I regret that.

The men’s race started as a typical long-distance road cycling event: A break away formed and was gathered in by the peloton. More cat-and-mouse followed with the peloton shifting forms and numbers. The cyclists became so strung out that riders were being pulled off the back. As a spectator, it was hard to know who was passing – whether beginning or ending of the pack.

Eventually a four-person breakaway established itself and gained some time. It was still relatively early, maybe six laps into the race, so typically they would be pulled back into the pack. A small chase of six riders formed behind them and then, in a surprising development, the peloton shattered. By halfway through the race there was scarcely a pack to spot. Suddenly, it appeared the race was between the two lead groups.

Strategically, the second group, while comprised of six riders, faced a challenge: Two of the riders in the group had a team-mate in the front four and were content to let them contend for the championship. As a result, they declined to take turns pulling the group forward and that likely doomed the group from making up any ground.

The lead held, then extended and by the time six laps remained, it began to appear the breakaway group of Robin Carpenter, Jacob Rathe, Gavin Mannion and Jonathan Brown might, indeed, make it to the finish without being caught. Two laps later they had extended the lead and little question remained that they would be the lead group crossing the finish line.

The question then became two-fold: Which of the four would have the push at the end to win the championship and which of the four would be left off the podium? The commentators speculated on the range of experience and success among the four. Body language and fatigue were evaluated. Arguments were made for Carpenter – a race favorite at the beginning of the day – but also for Rathe and Mannion.

No one mentioned Brown. Later a commentator admitted that they might have considered his brother, who was also in the race, as an outside shot. In the middle of the penultimate lap, the conversation shifted dramatically when Brown made a stunning solo move to leave the pack behind with about eleven miles remaining. Did the young guy, at twenty-one-years old and the least experienced, make an error by going out too early?

The announcers went crazy, pointing out the most unlikely of stories: Jonathan Brown has moved to Knoxville and was on the verge of winning a national cycling championship in his new hometown. Could what would be an unbelievable plot on a made-for-tv movie actually happen? They started calling him Johnny Knoxville, which doesn’t exactly work because we already, for better or worse, have one of those.

He crossed into the final lap with a one minute gap over the other three in his former breakaway. All he had to do was hang on. The crowd at the finish line got louder, eventually whipping into a frenzy. As the lap proceeded, the six person chase group splintered, as did, eventually the remnant of the four person breakaway. Brown won the race with a forty-five second gap over second place Carpenter. Rathe bested Mannion more than thirty seconds back from that to take third place.

A more exciting conclusion could not have been crafted. Brown, in winning the national championship in his newly adopted hometown also became the youngest rider to win the championship. A massive celebration started with a big hug from his brother just over the finish line. His mother, father and girlfriend, team mates and everyone with a camera surrounded him.

Have I mentioned this is a great event? You’ll have one more chance to see it in person if you missed it this year and last. I hope you’ll take advantage of it. Visit Knoxville and the city have done an amazing job to get this and other events and it makes a difference in how Knoxville is seen by many people.

You also have a chance to hear Mr. Brown’s thoughts on the race on Sunday morning when I’ll have him in the studio to talk about the race on KnoxCentric on WUTK at 10AM. I’ll also have Judith Foltz on to talk about how the city magically makes these events happen and then disappear from the streets. She’ll also talk about the upcoming plans for the fourth of July celebration.