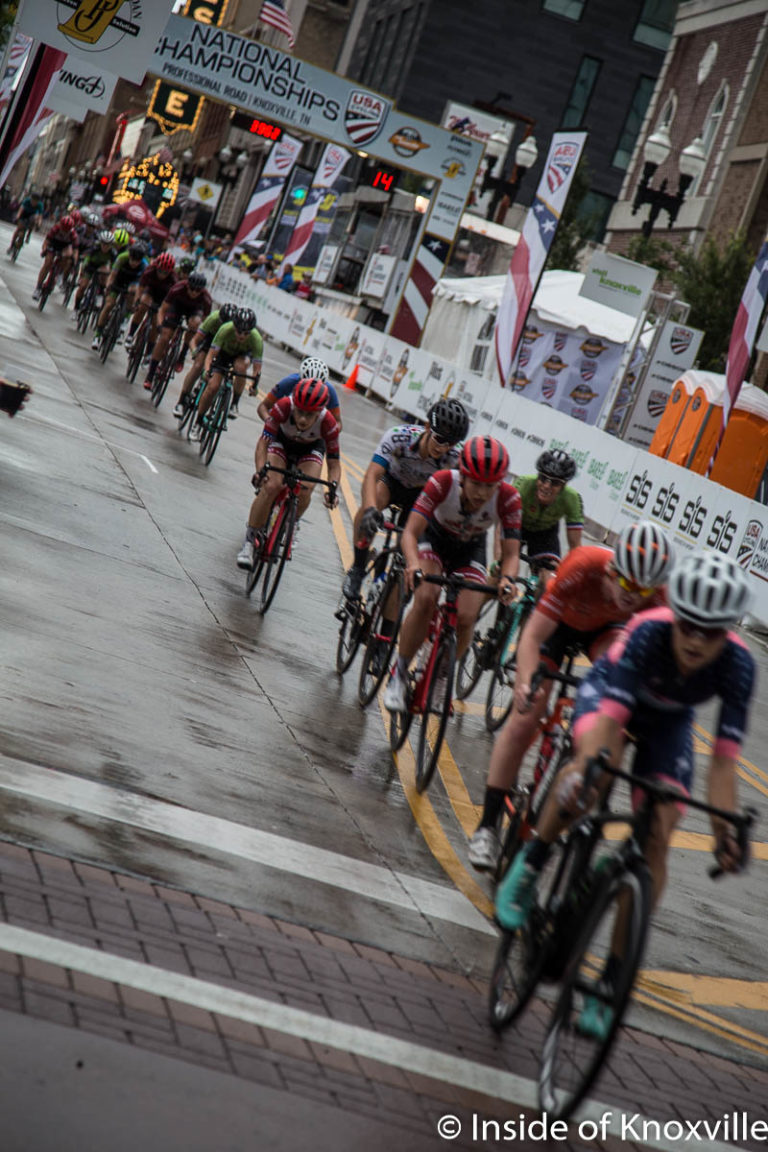 You’ll have to pardon me if I linger over this past weekend’s cycling events. The weekend was jam-packed, with Gay Street closed on Friday evening for the first national championship US Pro Cycling Criterium for men and women. The street was closed Saturday for Pride (which I’ve already covered) and again on Sunday for the Cycling Road Race National Championships.

“Criterium” was a new word to me, but it simply means, “one-day bicycle race on a circuit road course. The circuit in this case started on Gay Street heading south, turned onto Hill, moved over to Hall of Fame where it turned left, then it moved up Church back to Gay, with a left on State and another on Clinch, to complete the circuit. The women’s race was 75 minutes and the men’s 90. It’s an intense race with technical turns and the women’s race was complicated by rain.

Crowds formed up and down Gay Street, with smaller groups of people scattered about the rest of the course. Gay street was the most picturesque, of course, but other views were also fun. Small clusters of people climbed the Dwight Kessel Garage for a great view. I loved watching the cyclists pass under the massive basketball atop the Women’s Basketball Hall of Fame.

The corner at Clinch turning on to Gay was a hot spot for fans. Seeing the racers turn that corner at break-neck speed and sometimes on a wet course was nothing short of amazing. It’s hard to ride fast and make a corner. It’s hard to ride fast in a large group. To do both is why these women and men are called professionals. The corner of the railing at Clinch and Gay must have been rubbed smooth by the end of the races because it appeared to be brushed all weekend.

These races had the advantage of being shorter and having such a short circuit that the riders passed often. For fans watching longer races, there may be only one glimpse of the riders. For races like the one Sunday, there are more, but it is spread out considerably. This circuit popped during both the men’s and the women’s race.

By the very end of the men’s race, the lights came on along Gay Street and the views were beautiful. The person who came up with placing the winner’s podium in a spot that it framed the Tennessee Theatre blade sign should be given a golden Sunsphere for Best Promotional Move for Knoxville.

On the podium as the women’s winner was Leigh Ann Ganzar who was considered a surprise winner. Her background includes running for Baylor University and she’s only been cycling seriously for four years. The men’s winner was Ty Magner. Flowers, Champagne, big smiles and poses ended the night on Friday.

It was a great night on Gay Street and for those of you who missed it, I hope you’ll try to make it out next year. Knoxville has the event one more year before it moves along and it is absolutely one of the most exciting events we host. Visit Knoxville has strung together an amazing set of events for our city. We need to support them so they’ll want to return.

It’s worth mentioning that the 105th Tour de France starts next week and it’s a great way to start understanding a bit about cycling and the strategies involved. Bonus: The French countryside. We started watching it years ago, thanks to a good friend (who I miss), simply for the pretty views of France and got pulled into the race itself.

Another (unrelated) plug: I teased several weeks ago in an article about a cool announcement coming up about Suttree Landing Park. It has since been announced that the park will be the site of an excellent festival on August 18 (my anniversary, so come out and join my anniversary party). The Second Bell Festival is sponsored by Blank News and features some of my favorite bands, including Repeat, Repeat, plus a lot more. Early Bird tickets are only $20 and you can get them here.

And an announcement: Those of you who have read this blog for years know that I slow down the pace in the summer to give myself a bit of a break. I’m way late on that break because of the pace of recent news. I’m going to start taking some days off next week if you guys will stop doing cool stuff long enough to let me breathe. That’s the plan, anyway.

I’ll post more photos from the Criterium on the Inside of Knoxville Facebook Page and I’ll have a look at Sunday’s races tomorrow.