Inside of Knoxville on the Road: Denver (Transportation and Retail) 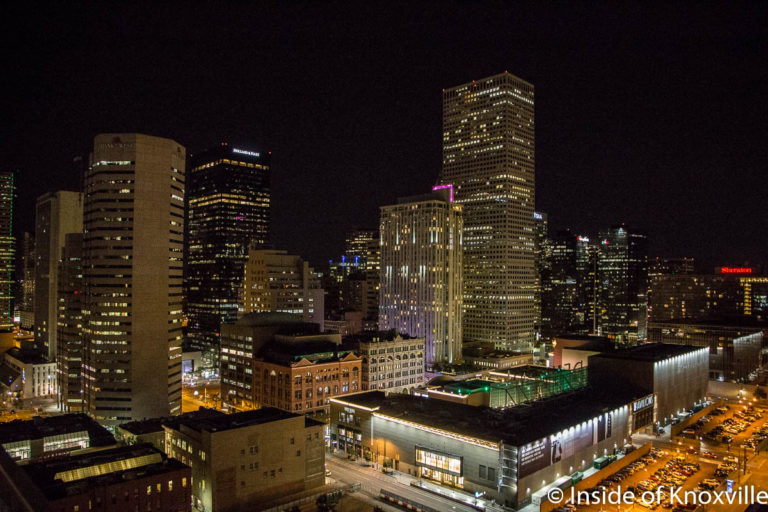 It must be confounding to some people who notice me on big trips to the city. The camera is professional, they might notice, but clearly the photographer isn’t. Most confusing is probably the subjects of photographs I take: bike lanes, buses, terminals, random green spaces. Writing this blog has changed my focus when I travel to large cities.

Last summer I traveled west with an entourage of family. We flew into the Denver airport (cheap flights!), rented a van and drove north, spending about two weeks in Wyoming and Montana, with a toe stuck over the line into Canada. I wrote about the trip through the natural areas and I wrote specifically about Boulder.

It didn’t escape my notice that, while we got to Denver relatively cheaply, we left immediately and a return trip to simply visit that city might be interesting. This spring a friend mentioned attending a Leon Bridges concert in Red Rocks and a plan was hatched. Traveling a bit leaner with just Urban Woman and myself, we spent three days in Denver, arriving on Wednesday, attending the concert on Thursday and returning on Saturday.

Of course, we stayed downtown, specifically in the hot Lodo area where construction is found at every turn and cranes seem to be a celebrated local topiary. They are often decorated in  bright colors and dot the skyline. Denver, like many urban center,s is experiencing a boom period and the evidence is everywhere. Lodo is the home to Denver’s primary development center, the pedestrian friendly 16th Street Mall, a mile-and-a-quarter of retail, restaurants and cultural attractions.

The first pleasant realization visitors find after leaving the plane and walking through the airport is the presence of a commuter train to downtown’s Union Station, which was about .7 mile from our hotel. Generally called, “the A Line,” though it is officially the, “University of Colorado A Line,” for $9 a person, visitors are transported downtown. At $18 for the two of us, this compares to a $40 Uber ride. It’s clean, quiet and pleasant.

The A Line opened just two years ago and is a significant spur in a much larger, regional transportation plan. Denver is the 29th largest metropolitan area in the U.S., but it boasts one of the top ten most extensive transportation systems. It’s a “spoke” system emanating from Union Station and it has not been without its problems.

When the plan was begun it was the biggest regional transportation project implemented since Washington, D.C. developed its system. Consider how it might feel to board a train at McGhee Tyson Airport and ride to downtown Knoxville/UT. Hold that thought for another article in the very near future.

The transportation system goes far beyond rail, however, and includes bus lines, cable cars and free shuttles along the 16th Street Mall. Protected bike lanes dot the downtown, though not every road has bike lanes of any form. According to the city’s website, “The City of Denver has more than 100 miles of multi-use trails, 130 miles of bike lanes, 39 miles of sharrows, and almost 400 miles of signed bike routes.”

Strangely enough, given the infrastructure and level terrain, we didn’t encounter as many bicycles in downtown Denver as we do in downtown Knoxville – though the latter is a much more concentrated area, so that may explain the perception. The mode of transportation we did encounter quite a bit – and not always pleasurably, as pedestrians – was electric skate boards. As an aside, the same was true for dogs – we didn’t see nearly as many as we’re used to seeing.

Of course, I also paid attention to retail and there was a lot to see. This downtown area is a blend of many local shops and businesses coexisting very well with large chains. In addition to some of the upscale retailers you might expect in a downtown, there were also locations for Target and Walgreens, discount stores like Ross, T.J. Max and others. Seven Eleven stores occupied some corners (unlike our convenience stores, they offered no parking), Starbucks were on nearly every block, as were a number of local or regional coffee shops.

Also of interest in downtown retail were several off-street malls internal to various blocks. A generally narrow opening to the street lead to a labyrinth of lanes with sometimes multi-story retail, much of the outdoor space sheltered, but still not enclosed. It is similar to some areas in Gatlinburg and maximizes the internal portion of the block without taking up the entire external side of the block, allowing for smaller shops to line the remainder of the street space. It’s a thought for a downtown like ours that is so space-limited.

If there is one retail business in Colorado generally that’s grabbing most of the attention currently, it is the marijuana business. Dispensaries like the one one shown here are just around most any corner. Patrons must present identification upon entry and again at purchase. The minimum age for purchase is twenty-one.

Once inside this particular business, my camera was noticed and I was encouraged to take pictures. This surprised me. I’m not sure why I expected it to be more secretive or cautious, but it was open, from the crops they are growing with a sky light to the products they offer. I overheard them explaining how much money has been targeted to the Colorado schools because of the money generated. It was all very professional.

Another trend that seems to be strong in the city is very mobile retail. It seemed random, though I’m not sure what the permitting situation is, so maybe it is well regulated. A clothing van parked in street parking was open for business, for example, like a food truck might operate here. I know we’ve had this in Knoxville, but not on the street, as I recall. The funniest one was the VW bug tricked out as a coffee bar on the inside. Presumably it works like an ice cream truck, tooling around until it is flagged down, whipping up quick lattes and easing, once more, on down the road.

Finally, I can’t help but mention one other business: The Tattered Cover Book Store. With four Denver-area locations, the store, founded in 1971 is one of the country’s largest indie book sellers. The Lodo location includes, “over 20,000 square feet of retail space, an author appearance and special events space that can seat over 300 people, and a full-service coffee shop.”

They started small in that location and slowly incorporated more of the retail space around them until they grew into their current space. Over the years they added a full coffee shop and a large selection of used and remaindered books to go with their large selection of new books. If a city’s independent bookstores are it’s cultural touchstone, Denver is doing well. We, naturally, bought books. We can’t help it . . . My name is Knoxville Urban Guy and I’m a book addict.

Speaking of culture, I’ll follow this article with another focused on the arts and public spaces.