Inside of Knoxville on the Road: Denver (Arts and Public Spaces) 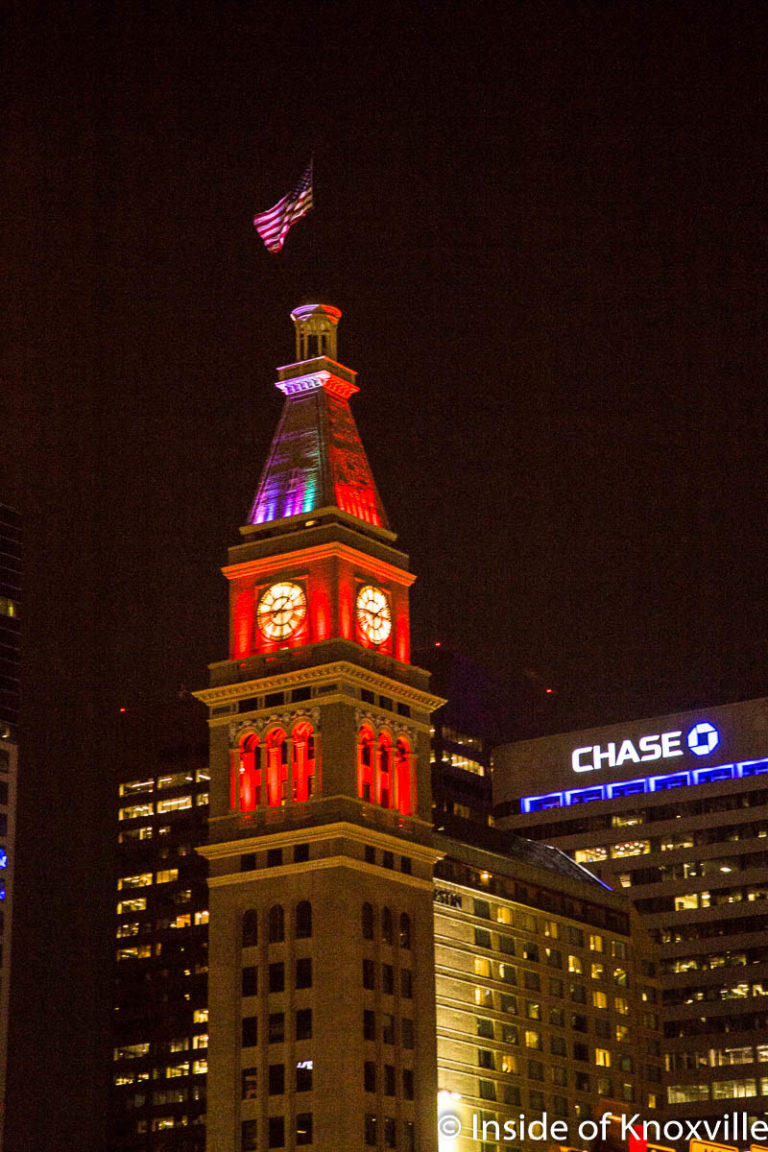 (This is the second in a two part series on Denver, Colorado. If you missed it, see part one: Transportation and Retail.)

It’s obvious on the train ride from the airport to downtown Denver that art of various sorts plays an important role in the city. The most striking indication is the seemingly endless murals on what appear to be warehouses well out from the city. Colorful and well-done, they set the tone for the sculpture, splashes of color and celebration of performing arts sprinkled throughout the city.

Our first encounter with the phenomenon came on Curtis Street as we walked to our hotel: the street beneath our feet made surprising sounds. We’d never heard of the talking sidewalk and I’m glad. We experienced the surprise at hearing a washing machine under the grates in the sidewalk. A few feet later it was barking dogs. Were there really dogs down there? What lies beneath these grates? Where am I? It became a theme.

Another installation in an alley off 16th featured a neon sign facing downward from about twelve feet in the air. At once, lighted up, the passersby see the word “yours,” and then the “y” is off and the word is “ours.” The brainchild of Joel Swanson, the installation is a part of a city-wide effort, “Between Us: The Downtown Denver Alleyways Project.”

The intention is to, “soften public space and encourage city dwellers to observe the overlooked parts of our urban environment.” The originator of this specific installation says, “This artwork playfully questions how public space is defined through notions of personal property and ownership.”

At night, colorful lights emerged in unsuspecting places like the arms of the many cranes dotting the city. The most spectacular downtown sight after dark, however, was the beautiful Daniels and Fisher Tower. Built in 1910 as a part of the Daniels and Fisher Department Store, “it was the tallest between the Mississippi River and the state of California at the time of construction, at a height of 325 feet (99 m).[2] The building was designed by the architect Frederick Sterner and modeled after The Campanile (St. Mark’s Bell Tower) at the Piazza San Marco in Venice, Italy.[3] The 20-floor clock tower has clock faces on all four sides.” (photo at the top)

Of course a merging of art and natural public space was the centerpiece of our trip: the Leon Bridges concert at Red Rocks Amphitheatre. It’s been a dream of mine for decades to see a show there and it did not disappoint. The photographs here don’t do it justice, of course.

They are from my cell phone, but look up other pictures if you aren’t familiar with the venue. The venue is as much a star as anyone who performs, with giant red rock outcroppings forming the backdrop and the sides and the Denver skyline in the background, it’s spectacular to be there before the first note of music resonates over the rocky hillside. And Leon Bridges wasn’t too shabby. Check his music out if you love old soul music.

In a testament to arts in the city, we learned that we could have seen Electric Light Orchestra at the Pepsi Center the night before our show and Chris Stapleton the night after. The traveling production of the Broadway play,”Beautiful,” was playing steps from our hotel. The arts permeate the city in every direction.

All along the 16th street mall sculptures, permanently mounted chess boards on tables, tree lined mini-parks with benches, beautiful flowers in every direction in massive pots and lots of inviting mini-spaces. And pianos. Colorfully painted pianos are sprinkled about the boulevard inviting anyone interested to stop and play.

Some of the players may have been homeless. Some were exquisitely skilled and others were forming only rudimentary chords, but all found an audience of one or more. Interestingly, the music was often quiet with an element of wistfulness. No one played for tips that I could see.

That leads to one strange omission to the art scene: we didn’t see buskers. I don’t understand it. I can’t find any information to say they are banned. We saw dozens last summer in boulder. I know they have to be there, but we did not see one in three days. Maybe on the weekend? It’s odd.

Finally, any conversation about the arts and public spaces in Denver has to include the Denver Performing Arts Complex. It covers four blocks, twelve acres, and ten venues with 10,000 seats. Ground was broken in 1974 and it has evolved tremendously since. Broadway and opera performances, private and public events and more keep the complex active year-round. I enjoyed a band playing for an appreciative audience outside one of the venues as happens before every performance.

Realizing this trip covered only three days and one part of a major city, I have to say that our time in Denver was extremely pleasant and if Denver doesn’t have the right answers to every question, it seems to have identified many of the questions accurately and is earnestly attempting to answer them. It’s well worth a look if you can take the trip.