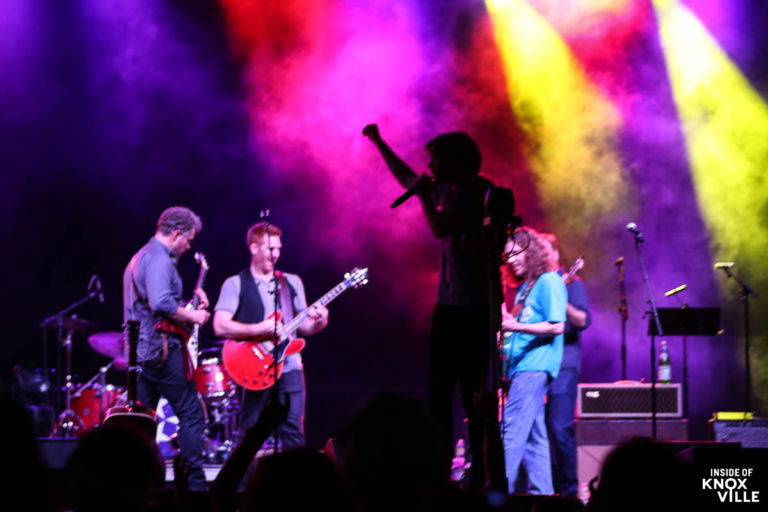 This year’s Southern Skies Music Festival has come out swinging with a dynamic two-day schedule. After stumbling a bit out of the gates with the first two planned festivals canceled due to the COVID-19 pandemic and the third impacted by the COVID-19 virus when members of Blues Traveler contracted the illness and had to cancel, this year promises to be the one in which the festival begins to find its feet. While the inaugural festival was excellent, despite the absence of Blues Traveler, this one should be off the charts.

The festival, curated by Knoxville’s own Dirty Guv’nahs, was expanded to two days and features headliners St. Paul and the Broken Bones (“A fever dream in sonic form”) and Grace Potter (Described by Spin as “one of the greatest living voices in rock today”), two entertainers who boast not only excellent music, but stunning stage presence. I first saw and wrote about Grace Potter at her 2015 appearance at the Tennessee Theatre. Also featured at the May 20th and 21st festival are the Dirty Guv’nahs, Black Joe Lewis, and Jackie Venson (I’m particularly interested in seeing her).

The remaining announced bands include a wide swath of genres and artists. Also on the bill are The Stews, Cruz Contreras, Doc Robinson, Cece Coakly, EG Vines, Kelsi Walker & the Nervous Kids, Brian Clay with Lauren Arp, and Ben McLaughlin and the Mystic Marauders. The festival is produced by Dogwood Arts who hired Born & Raised Productions to assist with talent booking for the event.

James Trimble, speaking for the Dirty Guv’nahs promised surprises and a bigger and better festival. “Our goal is for Southern Skies Music
Festival to become a southeastern music festival staple that is known for it’s hospitality, creativity, diversity, and all around fun. Can’t wait to see you all again this year!” In addition to constant live music bouncing between two stages, attendees can expect food trucks, craft beer, cocktails, a Maker Market, and more.

In a phone conversation with James last night, he said he was “ecstatic about the festival.” He said approaching bands has been a fun journey, particularly as he’s introducing a new festival and it was particularly fun to have their top choices say, “yes.” He said he and the Dirty Guv’nahs have always been about working with others in the spirit of the early days of festivals, such as Bonnaroo.

A lot of the connections they’ve made with artists along the way have come into play as they met them along the way. They met Grace Potter over a decade ago at Bonnaroo and, in subsequent years, have opened both for her and for St. Paul and the Broken Bones. They wanted bands with the same collaborative spirt and think they’ve found them. He said he wouldn’t be surprised to see guest appearances across bands at the festival.

I mentioned I have been listening to Jackie Venson and he said she plays “authentic, organic music,” and he expects people who have never heard her will leave the festival as fans. He said picking the bands, including Jackie, started as soon as the previous festival ended and has been a wonderful collaborative effort between the band, Born and Raised Productions and Dogwood Arts.

Tickets go on sale tomorrow, Friday, January 27 at 10 am. During the Early Bird period tickets will cost $85 for general admission to the two day festival and $225 for VIP (with access to premium viewing area, hangout space with private bars and restrooms, festival merchandise, and more). The prices will later rise to $95 and $250. Single day tickets are not mentioned at this point.

Check out the following videos for some of the great music you might expect at the festival.